Sir Tim Shadbolt: "If you want boredom, there’s plenty of options. But if you want an exciting journey, you get aboard the Sir Tim train." Photo: Stephen Jaquiery
Invercargill's mayor is the centre of a TVNZ story about his early life and tumultuous ninth term in office. Over Zoom, he gives a blow-by-blow analysis of the piece.

It’s 9am on a sunny Tuesday morning in Invercargill, and Sir Tim Shadbolt is scheduled for a video call to dissect Television New Zealand’s current affairs story that aired two nights before.

It took a critical look at Sir Tim’s tumultuous ninth term as mayor of Invercargill and ended with long-time friend Sir Bob Harvey telling him it might be time to consider hanging up the mayoral chains.

Two days later, Sir Tim is ready for a frame-by-frame analysis of a southern political story, which once again has him as the focal point.

At 9.21am he calls to say he is worried that "with so much going on, the public are sick of the b**ching".

But after some discussion he is back on board, and the Zoom cameras are rolling.

The documentary begins with Sunday host Miriama Kamo asking if it is finally time for the "Peter Pan" of Kiwi politics to leave the stage.

"Not bad..." Sir Tim offers, "I don’t know, they might confuse me with Tinker Bell."

The mayor is all smiles as pictures of supporters and critics flash up on the screen. One by one, they provide their two cents on the situation.

There is a mixture of opinion in Invercargill, it seems. Some people say Sir Tim the best thing that has ever happened to the city, others say it's time to go.

Asked if he knows any of the vox-pop contributors personally, Invercargill’s most recognisable face admits they are all strangers before breaking into an articulate summary on his view of the situation.

"It's a popular concept that ‘Oh Tim you’ve done your job, you’ve put Invercargill on the map, but it’s time to retire’. Now that would be a simple solution. For me, it’s not even worth looking at.

"My dad died fighting for democracy. And I think if you get elected, it’s for three years, and I’m not a quitter. You’ve got to do your time. And that’s why I’m hanging in there."

We are about one minute into the video. 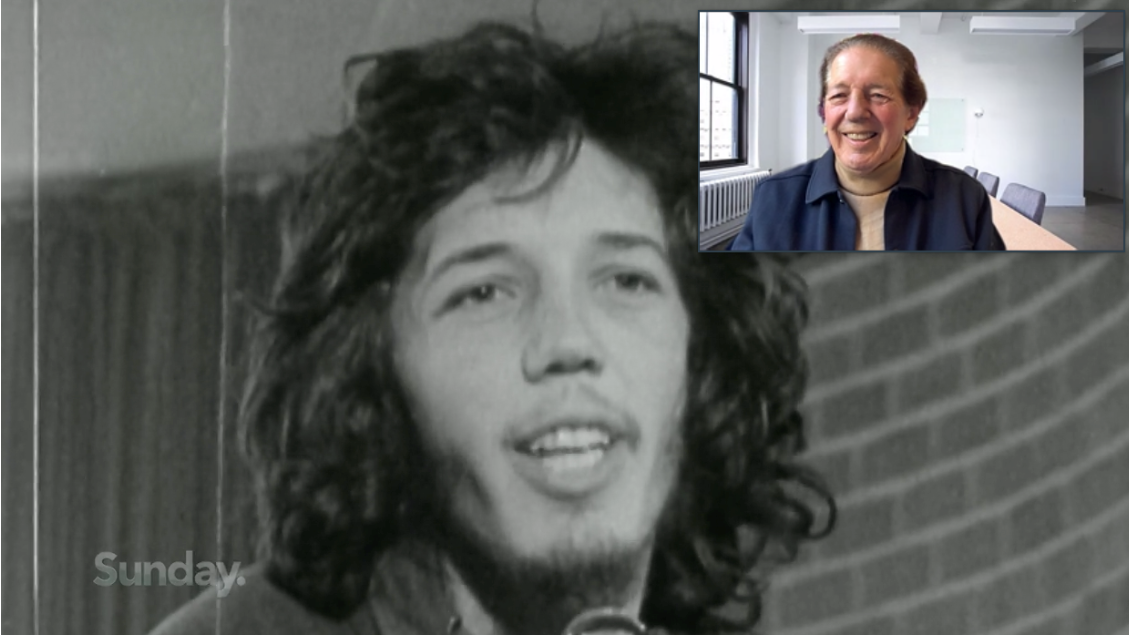 Sir Tim reacts to a clip of his younger self as he watches the TVNZ story. Photo: TVNZ/Sunday
As archival footage of Sir Tim’s activism and early political days play out on the screen, the 74-year-old sits back in his chair with a big grin spread across his face, seemingly mesmerised by his own history.

Sunday asks if he was a hippie. "Too right," he replies. Two sets of Sir Tim’s smile appear on the computer screen.

The story rolls on with a mention of his autobiography (Bullshit and Jellybeans) and a nod to the fact he has been arrested 33 times.

Then it enters a difficult patch in his history. After failing to gain re-election in Waitematā and running unsuccessfully in Auckland and Dunedin, the man who seems determined to be mayor at all costs finally strikes gold in the 1993 Invercargill election.

Later there is a shock revelation: Sir Tim and his partner finally reveal what led to the mayor’s driver’s licence suspension in May this year.

It reads more like a campfire story than a cause for permanent suspension, but the mayor swerved through a roundabout and failed to stop on yellow lines when asked to by police.

Asked why he did not go public at the time of the incident, Sir Tim says he wanted to downplay what happened for fear of leading people on a wayward path.

"It sets a bad example for young kids. Boy racers, and things like that. Anything that could lead people astray, I don’t promote," he says with the video paused.

The tone of the programme is changing as interviewer Mark Crysell asks if time is catching up with Sir Tim.

"Chaos and controversy are back, and this time they’ve been joined by confusion," the reporter narrates.

Last year’s damning independent report into governance which was critical of the mayor’s performance is brought to light, and former councillor and former deputy Toni Biddle appears on the screen saying she thinks Sir Tim is unwell.

Later, she breaks down as she reflects on what she sees as a significant decline in his wellbeing.

Partner Asha Dutt talks about a common view among public that she is the puppet master, pulling the strings for Sir Tim.

Pause the video. Is that the case?

"You’ll have to talk to Asha about that," Sir Tim says, laughing.

With five minutes left in the production, Sir Tim is now sitting back in his chair looking noticeably less relaxed.

It is the dark point of the documentary, the section that shows him clearly struggling to fulfil the basic mayoral task of chairing a meeting.

That segment, filmed on August 10, was a rough day for Sir Tim.

At a closed meeting earlier that afternoon, an intercepted email was used against him which subsequently resulted in a $10,000 independent review of electronic policies and procedures at the council.

Sir Tim left that meeting feeling rattled, convinced a vote of no-confidence had been launched against him.

An hour later, his lacklustre performance was on full display for the public and the television cameras.

"I was shocked how bad it looked on TV. That’s where people want me to resign. But I’m just not in that position to be able to do it, for several reasons that I can’t spell out. In life, you’ve got to take the good with the bad!"

Is the mayor saying he wants to resign but can’t? The question is asked, to clarify.

"No, I feel that I’ve got the best job in the world, being the mayor of Invercargill," he says.

Sir Tim is in his ninth term as mayor of Invercargill. Photo: Stepjhen Jaquiery
The story is drawing to a close now, but not before two more twists.

First, Dutt reveals she was diagnosed with cancer last year, but has since made a full recovery.

Then, in a candid setting, Sir Tim’s long-time friend Sir Bob, who flew down for the feature, asks if it could be time to hang up the mayoral chains.

Sir Tim responds by saying he has a "tremendous aversion to quitting", and is determined to see out the term.

Over video call, he adds that he was not surprised by Sir Bob’s suggestion, saying a lot of people shared a similar sentiment. Could they be seeing something that he is not? Sir Tim says no.

"I think it’s an honest expression of how people feel towards me, and how they feel about their city. To have won so many elections is a statement in itself."

The current affairs piece concludes with the mayor of 28 years proclaiming he will run until the people remove him.

"If you want boredom, there’s plenty of options. But if you want an exciting journey, you get aboard the Sir Tim train," he says, as the lights dim.

So what did he make of the end product?

At a time when debate is swirling over whether Sir Tim is fit for the job, one thing cannot be denied: the man at the centre of all the attention still has a potent love for the city he represents.