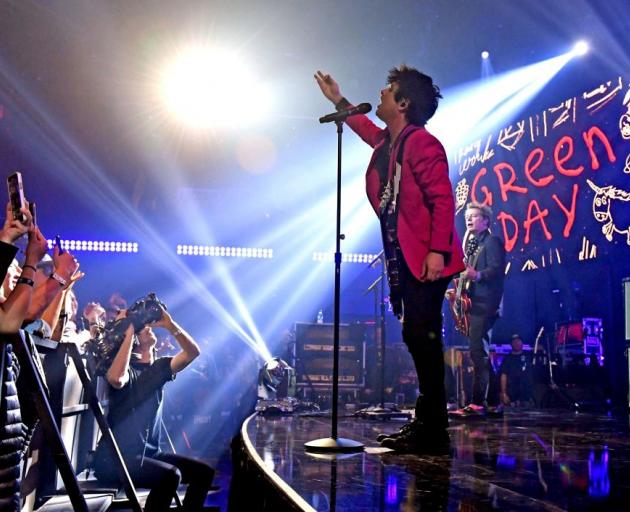 Billie Joe Armstrong of Green Day performs onstage in California earlier this year. Photo: Getty Images
The Hella Mega Tour, which included headliners Green Day, will no longer be going ahead at Forsyth Barr Stadium, after it was cancelled due to Covid-19.

Promoters say the Australasian leg of the Hella Mega Tour, headlined by Green Day, Fallout Boy and Weezer, has been cancelled due to Covid-19 travel restrictions.

The statement from Live Nation also cited "continuing restrictions on mass gatherings". However, this is not currently a restriction in New Zealand under Covid-19 alert level 1.

An update on Hella Mega Australia and New Zealand pic.twitter.com/e4WHVVbUiC

A statement from the bands said the groups are "beyond bummed" to announce the tour dates are cancelled.

The three US acts were to be supported at the New Zealand gigs by Kiwi band The Beths.

"We kept trying to put this piece of the puzzle together, but unfortunately it's just not possible due to the uncertainty of the government Covid-19 travel restrictions, mass gatherings and most importantly for the safety of our fans, crew and staff.

"We love you all and we'll be back rocking with you at some point. Until then, stay safe."

Ticket holders are entitled to a full refund.

Green Day announced the co-headlining tour on the back of their 13th studio album, Father Of All.

The band were set to play shows in Australia in Melbourne, Sydney and Brisbane. Earlier in the year, the band cancelled their original Europe, North America and Asia tour legs due to the Covid-19 outbreak.

Back in February, Green Day, Fallout Boy and Weezer teased their tour plans in a series of tweets by posting both the New Zealand and Australian flags.