0 Comments
Six60 are set to embark on their biggest tour yet this summer, and it will be music to the ears of their fans desperate for live shows.

The planned March/April 2022 tour will be New Zealand's first-ever all-stadium national tour - yet another significant achievement for the band who formed during their university flatting days in Dunedin.

They are due to play in Christchurch on Saturday, March 19, at Orangetheory Stadium.

Speaking to the Herald from Los Angeles on their US tour, frontman Matiu Walters expressed how lucky he feels to be able to play to real crowds.

The band have MIQ spots booked so rest assured they will make it back into the country, pandemic permitting.

"New Zealand went into lockdown and a week later we were scheduled to leave, so I feel for everyone back home," Walters said, reflecting on the band's recent shows in California and New York City.

The vibe of the crowds will no doubt be similar to the band's New Zealand shows this summer. Fans in the states are finally experiencing live music again as pandemic restrictions lift across the country. 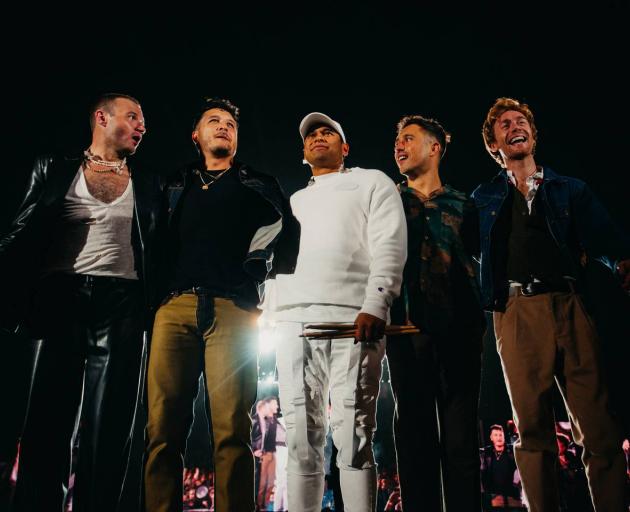 Six60 will embark on a national stadium tour next year. Photo: Supplied
Six60 have been fortunate that the pandemic hasn't impacted their NZ shows - the band was able to play their historic show at Eden Park in April. And this summer, they're returning to replicate the scale of a stadium show nationwide.

"Eden Park was always one of our dream venues to play, and all Covid did was make it way harder. We had to sell it in five weeks, which just made that show even more ridiculous," he says.

Another dream ticked off the list, another huge milestone achieved. So what's next for Six60? First, they have their sites set on breaking the record to playing to the most people in NZ on a single tour, and a new album is also in the works.

"We're in the early stages of our next record," Walters says.

And the band still has plenty they want to achieve during their next phase.

His pitch for fans to come out and support the band on their tour is simple: "They'll be the shows of the summer, we're coming back to save summer."

Presales begin on Friday, October 29, and tickets go on sale to the general public from Monday, November 8.