Prime Minister Jacinda Ardern talked up the strong connections between the United Kingdom and New Zealand during a packed visit to London on Friday in which she met Prime Minister Boris Johnson and reflected on her OE working for former Prime Minister Tony Blair.

She even talked up the two countries' shared love of British game show The Chase.

But the visit took a slightly darker turn, with Ardern using a major foreign policy speech to warn of "growing unrest" in the Pacific, which she said was partly down to growing Chinese assertiveness.

Her first stop was 10 Downing Street, where she signed a new visa deal with Johnson. The deal will expand the working holidaymaker scheme that allows New Zealanders and British citizens under the age of 30 to live and work in each others' country for two years.

Under the terms of the new scheme, the age limit has been lifted to 35, and the length of the visa has been extended from two to three years. The new rules will kick in by 2024.

"The UK is one of Aotearoa New Zealand's oldest and closest friends and partners," Ardern said and the visa changes "reflect the depth of the NZ-UK relationship".

Ardern had lunch at Downing Street with Johnson. They were later given a performance by Ngāti Rānana, the London Māori cultural group, in the Downing Street Garden.

For Johnson, the visit was overshadowed by yet another domestic political crisis. Johnson has been out of the country for a week, and has faced persistent questions about his leadership. In the last day, his deputy chief whip resigned after admitting he had "embarrassed [himself] and other people" after he "drank far too much" - it has been alleged he groped two men.

As Johnson escorted Ardern into Downing Street, British media could be heard asking whether he was "drowning in sleaze".

Ahead of their meeting, Johnson said he was pleased to welcome Ardern to the UK on her first visit there since the Covid-19 pandemic.

"I want to say in particular a word of thanks and praise to New Zealand for the very strong line you take on Ukraine." 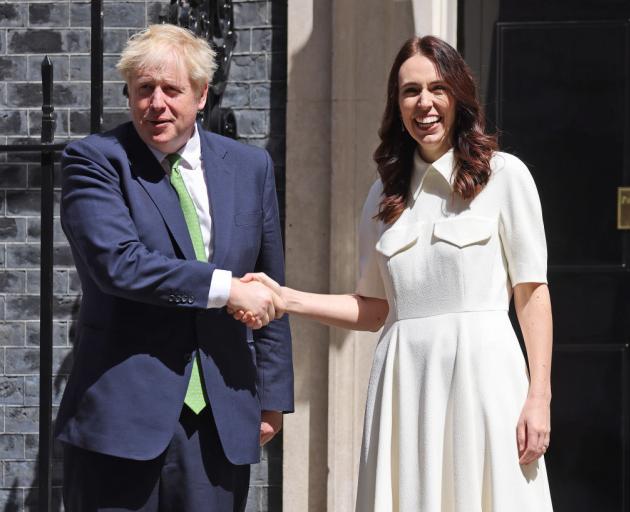 Boris Johnson with Jacinda Ardern at Downing Street. Photo: Getty Images
Ardern drew attention to the fact that part of New Zealand's response to Ukraine was UK-based New Zealand forces training Ukrainian soldiers in the use of artillery.

She returned to the theme of the OE in a speech she gave to the famous British policy institute, Chatham House, in the afternoon.

"I was one of many, many New Zealanders who spent several years working in the UK as part of what we colloquially call an "OE", Ardern said, noting that the job she had before coming to London was for then-Prime Minister Helen Clark, who is now a president of Chatham House.

Ardern joked that her job in the UK, working in the Cabinet Office first under Tony Blair, and later under Gordon Brown was, for some in her family, "the high point" of her career.

"At least you would think so from the flurry of text messages last week from cousins and aunties to tell me that the question 'which world leader worked for Tony Blair' appeared on The Chase," Ardern said.

But the speech took a darker turn, warning that New Zealand's region of the Pacific faced "growing unrest".

"The order that has brought the region prosperity of the last eighty years is contested," Ardern said.

She warned the "rule of law is challenged in the South China Sea where we are seeing the construction of artificial islands" and warned that "China, our number one trading partner has become increasingly assertive" in the region."

Ardern was careful to say that China's presence in the Pacific was "not new", and that it would be "wrong" to "call out their mere presence when we welcome engagement on the Pacific regions' terms from others" - a likely reference to the United States. 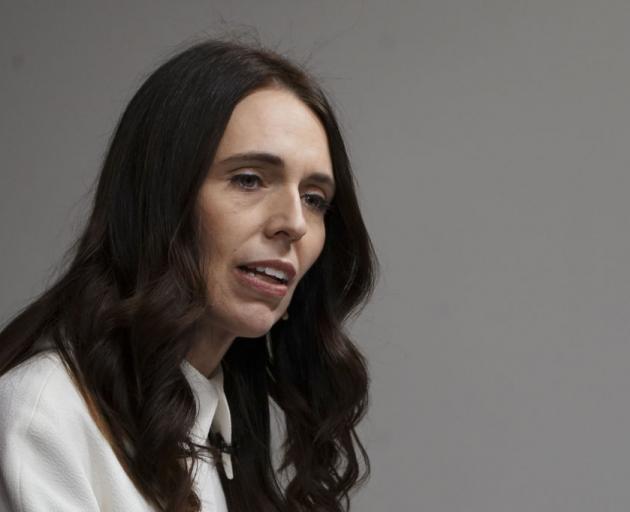 Jacinda Ardern: "We actively seek relationships with those who share our values, whilst never losing sight of the importance of dialogue with those who don't." Photo: Getty Images

But she said the challenge was the "nature" of any engagement, and whether it was on the terms of the Pacific, or China.

It is not the first time Ardern has warned of growing unrest in the Pacific while in Europe. She made similar remarks at the Nato leaders' summit in Madrid this week, which the Chinese Embassy in Wellington described as "wrong" and "regrettable".

But the Prime Minister was careful not to sound too much like she has fallen into the America-led anti-China camp, saying New Zealand's was "fiercely independent".

The speech was a plea for a more interconnected world, with strong institutions like the UN, and where countries recognised they were each dependent on one another. She said the nations needed to "pull, on our own terms, in the same direction".

Each generation of New Zealanders learned that they were interdependent with the rest of the world, she said.

From the 1981 Springbok Tour, to the nuclear-free movement and Rainbow Warrior bombing, to the hole in the Ozone layer, each generation of New Zealanders had some formative experience where they learned just how interconnected the world could be.

She said the pandemic and war in Ukraine had once again shown how interconnected the world could be, and how important it was to have functioning institutions like the World Health Organisation, the World Trade Organisation and the United Nations.

Ardern said she "welcomed" the UK's trade and foreign policy interest in the Pacific region, from its application to join the CPTPP trade agreement, to its wider policy "'tilt' to the Indo-Pacific".

"Of course, you never left the Indo-Pacific, but your deliberate effort to increase your presence across the domains of diplomacy, defence, development and trade is welcome."

But she had something of a warning for "European and American" countries whose interest in the region was triggered by the fact it was contested by China.

That warning was that engagement with Pacific countries had to be on the terms of those countries - "their own terms and priorities".

Ardern has repeatedly urged countries in the Pacific not to talk down to Pacific nations, but to engage with them on important regional priorities like climate change.

She wraps up her European tour in London tomorrow. She will have a private meeting with Prince William and attend London's Pride parade before flying to Australia.