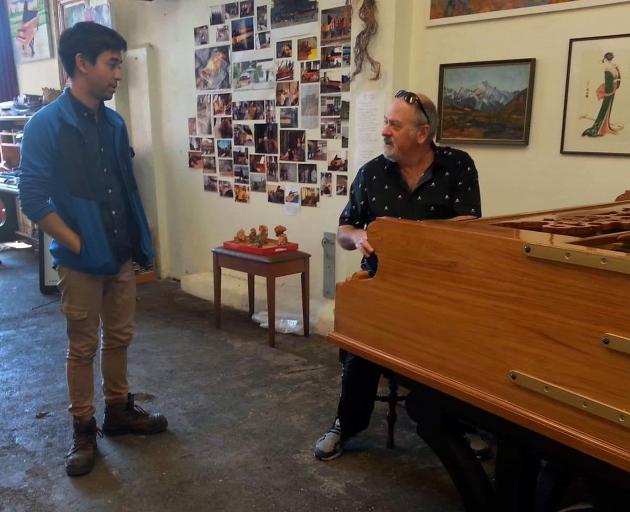 Dunedin man Adrian Mann (left) was shocked when Queen’s keyboardist Spike Edney turned up to play the 6m-long piano Mr Mann made, following an email he had sent to Queen guitarist Brian May. Photo: Supplied
A Dunedin man was left wondering if it was real life, or just fantasy, when he received a late night email from a rock legend.

When Adrian Mann emailed Queen guitarist Brian May on Sunday night to invite him, or anyone in the band, to play the piano he built, he never expected a response.

He was keen for them to see the piano, which at 6m is believed to be the longest in the world.

He said he found ‘‘a whole lot’’ of email addresses online and so he tried them all, but expected them to be fake.

To his surprise he received a reply.

May had asked Mr Mann for a photo of the piano.

‘‘I sent him a picture and then I thought I better tell him where it is, so I sent the address and said, ‘I will be there from 9am’.’’

He then received another response from May which said ‘‘Wow. Amazing! Bri’’.

The excitement did not stop there.

He believed May sent a message to his team because later that day keyboardist Spike Edney, who is touring with Queen, called in.

‘‘Then I played for him while a friend walked him around to the good sounding spots of the piano.’’

He gave Edney a copy of his book and in return the keyboardist gave him two front row tickets and guest passes for the Dunedin concert that night.

‘‘It was a mind-blowing incredible experience, I will never forget.’’

Edney told Mr Mann to keep him updated on his next piano.