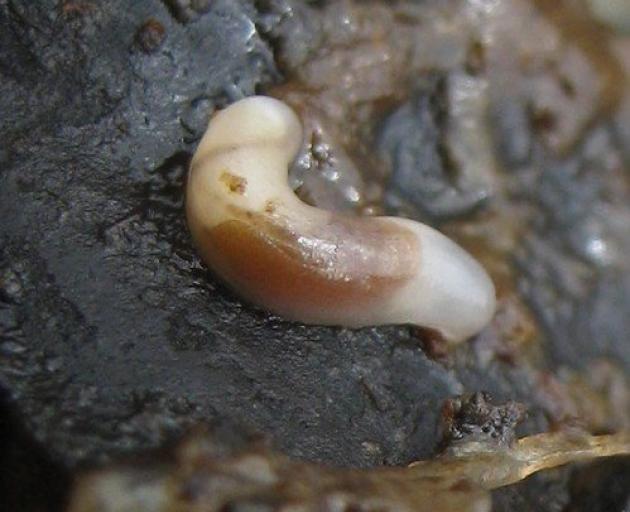 Smeagol, a rare gravel maggot, has been found by researchers and rangers on a remote beach 85km south of Haast. PHOTO: SUPPLIED/ WILDWIND, INATURALIST
Marine ecology researchers are delighted to have discovered a slimy creature called "Smeagol" has been secretly living in soggy South Westland.

Smeagol is the scientific name for a very small sea slug or "gravel maggot" that until this year had only been found on one small beach near Wellington and another beach near Kaikoura.

It is named after the light-deprived, secretive ring bearer, Gollum, from J.R.R. Tolkein’s The Lord of the Rings.

In the story, Gollum is a hobbit called Smeagol, and earned his onomatopoeic nickname after he succumbed to the evil allure of the One Ring and became a gurgling river dweller.

A team of University of Canterbury scientists and Mahaki ki Taiao rangers were monitoring the ecology of the Hautai Marine Reserve, 85km south of Haast, for the Department of Conservation, in January.

The reserve was last monitored in 2017 and they were looking for any changes.

Despite Covid and wild weather, the trip to New Zealand’s most remote marine reserve was a great success, they said.

"We saw a large storm system approaching and managed to squeeze this work into a tight weather window, and get helicoptered out shortly before it hit," researcher Shawn Gerrity said.

During the trip, the team used a new eDNA technology for detecting the presence of species.

This works by passing seawater through a very fine filter to collect DNA fragments left by plants and animals.

The fragments were sent to Wilderlab in Wellington to be analysed.

About 500 different species were detected in the Hautai Marine Reserve, ranging from bacteria to dolphins.

West Coast marine ranger Don Neale said the team was "incredibly shocked and delighted" when the results confirmed the presence of Smeagol in the sample.

"The gravel maggot has a similar lifestyle [to Gollum], living up to 30cm down under the gravel beach surface. That makes it very hard to find and study, but the eDNA method is one way to do that.

"It has previously only been found in two places — a small beach on the south coast of Wellington, which was thought to be its only home, until it was discovered that a genetically distinct population also exists in Kaikoura," Mr Neale said.

The scientists do not know yet if the new population at the Hautai Marine Reserve is its own species or related to one of the two known populations, 750km and 950km away.

"To figure this out would be a pretty major undertaking. We would need to go back in to Hautai and spend some time digging carefully around gravel or under boulders to see if we can find any live gravel maggots there," Mr Neale said.

That is not likely to happen any time soon, considering access to the study area requires a helicopter or a two-day walk from the nearest road end.

Mr Neale hopes there will be a search next time monitoring is done.

Little is known about the Smeagol sea slug or its ecological role.

Mr Neale said they likely had some role to play in recycling nutrients from beach-cast kelp back into the ocean ecosystem.

"Their name, ecology and threat status all give Smeagol a bit of an iconic status. And it goes to show how much more there is to learn about our marine environments, with dozens of new species discovered in New Zealand every year," he said.