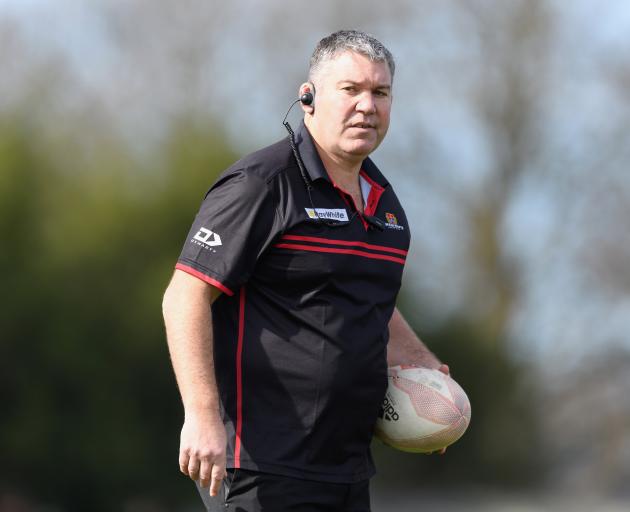 Mark Brown. Photo: Getty Images
Mark Brown never quite made the step up to provincial rugby amid stiff competition for a start in Otago’s formidable loose forward trio in the 1990s. So he switched focus to helping other talented players reach the top, while also running a surveying business in Christchurch. The Canterbury co-coach details his job sharing arrangement and goals with reporter Chris Barclay.

Your co-coach Reuben Thorne needs no introduction to even a casual Canterbury rugby fan, if there even is such a thing. What can you tell us about your playing career as a blindside flanker?

I played down in Otago, I’m from Mosgiel. I played the majority of my rugby for Taieri and Otago University. I was on the fringes, I played a bit of Otago B but there were some pretty handy loose forwards down there in the 1990s. Jamie (Joseph), Taine Randell, Kelvin Middleton … Arran Pene. I went up to the North Island for work and ended up playing in North Harbour for a couple of seasons. I was on the fringes of that squad too, Troy Flavell was there. After there I went overseas and played in Scotland and Ireland for five years.

When you were in Dundee and Dublin you decided to try and make it as a coach. Is that how a southern man ended up in Christchurch the city – and the rugby club – in 2003? 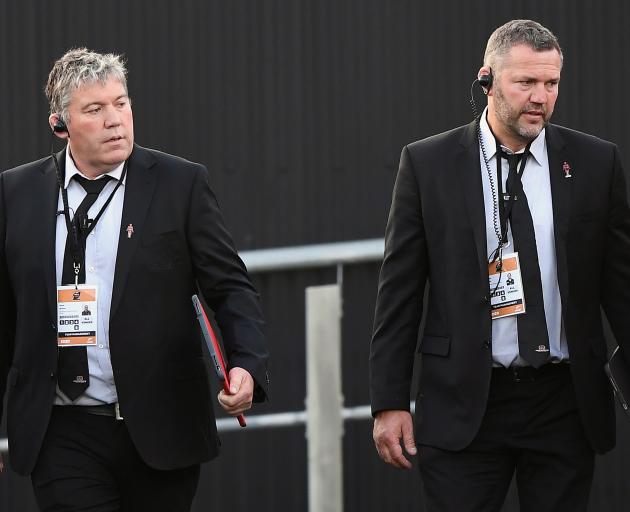 Mark Brown and Reuben Thorne. Photo: Getty Images
When did you start coaching?

I broke my wrist, and broke my jaw. It (the jaw) was a collision at training. It knocked my front two teeth back and I got a hairline fracture so that was it. I coached at Christchurch for two years and then started a family (Brown has a daughter Maddi with wife Sharlene). Club coaching is a hell of an undertaking time-wise, commitment-wise. I pulled back and then I got approached to coach the Canterbury under-18 side. You go out and watch rugby on a Saturday in a selection capacity and then the rep season is only five to six weeks long. I was able to stay involved but not with the time commitment that was needed for club rugby.

How did your representative coaching career grow from there?

I did two years at the under-18 level, then I did the under-20s. The national under-19 tournament started in 2014. I did that for three years, that really kick-started me at that level. We won the tournament in 2015.

We had Jordie Barrett and Brett Cameron, a lot of boys that are playing all round New Zealand. Then I joined the Canterbury coaching staff (under Glenn Delaney) as an assistant forwards coach in 2017.

Your association with Reuben Thorne started at Mitre 10 Cup level. You both wore the No 6 jersey, what else did you have in common and how has your combination developed?

Reuben came on board as an assistant a couple of years ago. Before then I just admired him from afar, just followed his career. We’re pretty closely aligned personality-wise the way we do things and see the game. We sort of clicked quickly. We couldn’t really see a clash of philosophies. Joe (Maddock) moved on (at the end of 2019) and we didn’t actually have any intention of applying. It was quite a last-minute decision.

We thought we’d have a throw at the stumps for something different. Instead of waiting to see if we could maintain our current roles with a new head coach – that’s the whole thing about rugby, it’s an uncertain occupation. Whether you’ve got a job as an assistant next year depends on the head coach. It’s results-driven, there’s so many factors. We thought the way to make sure we’re still involved is to be the head coach. It’s a first for Canterbury but Tasman had done something similar last year when they won with Andrew Goodman and Clarke Dermody. 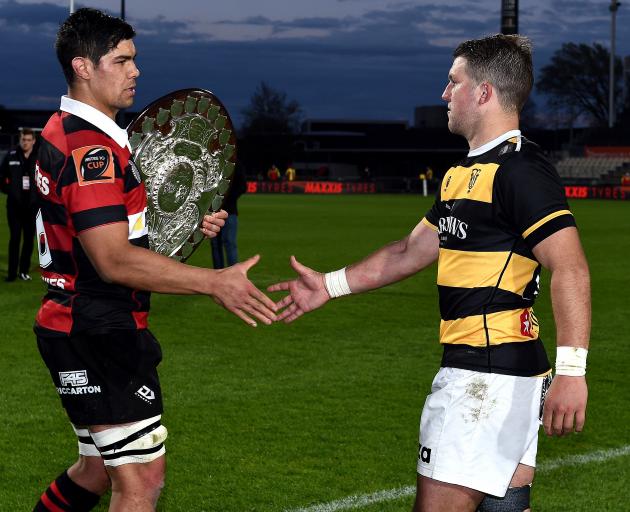 A low point of Canterbury co-coach Mark Brown's season so far. Reed Prinsep hands the Ranfurly Shield to Taranaki captain Teihorangi Walden at Orangetheory Stadium on September 19. Photo: Getty Images
What was the original motivation to transition into coaching?

The appeal was I just love the game of rugby. I always studied it and had a good knowledge of it. It was pretty clear I wasn’t going to crack it as a player so I still wanted to try and crack it. That’s the guts of it.

Did your coaching priorities change once you picked a clipboard?

Absolutely. My motivation at the start was I wanted to be involved with rugby at the highest level I could. Then when I became a coach it became less about the success for myself and actually about watching others you coach succeed. That’s why I do it now. I get a great kick out of having some small part to play in someone’s career.

To that end, how rapt are you that a young forward pack – six members of last year’s Canterbury under-19s played Manawatu earlier this month – is making encouraging progress in the Mitre 10 Cup?

The number of young players that have played big minutes this year, it’s a credit to them the way they’re coping with the step up. We’ve got a really good system with that under-19 programme. We’ll always have a good grounding of players, the hardest thing is keeping them here because they do become quite attractive to other unions. If we’ve got a logjam in a certain position, they can be sitting ducks. 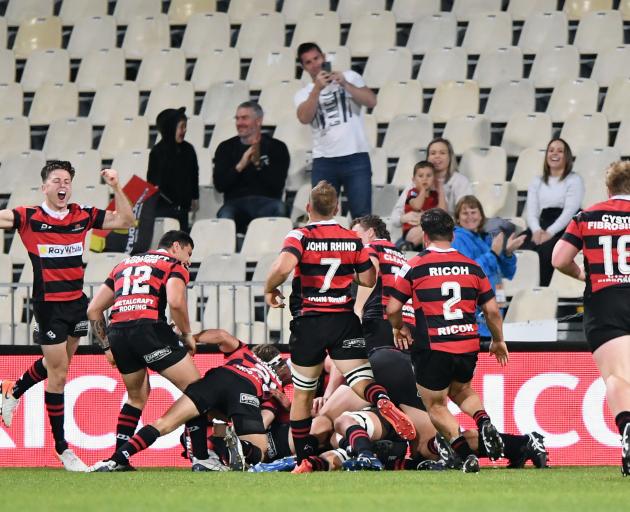 I haven’t really spoken in depth to Sam about his reasons why . . .  I don’t think it was just about who was in front of him (Sam Whitelock, Scott Barrett, Luke Romano, Quentin Strange, Mitchell Dunshea). I think he wanted to get out of his comfort zone a wee bit. At the very least if they can’t for you at least they’re playing at the level they should be playing.

In the professional era rugby coaching at the top level is invariably a 24/7 gig, but you’re multi-tasking aren’t you? Tell us about your ‘day’ job.

It’s at a planning, civil engineering and surveying company (Davie Lovell-Smith in Addington). We predominantly do land development work, we do a lot of subdivisions, particularly in Selwyn. I’ve been brought up in that development environment.

My father was a bit of a developer in his time. My role is I basically deal with the council, get all the consents and approvals in place. I coordinate all the consultants and do a pseudo project management type role as well. I’ve got a masters in planning, it’s good to be able to put that to good use. I still value my professional work career as well as the rugby side of it so to be able to balance the two, I feel really privileged.

How do you manage your work and play commitments on a weekly basis?

During a normal working week, Tuesday-Wednesday-Friday is rugby. I’m fully immersed in rugby during the day then I get home, take a breath and then crack the laptop for a few hours.

You must have an understanding boss?

I’m one of the owners but the other two guys (Andy Hall and Martin Hayes) are really supportive. I’ve got four or five staff under me and they just get on and do it without me being there.

Are they rugby fans? Do they also give you a performance review in the cafeteria on Monday morning?

They’re not short of an opinion. Our engineering department has a reasonable proportion of rugby players (from Canterbury University).

Was it tough turning up for work after Canterbury surrendered the Ranfurly Shield to Taranaki, and then also lose by a point to Hawke’s Bay – the first loss to the Magpies since 1982 – in the next round?

Reuben and I have won and lost the Shield, so I’ve had both sides of the spectrum. It was really disappointing because we really treasure it. It was difficult from a results perspective and the expectation we have in our fan base. But we knew we weren’t far away. We knew we had to make a few little changes and get a few things right. We were reasonably confident that if we made those adjustments we could get back on track. We were creating a lot of opportunities that we weren’t converting. If we weren’t doing that it’d be a little different.

How do you cope after a loss? Is it beneficial having another job to focus on?

I’m pretty even keeled regardless. You just think how you’re going to be better so it doesn’t happen again. There’s quite a nice balance there (with Davies Lovell-Smith). It gives you perspective, it’s a real handy asset with my situation.

You must be a fan of golden point after Isaiah Punivai scored off an intercept to beat Wellington after back-to-back defeats?

Having seen it in (rugby) league for years, and listening to the arguments for and against it, it’s hard to form an opinion. It’s always tough on the team that’s at the other end. No one was good enough to win it at full time. The conditions in golden point can change, referees . . .  are they courageous to keep reffing the way they reffed in the first 80?

The Mitre 10 Cup appears to be wide open, it’s a tipsters nightmare isn’t it?

It’s been heading that way for the last couple of years, it’s one thing Reuben and I noticed. We knew Canterbury had been out in front for a while but everyone was catching up. Tasman has been there or thereabouts for a while and now they’re taking the next step.

Do you ever get nostalgic about the old NPC? There must have been some decent afternoons on the terrace at Carisbrook back in the day, you must have tackled some characters in club footy down there.

During lockdown some of the games on TV . . . you see the crowds that were at Lancaster Park or Carisbrook and it was awesome. Society’s different now. This year is an exceptional circumstance but everyone loves day time rugby. Through the 90s those Otago teams played a great style of rugby that had some real characters. They weren’t your stereotypical rugby guys who just didn’t show much emotion or offer much. I think it’s still there but everyone is on guard now with social media. You can say or do something quite innocent but there’s always going to be a different perspective offered about that now, and that makes people a wee bit cautious.

You spend a lot of your week engaged in planning for the next game, or a development project. Have you thought ahead to where you’d like to be in say five seasons’ time in a coaching capacity?

Not really, you don’t want to look too far ahead because it is quite fickle. At the moment work is still firmly a priority, maintaining that balance is my priority.