Chilling out with Christchurch's gelato entrepreneur 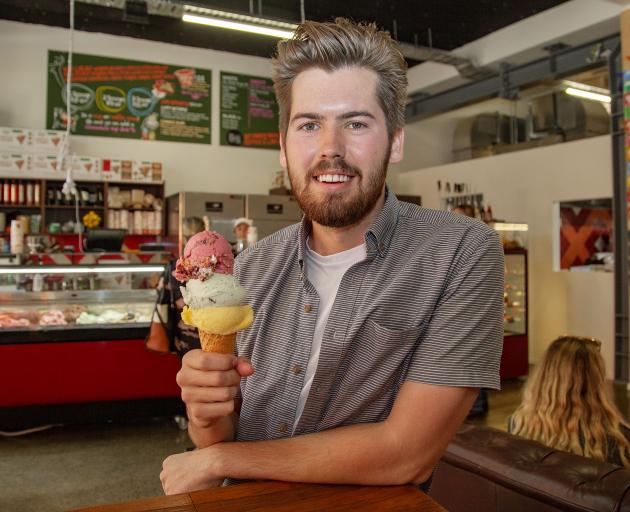 Rollickin' Gelato owner Jed Joyce with an impressive stack of gelato from his new Cashel St store. Photo: Geoff Sloan
Seven years ago, Jed Joyce was selling gelato out of a mobile cart at the age of 15. Today he owns three Rollickin’ Gelato stores across the city and is showing no signs of slowing down. Louis Day speaks with the young businessman.

Have you always been a bit of an entrepreneur?
Yes, I think I have always been a bit of an entrepreneur. When I was younger I used to sell wine barrels from Marlborough, you could use them as bar leaners or cut them in half and use them as coffee tables. I also sold swan plants and I would leave an honesty box and see if anyone had left me anything at the end of the day. At high school, I started seriously pursuing it when I started studying business studies as a subject. During my early years at high school, I spent a lot of time at The Berry Shop as a customer and I eventually got offered a job there. The owner was Jane Harrow and she taught me a lot.

Where did you grow up?
Born and bred in Christchurch. I went to St Bede’s College and Christ the King School was my primary school.

How did you come to start Rollickin’ Gelato?
We have talked about The Berry Shop and that is where I learnt about working with ice cream. When I was year 11 or 12, me and a group got offered to go on a trip called World Challenge and for that we had to fundraise to cover the costs to go over there. My idea was that Christchurch could use some gelato. I met someone in Wellington who was making gelato and got it sent down. Obviously this was after the earthquake so we teamed up with Life In Vacant Spaces to fill in a gap in the city, we were in a mobile cart. After I had been on the World Challenge trip I continued with the shop because it was going so well and I opened it full-time with the help of a uni student while I was at high school. I got to the end of high school and I could have gone to uni to study business but instead, I kept pushing with Rollickin’.

What do you like to do in your free time?
I think the gym and exercise is good, I feel like I am a lot fresher after doing exercise. Also hanging with friends and family. Tramping as well, I have ticked off a lot of great walks of New Zealand, I decided to tick off one every year. 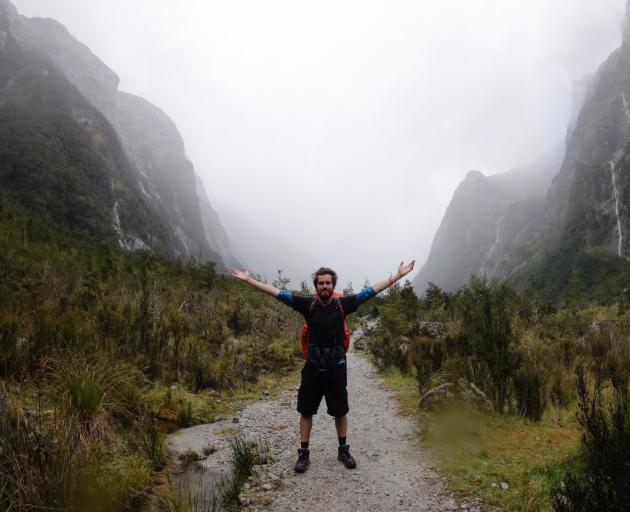 In his free time Jed Joyce enjoys ticking off some of the great walks of New Zealand. Here he is on the Milford Track. Photo: Supplied
What is your favourite part of the job?
Just being able to do what I love, something I am so excited and passionate about every day and just working with such a great team. Being from Christchurch, starting from humble beginnings with a cart and now having three shops, it is just really cool to be growing something for Christchurch.

What is your most popular flavour?
At the moment, I would say probably cashew street, that is a flavour we released for the opening of our Cashel St store. It consists of dreamy caramel gelato with chunky sweet cashew pieces, dollops of dulce de leche and chocolate cashew cream.

What is your personal favourite?
My personal favourite would be, the bloomberry. So that is coconut and raspberry whipped into creamy pink gelato, swirled with sweet blueberry sauciness. It also has fluffy housemade vegan marshmallow, layered with chewy coconut cake pieces. I love that one because we are having a lot of fun with vegan flavours and it appeals to anyone, even those with dietary requirements.

Talk me through how you make your gelato?
We have got a team of about six or seven chefs and we meet every week. We plan our flavours, we switch out three flavours every two weeks. At our weekly meeting, we talk about customer feedback, often we get lots of customer requests around new flavours and we do a lot of research around that. We also discuss ideas from staff, we have about 35 employees now. On the production side of it, our chefs start at 3.30am that’s at New Regent and Cashel Sts. So that is two people, a baker and a gelato maker. The baker makes all the inclusions like the hokey pokey the brownie chunks, the vegan marshmallow and the sauces and the gelato maker is taking all the baker’s stuff like all the inclusions and turning it into gelato.

Any exciting new flavours in the pipeline?
For Valentine’s Day we do have a few. We have love me tinder, this has sweet strawberries and cream gelato, with even more tempting strawberry layers and dark chocolate. We also will have my cookie, which is salty caramel gelato with dripping choccy fudge sauciness and a smashing trio of all your cookie favourites with chunks of housemade choc chip cookies, cookie dough and Oreos. The perfect healer for unrequited love. Finally, we have the butter me up, creamy dreamy butterscotch gelato stacked with house-made sticky date and dripping layers of orange butterscotch sauciness.

How is the new store on Cashel St going?
It is going good, it is going really well. Basically, because I have been doing it for six years, the whole point of Cashel St was to lift our dessert game. In New Regent St our kitchen was completely maxed out so to lift our game we needed more kitchen space. We have got some more kitchen space now and the whole team can’t wait to take things to the next level. 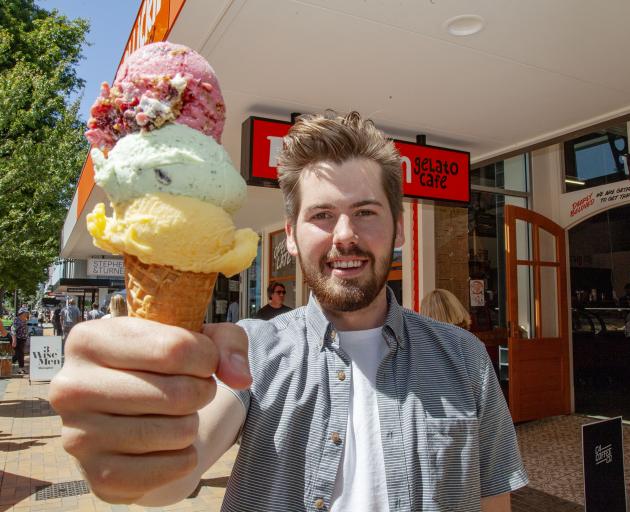 Rollickin' Gelato owner Jed Joyce. Photo: Geoff Sloan
Do you have any other plans in terms of expanding the business?
Not at this point. Maybe once we have caught our breath we will have a plan. Like me, the whole team is young so everyone has exciting ideas about what to do next, so there is so much we could do, but no official plans as of yet.

Would you rule out ever expanding the business beyond Christchurch?
No.

Do you see yourself ever getting into any businesses outside of the ice cream industry?
No. I live and breathe gelato.

In your time running Rollickin’ Gelato, how far do you think the central city has come?
Hugely far. From when I started in New Regent St more than half the street was vacant buildings. It just felt like Rollickin’ and The Last Word. Now New Regent St is fully functioning you get a lot of foot traffic. People don’t realise how hard businesses in the central city have had to fight but definitely, in the last year, it has started to turn.