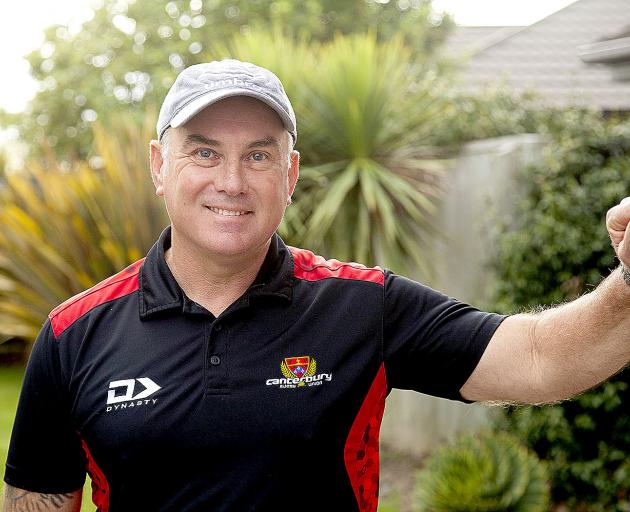 Bevan Sisson has done more coaching than he expected in 2019 after taking roles with the Crusader Kinights, Burnside and Canterbury B. Photo: Geoff Sloan.
Lincoln resident Bevan Sisson has had an unconventional but highly successful rugby coaching journey. The current Canterbury B and Burnside premier coach talks to Jacob Page

I hear you are a Cantabrian who found his way to North Harbour?

I went up to North Harbour when I was 17 or 18 and played rugby for East Coast Bays, I met my wife (Vanessa) through there as she played for North Harbour.

I was a hooker and played division one up there, made some trial teams but that was my level and we were there for 10 years.

We came back to Christchurch on a six-month trial about 18 years ago.

How was your childhood?

I grew up down here and went to Shirley Boys’ High School.

Back then, things were a bit different, I got out of there at 15, school wasn’t my thing.

I only passed one subject – English. I never went to the other exams. I’d realised I probably wasn’t going to pass (school cert) so I’d better get a job. I actually got a job before the end of that year.

I didn’t tell Mum so I’d get dressed up in my school gear walk to the end of the road, get changed and then I worked for a guy who was a monumental mason as a labourer.

How did the chance to go north come about?

I got offered a job truck driving and I ended up playing rugby as part of that.

North Harbour had Slade McFarland (former New ZealandMaori hooker) who would beat me into the rep teams.

I was going to come home after a couple of years because I hadn’t made it in the North Harbour set up but I had a friend who wanted me to stay and he offered me a job at an emporium business which was great because I was sick of truck driving by that point.

When did you hang up the boots and start to look at coaching?

It was only when I looked at it when we came back in the early 2000s, I was in my mid-30s and we didn’t know anyone so

I opened up the phone book where we were living in Avonhead and looked for the closest rugby club which happened to be Burnside.

I played one year for them and it was just to meet some guys and the team ended up winning.

The next year I was pretty broken physically and the senior B team needed a coach so I thought I’d help out and I did that for a couple of years and I realised it was a lot of fun and I kept doing it a few years.

One year we made a semi-final and that’s when I started to get a lot of satisfaction out of it.

Tell me about the move to Lincoln University?

It was 2015 and we had been living out there a while and it was time for a change.

It just made sense at the time.

Talk me through the progression there?

I was coaching the colts team and it was a great crop of guys.

Cullen Grace is one of the best products I’ve seen, he came straight out of school into our Div 1 team and played every game so he is one to watch.

What is it like to coach a team that’s expected to win each week?

I enjoyed it, I said to the guys not to shy away from it but embrace it and when you’d see the joy when teams would beat us, I thought it was great too.

Their advantage is they train there, they have the facilities that make it feel like a very professional environment.

After that I’d had a guts full of coaching but I had a good mate at Burnside in Graeme Turner who got me back into the club with the senior team which was a good fit for me at the time.

I have a very supportive wife who’s always backed my desire to coach so this year between the Crusaders Knights, Burnside and Canterbury B, I’ve done more coaching than I thought I would.

When you do get spare time, what do you do?

I like to do a bit of fishing and we have a few friends with baches that give us a chance to get away.

As a guy in my early 50s I’m reasonably realistic about where I can go with my coaching.

There’s a liking for former players at the moment and that makes sense because they know the environment but I love new challenges and seeing players get everything out of the talent they have.

There’s a heaps of guys running around playing NPC that I’ve had a hand in coaching or being around at some point and that’s immensely satisfying.

I don’t have any plans on slowing down and I’ll be back on the sidelines next year all going well.