Car that plunged into river lost, but driver fine

0 Comments
A search has failed to locate the car that plunged into the Clutha River near the Roxburgh Dam earlier this week, but the driver has been found safe and well.

Luck appears to have been on the driver’s side on multiple counts.

While escaping the unforgiving waters of the Clutha was a fortunate turn of events, it was like following a life-size game of chance in plotting out exactly how the car ended up in the river.

The Otago Daily Times viewed the crash scene yesterday where at the end of a 700m track off Tamblyn Dr, a minor road in Lake Roxburgh Village, the police had marked the vehicle’s tyre tracks with orange aerosol paint — tracking its course as it drove through a wire netting and waratah fence to the river — narrowly missing willow trees either side of it before plunging more than 10m into the Clutha.

A search was launched on Tuesday amid fears the driver might be still in the vehicle and a police plea for information, but Central Otago police issued a statement yesterday thanking the public for information that led them to find the driver safe and well.

The search concluded yesterday after a four-to-five hour on-water search by Coastguard Clyde. 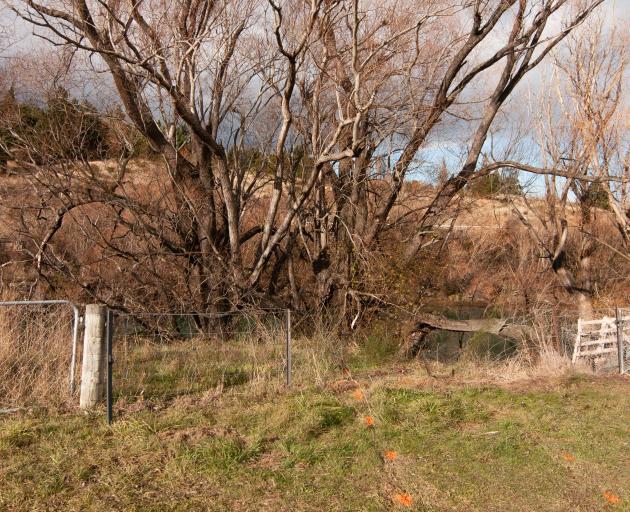 Police markings track the trail of a car that crashed into the Clutha River below the Roxburgh Dam earlier this week. PHOTO: SHANNON THOMSON
The crew, four from Coastguard Clyde, one from its Wanaka counterpart, and a police officer, used sonar and an underwater camera to find debris from the car, a royal blue Subaru station wagon — but not the vehicle itself.

That did not surprise Coastguard Clyde secretary and operational crew member Barrie Wills, who said the car could be as far away as Roxburgh, 6-7km from where it entered the water — or beyond — due to the swift flow of the river.

It was believed the car may have entered the water on Sunday, he said.

A long-term Lake Roxburgh Village resident said the Clutha River was New Zealand’s fastest-flowing and he believed there would be little left of the vehicle.

- Thursday’s story referred to Lake Roxburgh Village as Roxburgh Hydro Village. While this a common reference, it is incorrect.