Halswell, Hornby set to clash in preliminary final for right to challenge Linwood 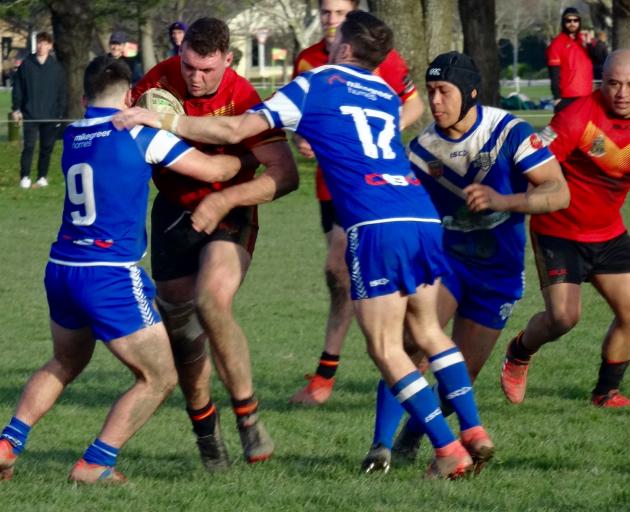 Matt Black takes the ball to the line for Halswell against the Northern Bulldogs. Photo: Chris Barclay
Halswell cleared the first hurdle as they target their first Canterbury Rugby League premier grade grand final appearance since 2014, but now another sizeable obstacle looms.

The Hornets bounced back from a heavy loss to the Hornby Panthers in the final round of the regular season to eliminate the Northern Bulldogs - last year’s runners-up - from Pat Smith Trophy contention with a thrilling 28-22 minor semi-final win after extra time last weekend.

Composure down the stretch was just what head coach Walter Wilson craved as Halswell held firm after Nick Evans broke a 22-all deadlock with a try in the final play of the first period of extra time.

"We knew we had it in us to go again, you could tell they were in the moment," Wilson said.

"The boys were pretty positive throughout the whole week training and when it came down to another five minutes we just had a bit of quiet confidence," Wilson said.

Confidence levels might have been compromised after Halswell copped a 64-12 hammering by Hornby to complete the regular season, though a scan of the respective team lists indicates the psychological scarring was minimal due to a severe injury toll.

Halswell were missing several first choice players because of knocks and age group representative commitments, the bulk of that personnel were back to face the Bulldogs.

Wilson hasn’t dwelt on the last match with Hornby, believing a 24-all stalemate in April was a more reliable form line heading into the preliminary final at Leslie Park.

"The way we played on Saturday (against the Bulldogs) we weren’t scarred by the experience. We had seven out the last time we played Hornby,” he said.

Top qualifiers Hornby needed a lifeline after they were edged 14-10 by champions Linwood, who seek a fifth successive title in next Sunday.

First XV rugby
Meanwhile, there will be a new set of finalists in the first XV championship competition with 2020 champions, St Andrew’s College, and traditional powerhouse, Christchurch Boys’ High, destined to miss next weekend’s semi-finals.

St Bede’s College head into the final round of the regular season against St Thomas of Canterbury College with a five-point buffer over closest challenger Nelson College.

St Thomas' appear not quite secure in third, while Timaru Boys’ High should secure a finals berth when they travel to face lowly Mid Canterbury Combined in Ashburton.

Fifth-placed Christ’s College can still force their way into the post-season, though a 31-30 loss to St Thomas' last weekend could yet sabotage those plans.

St Thomas' hit the front with a minute to play but missed a handy conversion to give Christ’s College a sliver of hope.

They duly scored after a stirring passage of play, only for the match-clinching conversion to strike an upright.

Knockout football
In the football, Cashmere Technical are through to the semi-finals of the Chatham Cup following a successful trip to the Waikato, where they thrashed Hamilton Wanderers 4-0.

The other successful quarter-finalists were Miramar and Wellington rivals Western Suburbs, and North Shore United.

With the Chatham Cup taking precedence last weekend, there was only one Southern League encounter, a catch-up game between Coastal Spirit and Nelson Suburbs.

The reigning champion women’s team received the Rose Bowl Trophy for the leading team at the end of the regular season after a 3-1 victory ensured they could not be caught with a round of fixtures remaining before the play-offs.

The Harewood men pipped HSOB/Burnside 4-3 to hold a one-point lead over champions Marist as they vie for the President’s Shield.

They are now the only unbeaten team in section A after four rounds.