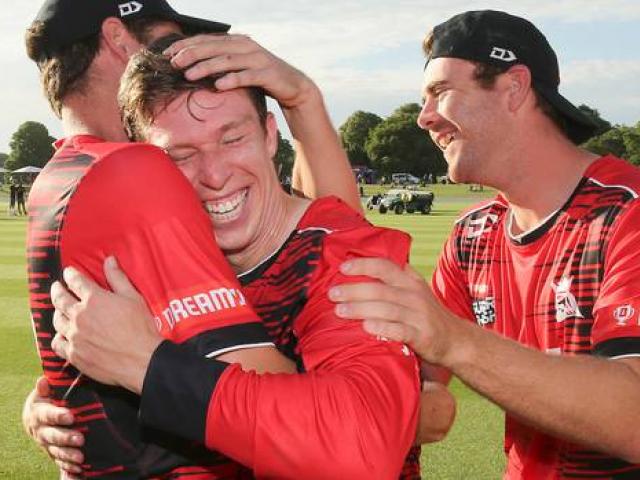 Leo Carter celebrates his accomplishment with his teammates. Photo: Photosport
Canterbury Kings batsman Leo Carter hit six consecutive sixes off an Anton Devcich over to lead his side to a massive Super Smash chase at Hagley Oval on Sunday.

Needing 220 to win, the Kings chased it down with an over to spare with Carter finishing on a remarkable 70 off just 29 balls, including seven sixes. Six of those came off the 16th over, which was bowled by the former Black Caps spinner and went for 36 runs.

It is the first time a Kiwi has hit six sixes in an over, and just the seventh time in history at a top domestic level or higher. Carter's feat led to the highest successful Twenty20 chase in New Zealand history.

It was surely the most unlikely batsman to achieve the feat as well.

"I basically just stepped across and swung as hard as I could," a stunned Carter said to Sky last night.

"I'm not so sure I got many off the middle, but pretty short boundary there, so they just carried over, I was pretty thankful for that.

"We needed a big over at that time - I was lucky enough to get a few over there."

Canterbury opener Chad Bowes hit 57 off 31 balls while Cole McConchie added a quickfire 49 from 25 as part of a 121-run partnership with Carter to help seal the win, with Canterbury needing 64 off 30 balls to win before Carter's heroics, then just 28 off 24 after the incredible over.

Northern Districts had earlier made 219/7 from their 20 overs with Black Cap Tim Seifert scoring 74 off 36 balls.

He put on 139 for the second wicket with captain Dean Brownlie, who made 55, and Seifert's knock included 29 off an over from Canterbury spinner Blake Coburn.

It looked to be the stunning accomplishment of the game - until Carter made history.