As competition finally gets underway this weekend, there's perhaps no other netballer in the country who's endured the kind of excruciating wait that former Silver Fern Temalisi Fakahokotau has.

The Mainland Tactix defender suffered a cruel injury in September 2018, ruling her out of last year's ANZ Premiership, and ruining her World Cup dream.

After a number of false starts the naturally gifted defender is finally looking at some consistent game time, when the ANZ Premiership resumes on Friday night.

The Aucklander first turned heads as an exciting 19-year-old following an impressive 2014 season with the Northern Mystics, which quickly led to a Silver Ferns call-up.

Fakahokotau subsequently slipped down the defensive pecking order before reinventing herself after moving to the Mainland Tactix in 2017.

She worked on her fitness and a supremely well-conditioned Fakahokotau produced a stellar season for the Tactix, resulting in a Silver Ferns' recall. 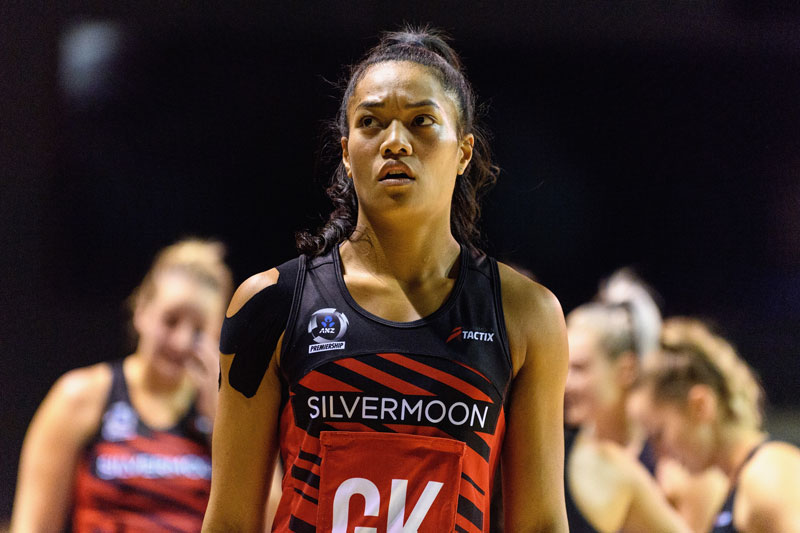 By the time the 2018 Commonwealth Games came around, Fakahokotau had cemented her place in the Ferns, but it would be the side's worst performance at a pinnacle event when they finished fourth on the Gold Coast.

Fakahokotau then had another stand out ANZ Premiership campaign, topping all the main defensive stats for the league, and thrilling with her on-the-run intercepts.

Dame Noeline Taurua was announced as the next Silver Ferns' coach and it was at her first training camp in charge that Fakahokotau ruptured her ACL in her right knee.

It was a massive blow for the 22-test defender, just as the team was embarking on a new journey.

She admits it was a difficult time but doesn't like to dwell on it.

"It did take its toll on me, I would say it was more so mental than physical. I'm just excited to be back into the team environment and be training and playing alongside the girls again," said Fakahokotau.

Was it tough watching her old team-mates achieve redemption at the World Cup in Liverpool and not be part of it?

"For me it was more so just such a proud moment that I had been a Silver Fern and for the girls that were selected, they went out there and made the country proud.

"I was sitting in Australia early hours of the morning, watching the finals and I was so happy for them, and was in tears like the whole country was so for me it was just a proud moment that those group of girls went out there and did their job and did bloody amazing."

The Silver Ferns' Development Squad member says her motivation right now is all focused on the Tactix.

"For myself to be brutally honest, my goals are just to get out there on court and do the best I can for the Tactix and not try and think too far ahead of things. Whatever happens happens but my first job and my first priority at the moment is trying to put out a full 60 minutes of consistency out for the Tactix."

Fakahokotau competed for the NZA side in October last year in practice games against England A and Australia A but was still restricted then.

Last December, she went to the Super Club competition in Nelson for the Tactix well and truly ready to have a good hit out, but after just one game had to leave after her grandfather passed away.

Then there would be another false start for the 25-year-old when the ANZ Premiership was suspended in March due to Covid-19, after she got just one game.

Fakahokotau has spent a lot of time training by herself over the past 20 months and to say she is ready is a huge understatement.

"The knee is looking good at the moment, there's no issues there and lockdown was tough having to train by myself. But then it got to a point where I was like 'I need to get things done' and then linked up with a few girls and then came back into the team environment and fitness was better than where I left pre-lockdown.

"We're quite excited, especially coming out of lockdown I think all of us were quite eager to get into a team environment so at the moment we're looking quite fresh, quite good and all quite excited for this coming weekend."

The Southern Steel, Tactix, and Pulse will fly to Auckland each weekend for the first part of the season.

"Chartered flights is not the norm, but quite exciting because it does mean we spend more time with each other. We fly up Friday, play Saturday, rest Sunday, and then play again on Monday. It's going to be quite different but we've got a few things in place for our chartered flights, which is quite exciting."

On Saturday the Tactix play the Steel, on Sunday the defending champs the Pulse play the Northern Stars. The Stars and the Tactix then play one another on Monday night.

Fakahokotau says they have done what they can to prepare for the double header weekends.

"With our training sessions, making sure that things are high intensity, we've got extra sessions that we do as well. Going into the games this week I think everybody is aware that teams will be coming out firing.

"It's more so focusing on what we need to do as a team getting our connections right and then going out there and putting everything we've gone through like lockdown into our training sessions out on court."

With the quarters reduced from 15min to 12, Fakahokotau says there won't be any holding back.

"I reckon even though it's shorter quarters, the intensity is going to be a lot higher than what it is in a 15min quarter so we're up for the challenge, going to be quite different, but yeah excited for that."

The competition resumes on Friday night when the Waikato Bay of Plenty Magic play the Mystics.