Christchurch’s first XV rugby competition gained rare, but hardly ideal, exposure when a sponsor’s representative recently veered offside with the female component of the game by ignoring them at a function. Consigned to be the bridesmaids of elite secondary rugby in the city, Chris Barclay finds the girls’ game plays an important part. 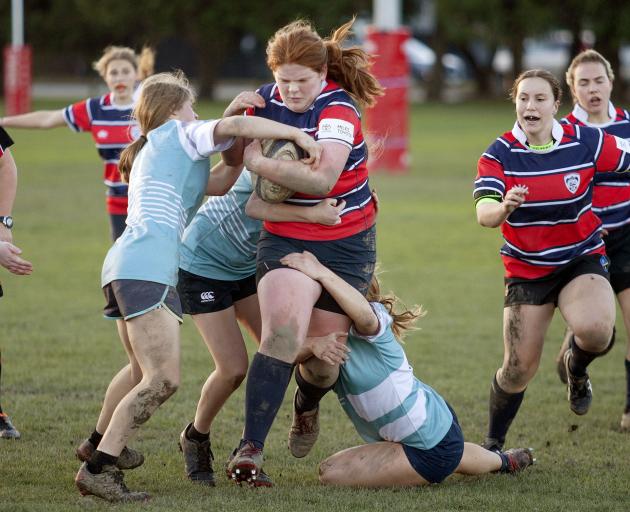 Keiana Roffey makes ground for CGHS with Jesse Stevens in support. Photo: Geoff Sloan
Gabrielle Jones delivers a perfect pass to her sister Samantha, who probes for a gap that isn’t there. After all, they are playing Christchurch Girls’ High School, the benchmark of the city’s first XV competition.

This is not a mismatch of All Blacks v Tonga proportions, though Forward Foundation were never likely to make progress, on the scoreboard at least, at Burnside Park last Wednesday.

CGHS barely concede a point on the field, and they also made a pertinent point off it when the Miles Toyota chief executive neglected to mention the female component of the competition his company sponsors at a function last month.

Mark Mills inadvertently ensured his sponsorship made headlines when he acknowledged male players, and not females, when addressing school principals, coaches and team captains.

CGHS principal Christine O’Neill was appalled at the oversight, captain Mia Cochrane said her team did not feel valued and on an equal playing field.

The first year of a three-year deal included players receiving a Miles Toyota Cup competition pin, though O’Neill said CGHS would not wear them.

Some rival players wear their pins with pride, however. At Forward Foundation they are a badge of honour if you like, a symbol of the composite’s side resolve.

“It was very cool to see the grins on their faces when they get something they can wear on their blazer,” said Foundation founder and trustee Maddy Surie, a CGHS old girl. 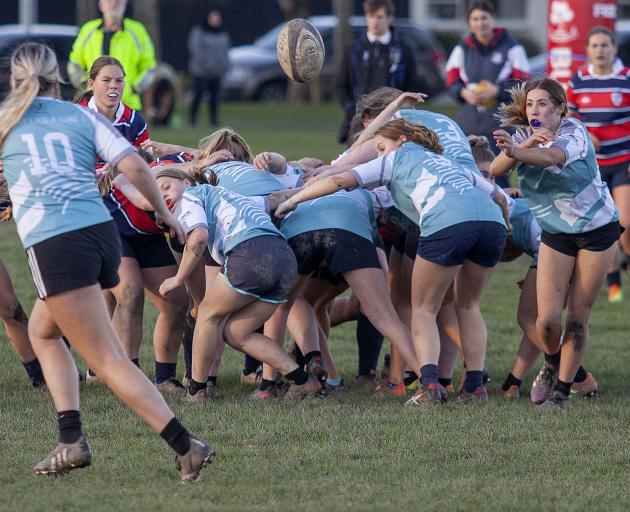 Gabrielle Jones passes to her sister Samantha as Forward Foundation launches an attack against first XV powerhouse CGHS. Photo: Geoff Sloan
Winless after four games, the Foundation has scored 47 points and conceded 216, yet they underscore the success of a concept that contributes to Canterbury’s sustained domination of the Farah Palmer Cup.

“They have quite a special bond because they’re all in the same situation of not being able to play rugby (at their school) if they wanted to. It’s really cool to see them come together during the season,” said Surie, who played for CGHS from 2005-2010.

The Christchurch-based foundation was established in 2012 with the goal of creating development and leadership opportunities for girls through sport.

“For us sport is a vehicle for those girls to build life skills. We’re using sport as a context to help them grow confidence and self-esteem,” Surie said. 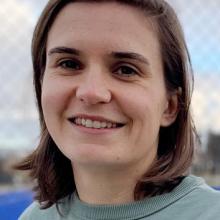 “Rugby was one of our very first initiatives to get up off the ground (in 2012),” said Surie, who was supported by school and teammates.

“We wanted to make sure other girls had the same opportunities to feel the enjoyment we did.”

Results are clearly not the bottom line as Surie reflects on the impact of a former player Lucy Cahill, a foundation ambassador.

“Lucy played for the foundation, loved it so much and got the Villa (Maria) team up and running. That’s exactly what we want to see,” she said.

There’s something else Surie is rapt to witness as she explains: “We have a girl who started with the team in year 9, this is her last year.

“When she turned up at the first game she was totally shy and not so keen to go on the field, now she’s one of the leaders in the team. To see her grow over the years … to see the confidence makes all those volunteer hours worth it to see something like that.

“She wants to stick around with the foundation once she leaves school to come back and coach.”

Surie said the competition had progressed since the foundation debuted almost a decade ago.

“It’s certainly evolved in a sense of being supported by the community. It’s really cool to see businesses come on board, and sponsors. Canterbury Rugby has put a lot of resources into the competition as well. 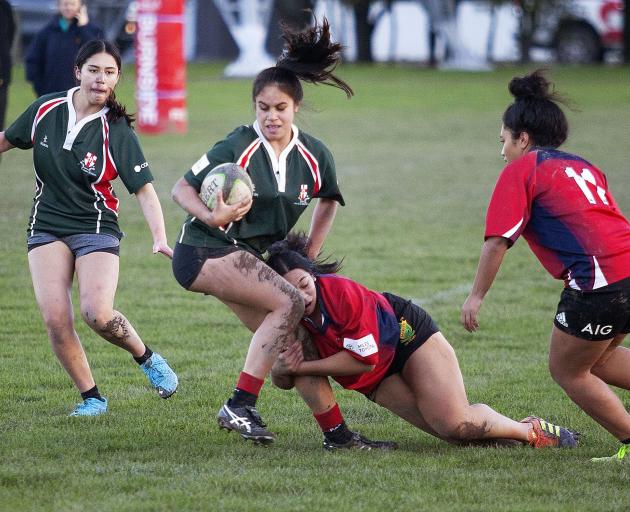 Lincoln: Rolleston College Combined player Celine Russell is tackled during the clash with Marian College: Wahine Toa. Photio: Geoff Sloan
The figures are commercially sensitive though Mills said 20 per cent is directed to the first XV competition and 65 per cent in total to women’s rugby through the FPC squad.

“Some of that money helps get more people on the grass, there’s a lot of schools and teams to get around,” Worthington said.

The CRFU funds seven FPC players to visit schools and run sessions on building culture or tactical and technical expertise.

“The competition still has a long way to go,” Worthington admitted.

“Obviously there’s a big difference between schoolgirl and schoolboy rugby, the level it’s currently played at. It would be nice to see the girls improve and grow into a better space.”

While leading boys’ teams have had former All Blacks on their coaching staff – Reuben Thorne led Christ’s College last year – Villa Maria first XV’s coaching set-up is very much old school: Parents Richard Arnott and Pete Cahill do it very much for the love of the game.

“The beauty of our team is the majority of the girls have actually never played before. They’d never thrown a rugby ball before, they turned up to the first training, they’ve learnt the basic skills and are now playing some really good rugby.”

Villa Maria have a squad of 29 and the players not required on game day instead bolster the ranks of other teams in the competition, a sporting, collaborative approach.

“The other girls go and play for Hornby or whoever else needs extra players. That way at least they’re still playing and getting a game,” Restieaux said.

Arnott has had a long association with Lincoln University and he has also coached women’s teams.

“He’s come in with the philosophy of wanting to just teach the basics. In the past we’ve found girls don’t know how to tackle and they don’t know how to fall to the ground. They would train, play their first game, they’d get a knock and they wouldn’t want to play anymore,” Restieaux said.

“We’ve focused on teaching them those basic skills so when they are on the field they’re feeling confident.”

She said a key to the side’s success and regeneration was it spanned years 9 to 13.

“That’s the beauty of it, they’re not just playing with their age groups. It’s creating quite a nice culture where you’ve got girls across all the age groups meeting one another.

“It was something different as well, girls playing rugby as opposed to netball and hockey. It’s girls that have never really been involved in a team sport before and they’ve given it a go. We made it quite clear that if you’re an absolute beginner that’s  okay, come along and try it.”

Restieaux was also complimentary of the backing supported by the CRFU, and sponsors.

“They’re putting a lot into trying to grow the game, particularly for women. They (women) can see there are some good pathways now which never used to be.”

Schools are also aligned to a club – Villa Maria are paired with Marist Albion – to further assist their development through clinics and know how.

While the girls are not on a level playing field considering the private sponsorship emblazoned on the boys’ jerseys, Restieaux was content.

“We tend to focus on what we’re doing in our school and just wanting to do it really, really well. I just want the girls to enjoy their rugby and enjoy being part of the school environment by playing a sport for your school.”

This season’s squad is a split of 60 per cent with previous experience and the remainder are newcomers. It is the fourth year the combined team has played in the competition.

Over that time frame CGHS has been the dominant force, though Marian College: Wahine Toa players still see a pathway to higher honours.

“We have a couple of girls who are in contention for that, one in particular: Manea-Faith Waaka,” said coach Dave Christison.

She has already represented Canterbury at under-18 level and sevens.

Aware the boys’ competition enjoys a higher profile and has the benefit of team sponsorship, Christison insists he does not view it through green-tinted glasses.

“No, we’re quite happy. The boys have a lot more costs associated with their competition like transportation, accommodation and so forth. That’s not an issue with us,” he said.

“We have the distinct advantage of all playing in the same venue at Burnside Park on a Wednesday.”

In contrast, the 14-team boys’ competition covers a geographical area from Nelson to Timaru.

“Since they’ve got sponsorship they (CRFU) provide a training day at the beginning of each season for specialist positions such as front row. They go through tackling and safety issues associated with various positions,” he said.

“They definitely take it seriously and without this competition Canterbury women’s rugby would not be the strength it is now.”

Marian College: Wahine Toa were third behind CGHS and Villa Maria ahead of yesterday’s matches, with five points covering third to sixth in the race to the semi-finals.

“There’s still big gaps between the top and the bottom teams but the overall standard has improved over the years,” Christison said.

“If you can go and watch a game you can certainly see some very good rugby being played.”