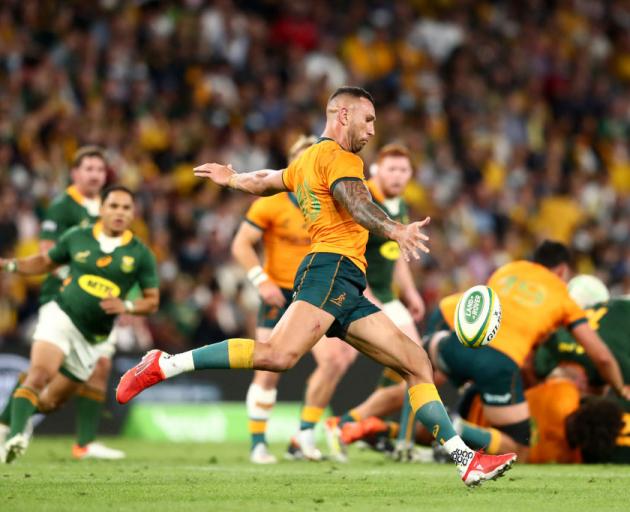 Quade Cooper of the Wallabies kicks the ball through during The Rugby Championship match between the Australian Wallabies and the South Africa Springboks. Photo: Getty Images
A resurgent Australia upset South Africa for the second time in a week, storming to an impressive bonus-point 30-17 victory in Brisbane on Saturday to help strip the world champions of their number one ranking.

The Wallabies' win left the All Blacks needing a 15-point victory over Argentina to grab top spot, and Ian Foster's men duly delivered in a 36-13 defeat of Argentina in the late match of the double-header at Lang Park.

The All Blacks' fourth successive win in the competition knocked out Australia and Argentina, while South Africa will need to capture big bonus-point wins over the New Zealanders in the last two matches to deny them the silverware.

Australia and Argentina's remaining clashes will be dead rubbers but Wallabies fans will be pleased with the improvement shown under coach Dave Rennie.

"I’m really proud of our guys because we wanted to back up last week’s performance with another good one," he said.

"A lot of courage tonight and pretty clinical when it counted.”

Having upset the Springboks 28-26 on the Gold Coast on Sunday courtesy of a Quade Cooper penalty after the siren, the Wallabies' running game shone in the Lang Park twilight as centre Len Ikitau and winger Marika Koroibete each scored two tries.

Koroibete's second put the Australians 13 points clear with 12 minutes left and the home side defended brilliantly to shut down the contest, winning two turnovers in front of their posts.

South Africa managed one try, through centre Lukhanyo Am shortly after halftime, but drew two yellow cards in a flat performance.

Following back-to-back drubbings by New Zealand, Australia have clicked into gear with inside centre Samu Kerevi transforming their attack after returning from Japan.

They have now risen to third in world rankings.

South Africa coach Jacques Nienaber apologised to fans, calling it his side's worst performance since a 32-19 loss to Argentina in Mendoza in 2018.

"We were really beaten. We got hands-down beaten in everything - defence, kicking game, attack," he told reporters.

"This isn’t a performance that was worthy enough for (the) Springboks."

Michael Hooper was at his tireless best as the openside flanker notched up a Wallabies record 60th cap as captain, breaking George Gregan's mark.

The only sour point for the hosts was a broken arm for fullback Tom Banks sustained in a tackle with South Africa winger Sbu Nkosi.

South Africa were scrappy from the start, and scrumhalf Faf de Klerk was yellow-carded early for slowing the ball in a ruck.

Ikitau was quick to capitalise with Australia's first try in the 14th minute, taking a cut-out pass from scrumhalf Nic White to burst through two tacklers in a 10-metre dash.

Barnstorming prop Taniela Tupou then crashed through to set up Ikitau's second, with a Koroibete off-load putting the centre over at the right corner.

Australia flanker Lachie Swinton was yellow-carded for a high tackle on Duane Vermeulen, and South Africa rallied to a 15-12 deficit at halftime after four penalty goals from Handre Pollard.

Two minutes after the restart, the Springboks snatched the lead through Am's try after he ran onto a De Klerk grubber kick at the right corner.

Cooper regained the advantage for Australia with a penalty before Koroibete took control with a two-try burst in six minutes.

Taking an audacious flick pass from Tupou, Koroibete bolted down the left to cross in the 62nd minute.

A Reece Hodge turnover followed by a Kerevi off-load to Pete Samu led to Koroibete's second on the same wing before Australia's defence took over to complete the confidence-building win.