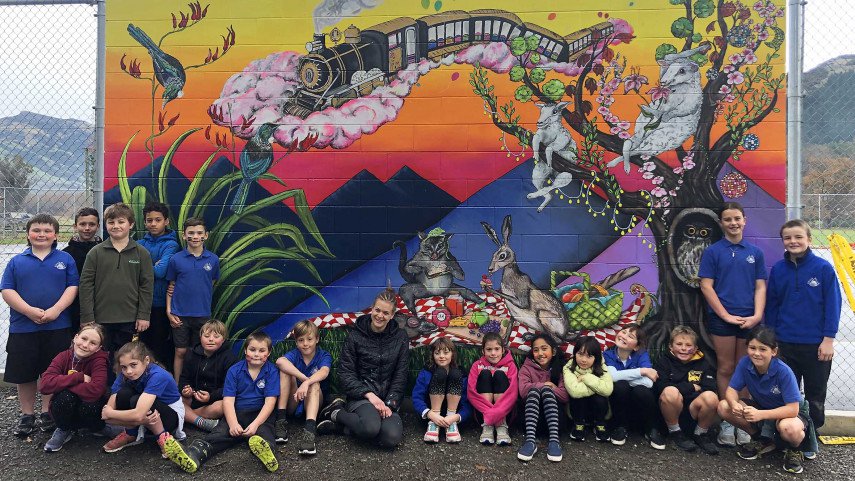 Bakker met with the year 4 and 5 pupils in February to gather their ideas on how to turn the blank wall at the tennis club opposite their school into something unique and colourful.

She showed them her Pop-Up Penguin, which raised $17,500 for the Cholmondeley Children’s Centre, and another mural she created at a zoo in Japan.

Using the children’s ideas as inspiration, Bakker put together a final design.

Copies of this were printed for the children to take home and colour in.

The city council anti-graffiti team provided Bakker with paint and for the past five weeks, she has been busy turning the children’s ideas into reality.

Because the school is right next door the children have been able to see the mural developing each day, Bakker putting in at least 100 hours of painting time.

“The children would come out and see what I was doing during the day and ask me lots of questions about the process such as how did you blend that?”

Teacher Tara Sutherland said it’s been “an unforgettable experience” for her class.

“Frankie encouraged the children to free their inner artist and let go of the need to be ‘perfect’– no idea was too crazy and everyone’s contribution was valued,” she said.

“When we thought back on the experience, the pupils said they loved working together, choosing what to do for the mural, picking the colours and knowing it’s their own work and it will stay there for a long time.’”

The mural includes glow-in-the-dark paint for the moreporks’ eyes, blossoms, and tree lights.

A second mural on the other side of the wall has been planned out by Bakker and the pupils. It will be painted in spring.

Bakker said the design for this mural includes a crown-adorned pukeko, a trout holding a lantern and eels doing somersaults.

She is also beginning art classes next term for those students who are eager to learn more about art.

The Banks Peninsula Community Board and Creative New Zealand helped with funding for the mural project.