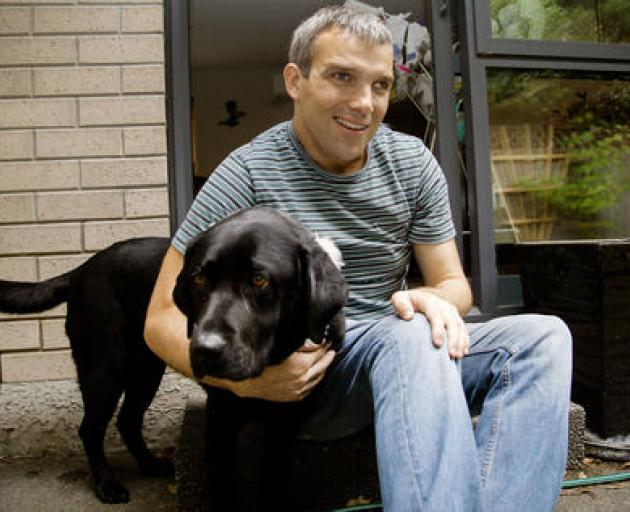 Morgan Jones and Jessie J are looking forward to what may be their last Christmas together. Photo: Geoff Sloan
As far as guide dogs go, Jessie J had a few issues from the start.
The nine-year-old Labrador has been assisting Morgan Jones of Spreydon, who is blind, partially paralysed and an amputee after falling from a train in his childhood.
Jones said he took to Jessie J when he met her six years ago; after all, who could not like her soft fur and penchant for cuddles. However, some warning signs began to surface soon after, such as her tendency for diverting from her duties to graze on grass, and chomp down on her harness as if it was a bit on horse reigns.
She has nevertheless served Jones well over the years, although has more recently displayed another trait which does not bode well for an enduring career into her golden years - that of jay walking.
"It's a bit scary," Jones said.
She had begun taking an arc out to the right when crossing the road, perhaps due to having had a fright with traffic. Guide dog instructors had tried their best, but Jessie J either would not, or could not, change her new-found habit.
Alas, this means that the black Labrador who has a proud career behind her, has been ushered into an early retirement.
News of the retirement comes after Jones and Jessie J featured in the book Friends Indeed: Assist Dogs and Their People by Sue Allison, published in October.
The story presenting the two as an inseparable duo is, however, still accurate to some degree, as Jones has kept his floppy-faced companion by his side.
The powers that be forced Jessie J into retirement just before lockdown, isolating the pair at home.
"It meant during lockdown, I was stuck at home, stranded. I couldn't go for a walk, not without someone else," Jones said.

Faithful hound, Jessie J. Photo: Geoff Sloan
However, at least he had Jessie J as company during that time.
"I would've been quite lonely without her to be honest," Jones said.
Jones is on a waiting list for a new guide dog, and could be matched as soon as next month. He is looking forward to getting his independence again, although it might mean finding a new home for Jessie J as he may adopt her out so she can gracefully live out her twilight years.
The pair are looking forward to a happy Christmas together, where Jones expects to be enjoying the company of his wider family and parents at their West Moreland home while listening to Jessie J hoovering up crumbs.
In the New Year, Jones hopes to find employment after losing his transcription job at Aviva Families when their contract changed.
The 33 year-old is not only a keen worker, he has many extracurricular passions such as going to dance classes where Latin and modern jive are his favourites. He has completed a biology degree and still hopes to land a job in the conservation sector.
At the age of six, Jones fell from a train viewing platform when the safety rail broke. He was on the way to his grandparents in the Marlborough Sounds with his father.
"It can be a challenge sometimes," Jones said of living with the resultant injuries which left him blind, partially paralysed and with his right leg amputated below the knee. However, his disability just made him all the more determined.
"It just gives you a buzz when you succeed," he said.
The Star