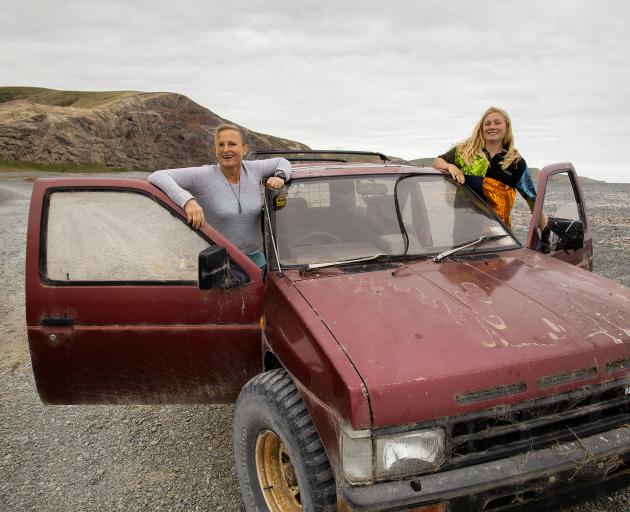 “The jingle of shame" is how Birdlings Flat residents refer to the familiar sound of vehicles leaving the settlement with shingle stuck in their wheels.

For visitors, warning signs at the top of the beach often go ignored, still opting to take the plunge from a solid car park into the deep gravel.

And because there is no cellphone reception, they usually end up desperately door-knocking at residents’ homes asking for their car to be hauled out.

Mrs Daffin thinks she has helped tow at least 100 vehicles since she moved to Birdlings Flat eight years ago.

Mrs Daffin, her husband, Mike, and her daughter, Bree, are one of the main families that rush down to help when they see a vehicle “belly-deep” in shingle.

On a good weekend, they would help pull out about four or five using a shovel, rope and their old Nissan Terrano, a “rust bucket with monster tyres.”

She manages to find humour in every encounter.

“It’s classic. The stories you get from people being stuck in there is just hilarious,” Mrs Daffin said.

“Last week, we got a husband and wife in a beautiful new Range Rover. She was saying: ‘I don’t think you should do that’ and he turned around and said: ‘What, are you scared?’ – it was within about two metres they were dead stuck in shingle.”

Mrs Daffin said a lot of the time, vehicles get stuck in the deep holes made by other people.

“One time we were having a quiz night at the community centre and two young people that were stuck ended up sitting through the whole thing until we finished.”

She said one of her more interesting tows was when she coincidentally met the grandson of the man Mr Daffin had bought their house off.

“If I hadn’t seen them there we wouldn’t have crossed paths. We invited them back here and spent a couple of hours learning about this guy and his memories in my house, it was so random.”

Mrs Daffin said there is no stereotypical person or vehicle which gets stuck and even admitted she can not be hypocritical, as she and Bree have needed saving once before.

“After that happened, word got around pretty quick,” she said.

The family doesn’t charge to tow people out, but if they want to thank them with a donation, it goes towards community events at Te Mata Hapuku Community Hall.

But it does not stop some people from showing the Daffin family how grateful they are.

“One time we came home to two bottles of wine, two boxes of chocolates, $50 cash and a thank you card. It was way over the top but I thought it was really sweet.”

Mrs Daffin is a treasurer of the community hall and is collecting photos of rescues to display across one of its walls.

“There’s a classic old photo down there at the moment of a massive Bedford bus stuck, being towed by another Bedford bus.

"Every time I’m at the community centre I look at that picture. My vision is to have a whole wall of it.”

She has gathered more than 20 photos from other residents.