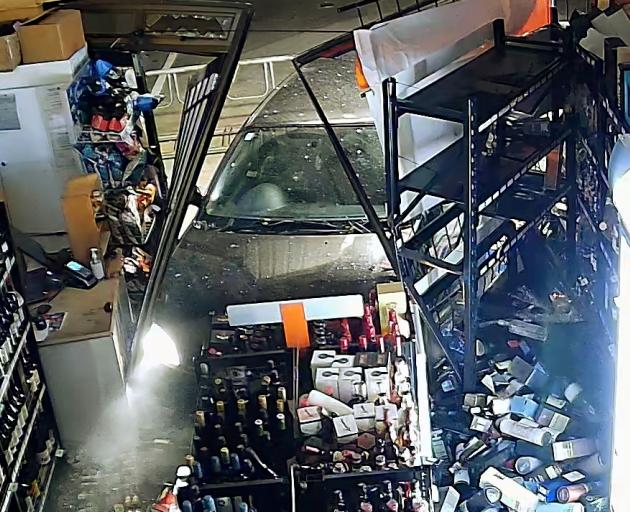 CCTV footage captured of the car ramming into the store, taking out a shelf of whiskey in the process. Photo: Supplied
A Christchurch liquor store owner is frustrated over the lack of progress police appear to be making into identifying the ram-raiders who caused an estimated $30,000-$40,000 in damage to his business.

Thirsty Liquor on Centaurus Rd, Huntsbury, was the target of a ram raid on April 27.

The offenders used a vehicle to smash through the front of the store but drove off empty handed when bakery staff next door ran out to investigate the noise.

Liquor store owner Gagan Deep said he would be trying to talk to police again this week to find out more about the investigation. He was told two weeks ago there was no update.

Police yesterday would not answer specific questions from The Star about whether the vehicle used in the raid had been found, or whether they had identified the suspects.

A police spokesperson would only say said the investigation is “ongoing” and no arrests have been made.

Brazen ram raids across New Zealand have accelerated in recent months, which has sparked debate over whether the justice system was tough enough on offenders, many of whom are young. 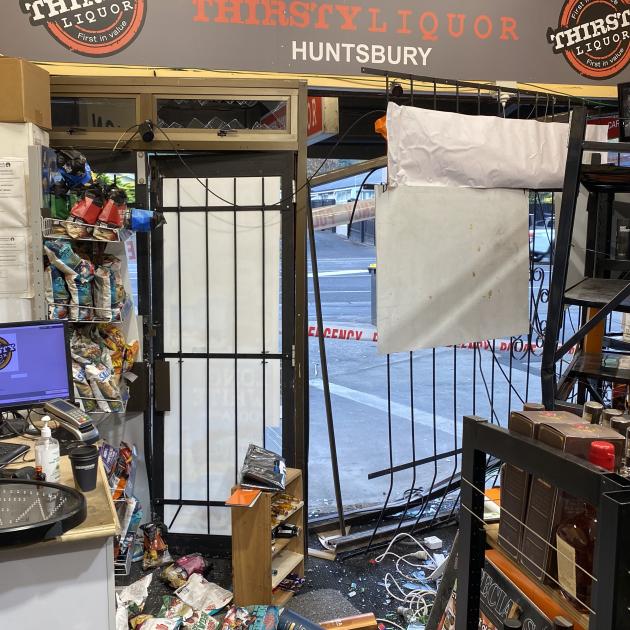 The car smashed through the front of the store, taking out a shelf of whiskey in the process. Photo: Mark Sinclair
Last week, ram raiders struck a dairy in Lincoln and a convenience store in Hornby and on Thursday morning a dairy in Prebbleton was targeted by burglars for the third time.

Deep said it was disappointing that there appeared to be no consequences for offenders carrying out ram raids.

“I’m frustrated with the system. In my eyes if they want to do big boy crimes that should equal a big boy punishment.”

Deep said if no one gets caught, the ram raids will continue happening, and questioned whether police were doing enough.

Deep said he was frustrated there have been no arrests, especially after providing CCTV footage to police of the offenders in the act.

“If they’re not getting anyone it must be a lack of something on their side. They must be busy or something, I don’t know,” he said.

“It’s happening every day and no one is getting caught. There’s cameras all over the place, there should be a way to catch them.

“At the moment they [ram raiders] are fearless, they are doing whatever they want, they’re hitting Hornby, Lincoln, Halswell, everywhere.

“They know no one’s going to catch them, it’s pretty annoying.”

Police had advised him after the raid to install bollards to deter ram-raiders, which his landlord covered the cost of.