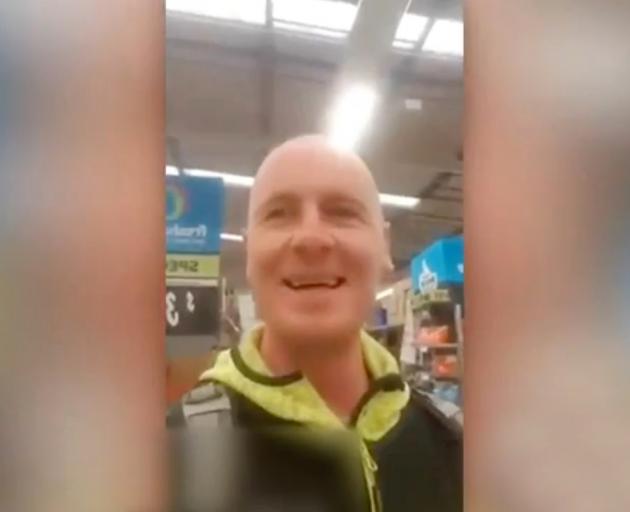 Photo: Facebook
A Christchurch man who filmed himself coughing on supermarket shoppers has tested negative for Covid-19.

Raymond Coombs, 38, has had his second video appearance in the Christchurch District Court this afternoon.

He was remanded in custody this morning until the results of his Covid-19 test, which came back negative, were in.

Coombs was facing charges of criminal nuisance and failing to follow a Medical Officer of Health's orders.

The criminal nuisance charge has been amended to one of offensive behaviour – and the other has been dropped.

Coombs has pleaded guilty to offensive behavior – and convicted.

Coombs sparked outrage over the weekend when he filmed himself coughing and sneezing on customers in the Barrington Fresh Choice – and posted it on Facebook.

Fresh Choice Barrington confirmed they reported the video to police.

Coombs told the court he wanted to apologise to the court and the community.

"It was a foolish insensitive act, and I regret it – I really do."

It was not the first time Coombs' attempt at a prank has got him in trouble. In 2009 he was sentenced to two years and three months imprisonment after pleading guilty for leaving dry-ice bottle bombs around Christchurch and injuring Brian Chambers when one of the bottles exploded.

Coombs' lawyer says he'd been watching prank videos on Youtube before he recorded the footage of himself – pretending to cough on fellow shoppers at the Barrington Fresh Choice.

She says the matter is a very serious one – and this wasn't an isolated incident.

McMeeken says on March 31 he uploaded a very serious video where he pretended he had the virus – and told viewers how awful it was.

"At the time you behaved in this appalling fashion you had no way of knowing whether you really had the virus.

"This is an unprecedented time in New Zealand's history… many people are suffering.

Your behavior would've added to that suffering.

"It's vitally important to our country we get out of lockdown as soon as possible. Your actions could've stopped that."

McMeeken has deferred sentencing until May 19 – and Coombs has been released on bail.

He's been ordered not to access the internet until then – apart from Facebook Messenger messages to family and friends.

But McMeeken says his family may not want to talk to him.