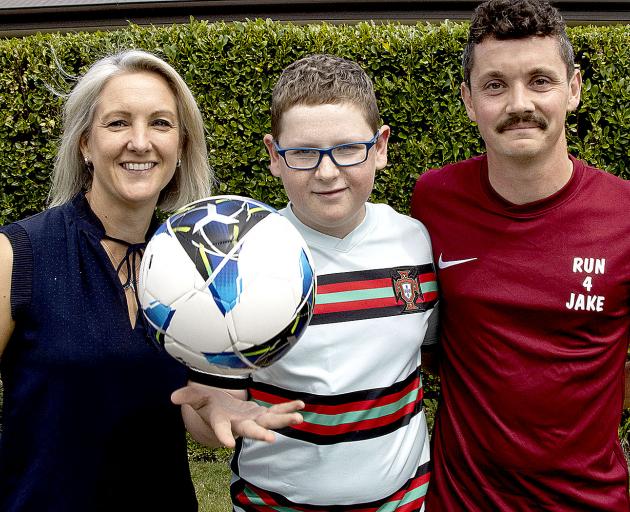 Sara Wilson, Jake and Isaac Malpass. Photo: Star News
Isaac Malpass has mapped out a pre-season with an added motivational factor, raising funds for a ball boy at his beloved Burwood AFC, a leukaemia sufferer he knows only in passing.

The first team fullback was inspired to help Jake Wilson and his family when news of the now 13-year-old’s second encounter with the disease emerged the same week Malpass was twice touched by cancer last July.

A club committee member, Malpass heard Jake’s remission had ended a day after a friend’s mum lost her 22-month battle with cancer.

“My point of view was I couldn’t, there wasn’t a lot I could do for my mate overseas or my friend’s family, but I thought ‘Jake’s still here with us’ and he’s just down the road so there’s something I can do for him,” Malpass said.

So the plumber/gasfitter is tackling the Port Hills Ultra on February 5, the 100km version, a physical and mental exercise which should also benefit the Tottenham Hotspur fan and keen cricketer for East Christchurch Shirley.

“I’ve met Jake, but just casually when we got introduced to the ball boys at a game,” Malpass said, before reacquainting with Jake on Wednesday.

“I heard his story and it resonated. It comes in threes (bad news), hopefully this can be different,” he said.

It is the second time Malpass has run over the Port Hills for personal development, and with a cause in mind. 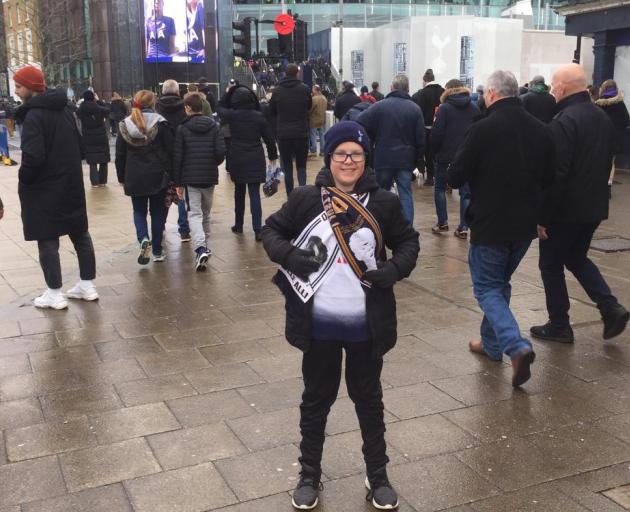 Jake Wilson on his way to watch Tottenham Hotspur play Brighton in the English Premier League on Boxing Day, 2019. Photo: Supplied
Aphasia is the inability, or impaired ability, to understand or produce speech as a result of brain damage, often following a stroke.

“My uncle had a stroke in 2015 and ended up with aphasia. You’re left a bit of a shell of who you were,” Malpass said.

“He was a bubbly guy, the life of the party and then if there was an event he’d just be sitting in the corner. He was stuck in his own mind. He ended up taking his life a year and a half later.

“Not many people have really heard about aphasia so it was about raising awareness. It’s not like a cancer where everyone knows someone, or has heard of someone.”

Jake’s mother Sara and dad Craig were grateful for Malpass’ gesture as their youngest boy negotiates another three-year treatment regime dominated by chemotherapy.

“It’s pretty awesome for him to hear about Jakey and do this,” Craig Wilson said.

Head of faculty at the New Zealand Institute of Sport in Christchurch, Craig said his students had already raised money for child cancer on the basis of Jake’s illness.

“This one is for Jakey to do something. He’s mad on cricket so a Boxing Day test, Lord’s . . .  it’ll be money towards a big trip at the end of treatment to say: ‘See ya cancer’.” 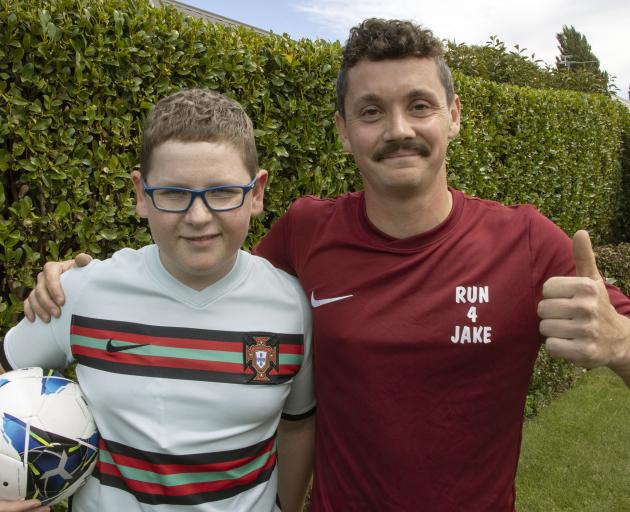 “We had a bit of a wobbly time around Christmas,” Sara Wilson said.

“Jake had a bit of a reaction to the medication and had a mini-stroke, but he’s got no long-lasting effects from that.

“He’s done most of the really hard bits. This week he’s getting chemo injected into his spine and a couple of different chemo’s on top of that.”

Fortunately the Burwood Wizards midfielder was home for Christmas Day and a subsequent hospital stay ended before he became a teenager on January 1.

Jake was first diagnosed with leukaemia as a six-year-old, with his parents and 15-year-old sibling, Noah, hoping he was clear until a relapse midway through 2021.

“Ironically it was coming up to the five-year mark of Jake first being diagnosed. That’s usually a really good indicator the treatment’s been successful,” Sara Wilson said.

“The oncologist showed us a graph of people who relapse, it had gone right down to hardly anything. A week or two after that Jake relapsed, so it was a bit of a kick in the guts.”

Jake started playing football when he was a four-year-old and loves playing for the junior grades at Burwood Park.

“The thing that gets to him most is not being able to play sport. If he had to go through everything but still play sport I think it’d be much easier,” Sara Wilson said.

He has had plenty of time to watch sport, with a trip to White Hart Lane the obvious highlight during a family vacation to the United Kingdom to see mum’s family in late 2019.