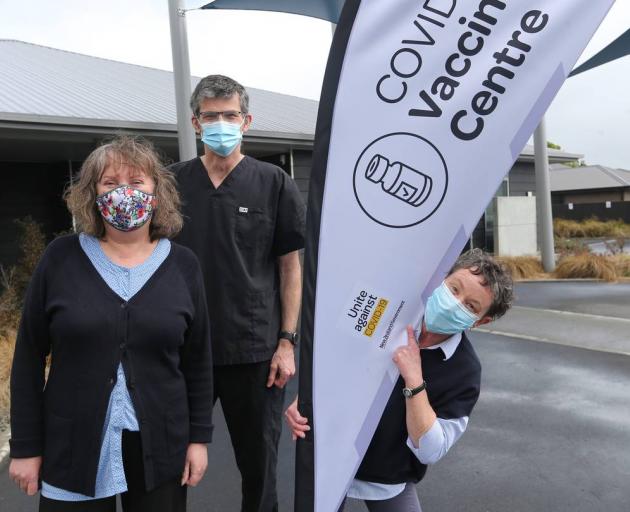 Gearing up for this weekend's Super Saturday vaccination event are (from left) Tracey Blower, Soni Heal and Malcolm Wootton. Photo: Adam Burns
Thousands throughout the South Island will be able to receive Covid jabs on Saturday as health leaders intensify the vaccine rollout.

Community leaders are pushing for as many people to get jabbed with up to 1500 doses available in the Ashburton district alone, in what is being dubbed Super Saturday.

A total of 10 spots throughout Mid Canterbury will be running vaccination clinics at various times across a 12 hour window.

Another eight clinics will also be run in the neighbouring Selwyn district.

Ashburton GP spokesman Malcolm Wootton said it was an enormous response from the local sector.

"We want as much of the community responding."

He said the preference was for the public to use the booking system but walk-ins would not be refused.

"If you walk in we will see you but there will be wait times."

"We need to encourage those who haven't yet been vaccinated to go and get their first dose," he said.

"We can see how the virus is spreading outside Auckland and we want people to be protected."

The Ashburton district has one of the worst vaccination rates in the country according to health leaders.

About 74 per cent of the 27,500 eligble residents had received a first jab with about 37 per cent fully vaccinated according to numbers provided by the Canterbury District Health Board last week.

Ashburton District Mayor Neil Brown pointed the finger at the Ministry of Health's "cumbersome" booking system but suggested there was a hint of complacency in the community.

"The Mid Canterbury response has been gearing up all along," Wooton said.

"There's a lot of hard work going on behind the scenes.

"We are bloody busy already and yet we recognise that this is so important."