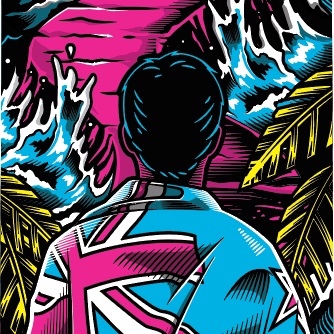 The skateboard deck design, by Ben Bartels, depicts an athlete’s journey to the Tokyo Olympics. Image: Supplied
People are being asked to come up with a name for a giant skateboard that will visit Canterbury in late May and June to promote the Tokyo Olympic Games.

Set to break records by entering the Guinness Book of World Records for the largest fully operational skateboard in the world, the board is a symbol of the changing face of the Olympics.

The New Zealand Olympic Committee is calling on Kiwis to get on board and show their support for the New Zealand team as they gear up for the Tokyo games by giving a name to a giant skateboard.

More than 200 athletes are expected to represent New Zealand at the games, which is set to run from July 23 to August 8.

People can enter their suggestion for a name through ‘The NZ Team’ Facebook or Instagram pages or at this site. Entries close on May 5.

The winner will receive a money-can’t-buy New Zealand team experience which includes being flown to Auckland on May 9 to attend a naming ceremony where Olympic gold medallist Barbara Kendall will announce the name. She will also present the winner with a replica of the skateboard featuring the winning name. 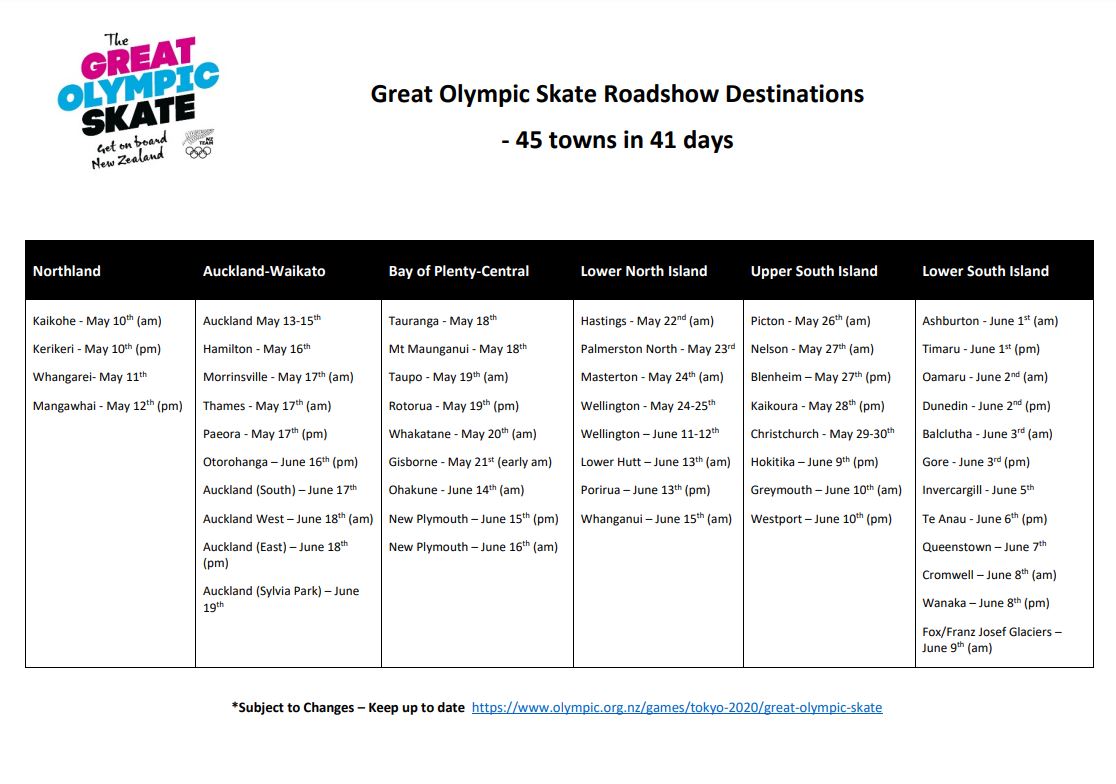 The Great Olympic Skate Roadshow schedule. Table: Olympic.org.nz
Four runners-up will receive a $200 voucher from Noel Leeming or The Warehouse.

She says the judges are looking for a uniquely New Zealand name – one that captures all the spirit, mana and pride of New Zealand.

“We’re looking for an inspiring name for the skateboard that gets Kiwis excited and makes them feel proud to be waving the New Zealand flag during the games.”

New Zealand Olympic Committee CEO Kereyn Smith said with no international spectators allowed at the Tokyo Olympics, it was more important than ever for our Olympians to feel support on their home turf by Kiwis naming and visiting the skateboard.

“We can’t wait to see the names that come in for this very special skateboard that carries the hopes of our Kiwi athletes. During the Great Olympic Skate Roadshow, Kiwis will have the opportunity to meet the skateboard and have some fun by getting involved in some of the new sports on show.” 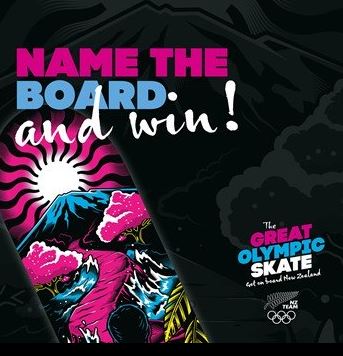 Image: Supplied
Following the roadshow, the skateboard will be a centrepiece at the new New Zealand Team HQ Fan Zone where Kiwis can gather together to celebrate the games, connect with the team live in Tokyo and show their support.

It depicts a New Zealand athlete’s journey, both physically and emotionally from humble beginnings in New Zealand to the world stage in Tokyo.

The athlete rising from the cloud depicts the long white cloud, with the flag symbolising the support of the nation. The road is windy with stormy seas signifying the tough road ahead. Tokyo is symbolised with cherry blossoms, Mt Fuji and an iconic sun rise.