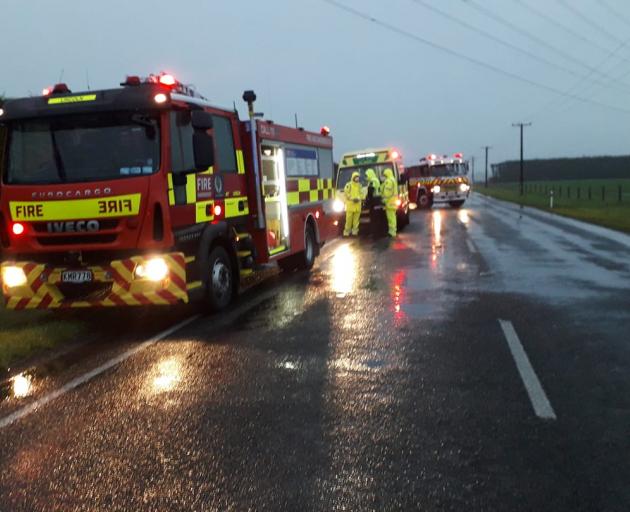 Lincoln firefighters and St John personnel assisted a trapped truck driver on Springs Rd. Photo: Supplied
A truck driver trapped in his crushed cab at Lincoln was lucky to walk out with only minor injuries, firefighters say.

Lincoln Volunteer Fire Brigade members cut the driver, believed to be in his 20s, from the cab.

The driver’s refrigerated milk delivery vehicle had gone off the side of Springs Rd while travelling towards Christchurch about 5am on Thursday.

The vehicle had crashed into a low ditch and large hedge.

Deputy chief Roger McLenaghen said it appeared the hedge had cushioned the impact.

St John treated the driver at the scene for a minor injury.

“It was still enough force to crush the cab back onto him,” McLenaghen said.

The man’s right foot was trapped, preventing him from getting out of the vehicle on his own, and the steering wheel was touching against his abdomen.

Firefighters spent about 15 minutes cutting the hedge away so they could gain access.

They were then able to cut into the a pillar of the cab, so they could pull the front off, and remove part of the steering wheel, enabling the man to climb out the passenger door and be seen by waiting paramedics.

“I think he was still a bit shocked, he was quite happy to be out,” McLenaghen said.