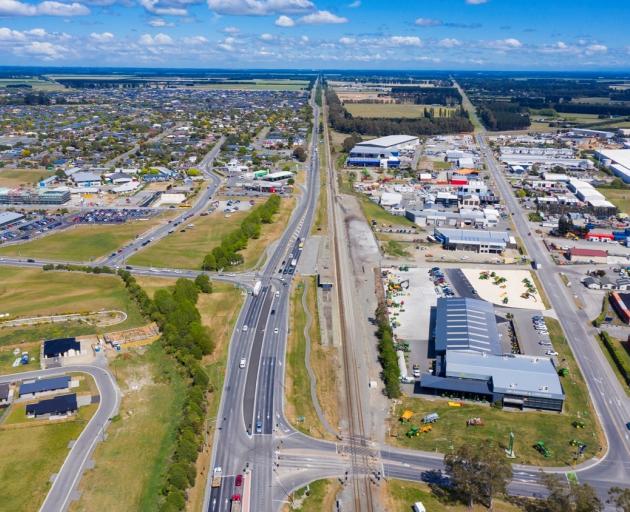 The proposed flyover will connect residential Rolleston (left of State Highway 1) with the industrial area, bridging across the highway from Rolleston Drive North to Jones Rd north of the Hoskyns Rd intersection. Photo: NZTA
Many Rolleston residents want the town’s proposed flyover shifted to a different area of the highway.

It is proposed that the flyover bridge across State Highway 1 would connect residential Rolleston, from Rolleston Drive North, with the industrial hub, at Jones Rd north of the Hoskyns Rd intersection.

However, newly collated feedback shows many believe the bridge needs to be relocated.

Suggested areas include some distance down the highway, at Rolleston Drive South or Tennyson St, while another suggestion is it be part of the highway, rather than go across it.

The roading authority last week released the feedback in a community engagement report, summarising responses from consultation undertaken in July and August.

Concerns from residents highlighted the key challenges the design team was now working through, the report said.

These concerns included that State Highway 1 should remain open at multiple points at Rolleston and the connection to Jones Rd should remain for southbound traffic.

Jones Rd businesses have opposed the current plan as it reduces accessibility from the highway.

West Rolleston Primary School has opposed it, concerned about increased traffic resulting from making Dunns Crossing Rd a southern entrance into the town.

The district council has also rung alarm bells, saying it gives rise to new safety concerns, disadvantages businesses and does not support growth and prosperity.

"Along with community feedback, we are taking time to closely examine again whether we have tested and exhausted all the options available to us. This is the value community engagement brings to the planning process and the project,” a Waka Kotahi spokesperson said upon release of the report.

The next step is offering the community a second opportunity for feedback, expected in the first half of 2022.

Waka Kotahi is delivering the project as part of the New Zealand Upgrade Programme, an $8.7 billion investment by Government in growing communities across the country.