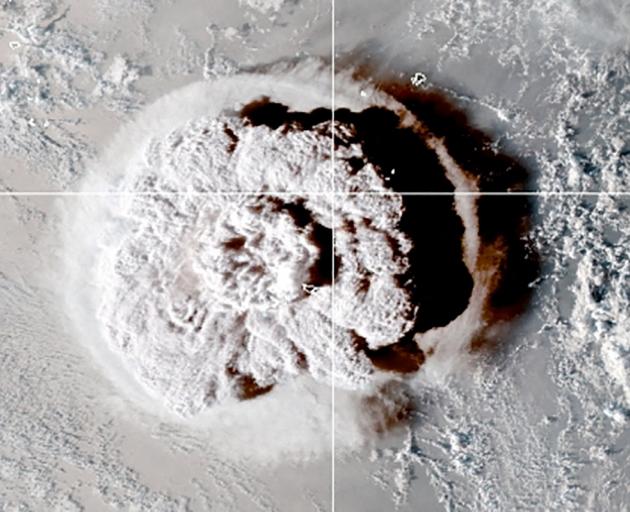 The eruption of an underwater volcano off Tonga, which triggered a tsunami warning. Photo: CIRA/NOAA/Handout via REUTERS
Early data from Tonga's violent volcanic eruption suggests it is the biggest blast since Mount Pinatubo in the Philippines 30 years ago, volcanologist Shane Cronin says.

The eruption of the underwater Hunga Tonga-Hunga Haʻapai volcano, about 65km north of Nuku'alofa, on Saturday shot thick ash and steam 20km skywards.

University of Auckland volcanologist Professor Shane Cronin said scenes on the ground would have appeared apocalyptic after the eruption: ash clouds blotting out the sun, thunderclaps of booming shockwaves and thousands of lightening strikes.

"The clouds that people could see in the distance, the booming noises and then the waves coming from the first tsunami...The next step is when the ash clouds spread across Tongatapu, and that ash cloud is so dense with fine ash particles that it blocks the sun completely, so it gets really dark."

Cronin said rain, small pebbles and many centimetres of ash would have rained down.

"This is an eruption best witnessed from space," he said.

The ash clouds ballooned over the island after the eruption, forming an umbrella with a diameter of 260km.

"The large and explosive lateral spread of the eruption suggests that it was probably the biggest one since about the 1991 eruption of Pinatubo," Cronin said.

He said early data suggested the eruption could measure as high as five on the volcanic explosivity index (VEI).

The index estimates the strength and potential impact of an eruption on an eight-point scale, with each successive interval representing a tenfold increase in energy.

Cronin said a VEI-5 eruption would happen once or twice in a decade. 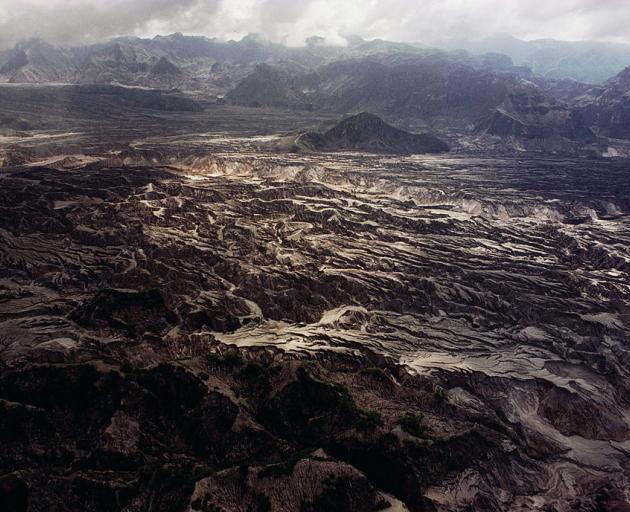 Aftermath of Mount Pinatubo volcanic eruption Philippines, Parulog village. Volcanologist Shane Cronin says signs point to the massive Tonga eruption being the largest since Pinatubo. Photo: Getty Images
The Mount Pinatubo eruption, which had a VEI of six, pumped 15m tonnes of sulfur dioxide into the atmosphere and cooled the earth by one degree for the next year and a half.

Cronin said Tonga's water supply and agriculture could be severely affected in the fallout from the eruption and international aid will be critical.

Cronin said as well as being a health hazard, volcanic ash could produce acid rain and leachates which can destroy crops.

"The acid associated with the volcanic ash can burn the leaves of crops, leafy vegetables, things like that.

"It's pretty bad for a lot of crops, particularly broadleaf crops - bananas and squash, things like that.

"Acid rain can cause the burning of plant leaves and so on, as well."

He said drinking ash-contaminated water could cause an upset stomach and health issues.

Most tsunamis are triggered by underwater earthquakes, and only about 5% of historical tsunamis have been caused by volcanic eruptions, she said.

"We haven't seen a volcanic tsunami of this magnitude in over 100 years," she said.

"This is pretty much shattering the mould. One of the tricky things about tsunamis is that they happen very infrequently; think about the Japanese tsunami and its predecessor was over 1000 years beforehand.

Lane said the only similar volcanic tsunami event was Indonesia's Krakatau eruption in 1883, which killed tens of thousands of people and obliterated the island.

Atmosphere pressure disturbances from the volcano saw sea level disturbances recorded across the Pacific afterwards, including in New Zealand, where tsunami waves higher than one metre above sea level were recorded in areas including Warkworth and the upper reaches of Waitemata harbour.

"Tsunami scientists are literally going, 'Wow', about this," Lane said.