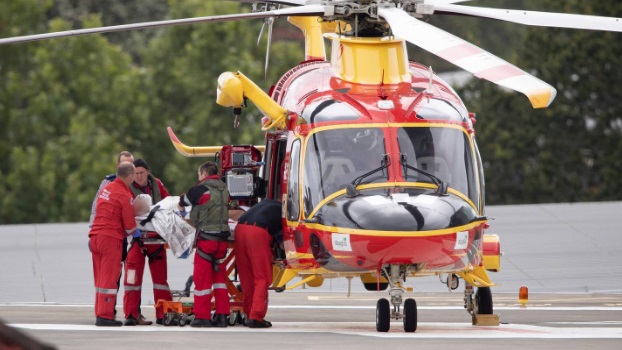 A rescue helicopter arrives at Auckland Hospital with a man who was shot by police yesterday. Photo: NZ Herald
A man shot by police remains in a stable condition today - as does the hero police dog that was also wounded in the incident.

Police investigating yesterday's shooting near Tangowahine, in Northland, say the man is in a stable condition at Auckland City Hospital.

"At this stage, charges have not yet been laid in relation to yesterday's incident," Northland district commander superintendent Tony Hill said.

Police are, however, considering charges against him, he said.

The police dog that was allegedly shot by the man now in hospital is also said to be in a stable condition today. The animal sustained critical injuries to its jaw.

"Police would like to acknowledge the messages of support received overnight from the community around the welfare of the police dog who was shot yesterday," Hill said.

Police dog not to be named

Police will not be releasing the dog's name publicly at this stage, for privacy reasons.

Hill acknowledged that was due to the ongoing investigation now being carried out by officers.

Authorities are continuing to support police staff who were involved in yesterday's incident.

Support is also being given to the family of the man in hospital.