On a mission to support the vulnerable 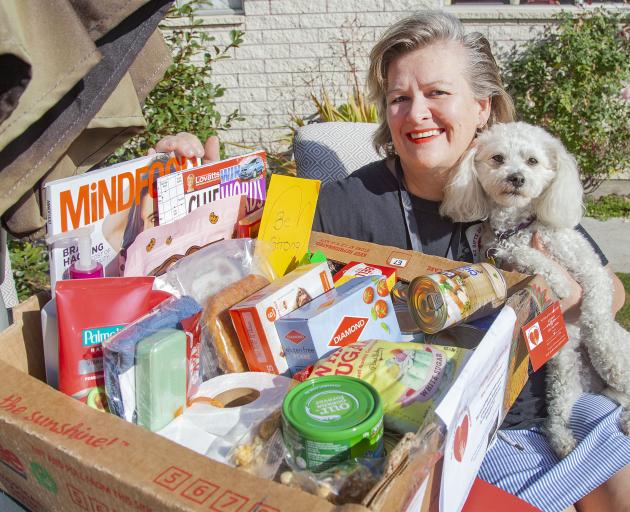 Vicki-Anne Parker shares a birthday with her dog Chloe, and is regularly accompanied by the pooch while delivering care packages to vulnerable families. Photo: Geoff Sloan
Vicki-Anne Parker's love of community service and giving back inspired her to start the NZ Gifts of Love and Strength charity.

Why did you create NZ Gifts of Love and Strength?
Back in 2010 and 2011 I lived in Avondale – the red zone. I was volunteering and distributing donations to the vulnerable and I knew the difference a small gift could make after a disaster. I lost my house in the earthquakes and it will always stick in my mind when I received a knitted red and black scarf from a lady in Auckland. I wanted to find a way to pay back for everything my suburb received during those horrendous times. And then on March 16 after the mosque attacks, the charity was created to provide donated food, clothing, toys and other items for victims and their families.

What kind of support does the charity provide?
We supply either a treat package or an essential package of food, toys, books, magazines – that sort of thing, for victims of new and severe traumatic events and disasters. Our Covid-19 response has included that, as well as delivering groceries, handmade cards or items to vulnerable groups and assisting the Student Volunteer Army with their recruitment process. We also handshake with other organisations and point others in the right direction for their needs, like where they can get community meals, where a food pantry is or what would be an appropriate grant for them. It raises awareness about post-traumatic stress disorder because sometimes it can be hard to even get out of bed to make a shopping list.

What has been the most rewarding experience for you, and why?
They have all been rewarding, such as supporting families who lost their houses due to a fire and providing food and activities for 100 children at South New Brighton School when their classrooms caught fire. But one instance that still brings tears to my eyes was when we were delivering meals to the hospital during the mosque attacks and we got to know one of the victims and his family very well. Sadly, he was one of the last to perish in ICU. His elderly parents arrived from Turkey with nothing but the clothes they were wearing, so I managed to get some warm jackets and clothing for them. The father did not speak English but he later handed me a bottle of water, I did not need it but his wife’s brother said I needed to accept it as payment for the clothes. Every day I visited the hospital since then, he’d walk me out to the lifts and his wife would re-tie my headscarf. It  was just beautiful, so it was  really hard when their son passed away.

Favourite thing about living here?
There’s just so much on offer living here in Christchurch. You can go skiing and within a couple of hours, you could be walking along the beach or having a wine at one of the vineyards. We have so much on our doorstep, but being a Cantabrian, we’ve learnt to be resilient. Everything from snowstorms, earthquakes, the Port Hills fire and the mosque attacks – it has not stopped our resilience. Compassion and kindness are paramount in Canterbury; we will always stand up to help another individual because we’ve become stronger and have adapted to help those struggling through hard times.

What have you had to overcome in your own life?
I have Lyme disease, it’s a horrific disease that is carried by ticks or other insects and once you’re bitten, the infection attacks your immune system. I hunted for close to 28 years to find the reason why I was so sick – why I was having migraines, losing so much weight, losing my teeth or why I was always in the hospital. I can’t have children because of the disease, which broke down my previous marriage. It made my own PTSD from prior trauma worse as it affects the brain, causing nightmares. But I have learnt how to focus on something else that brings me joy, like the charity. I am also the founder of the New Zealand Lyme disease support group, and because May is the global Lyme awareness month, I’ll be stepping up and speaking about that at some point.

Can you tell me a little bit about your family?
Currently, I live alone with my little dog, a bichon-poodle named Chloe – she actually has the same birthday as me. In the morning we start with her birthday, opening her presents, then at lunchtime it springs over to mum’s birthday. But my family live all over the place, my brother lives in Rolleston, my mum lives in Christchurch, my adoptive father is in the North Island and my birth father lives in Australia. It’s actually an interesting story, for years I didn’t know who my birth father was, my mum wouldn’t tell me. I knew he worked in the mental health sector in Melbourne and after putting lots of pieces together I found his email address and sent him a message in 2010. I had nothing to lose by sending an email asking if there was a chance that he was my birth father. He actually replied and said: “I’ve wondered where you have been for the past 40 years.” We ended up taking a DNA test and it was a 99.9 per cent accurate. Since then we’ve kept in contact regularly and I’ve been able to meet him a few times when he came to New Zealand. When I moved to NZ as a baby, I was adopted by my dad when he married my mum and has been my father all of my life. I’ve been very lucky with the two dads that I have had.

Any hobbies or interests outside of your charity work?
Definitely my dog – I love my dog, I would be lost without her as she keeps me sane and grounded. But my charity is my life, I do not have much outside it and I am happy about that. I enjoy meeting, communicating and connecting with people. For me, I love helping others and if I find someone who is struggling and I can reach out, that gives me immense joy. Also, I used to hate it in the beginning, but I enjoy being in my garden. I think of my nana who’s no longer with us every time I prune my roses, I think she would be so proud of me.