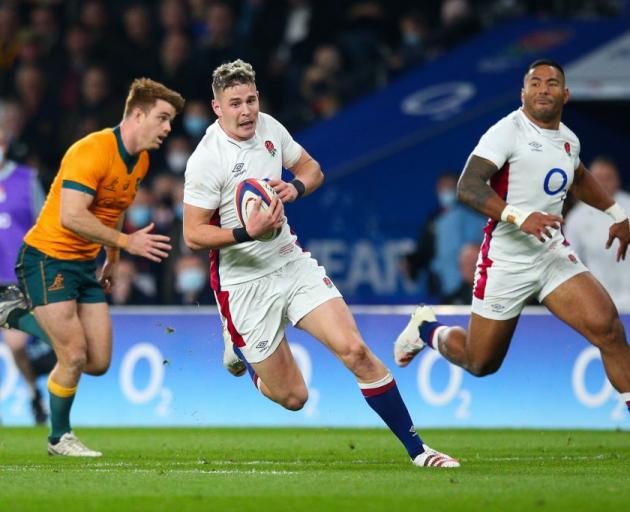 Freddie Steward makes a break to score his sides first try during the Autumn Nations Series match between England and Australia. Phott: Getty Images
England chalked up an eighth successive victory over Australia on Saturday as tries for Freddie Steward and the unexpectedly prolific Jamie Blamire, together with pinpoint goalkicking by Owen Farrell and Marcus Smith settled a penalty-ridden game 32-15 for the hosts.

England scored a superb try through fullback Steward after seven minutes but as both teams conceded a string of penalties, Farrell and James O’Connor punished each other from the tee to keep it tight at 16-12 at halftime.

The ragged, indisciplined nature continued in the second half – Australia were hit with two yellow cards in the game - with neither side really threatening the tryline but England still in the ascendancy.

Farrell, winning his 100th cap for England and the Lions, went off injured after landing five penalties and a conversion. But Smith added another penalty to stretch the lead before replacement hooker Blamire sent the home fans wild when he galloped in from 60 metres in the final minute.

England have now won all eight of their games against the Wallabies, who conceded 18 penalties, since losing to them in the pool phase to be knocked out of the 2015 World Cup.

"We stuck at it," said coach Eddie Jones. "We had a lot of setbacks and a tough week and had to battle really hard today. I was really pleased with the attitude.

"We predicted a more free-flowing game but it was a penalty-heavy game and I was pleased with how we adapted and how well our finishers finished the game."

Asked why England lost their way in the second half, Jones said: "Penalties in possession tend to disrupt the flow of your attack - there was no lack of intent."

Saturday's game certainly won't be the most memorable of encounters for many of the fans. But for fullback Steward, who nabbed his first international try, it will never be forgotten.

"It's an incredible experience. Running out in front of 80,000 here, it's the stuff of dreams," he said after being named man of the match. "Marcus (Smith) was brilliant, he put me through the gap, I dived over and it was just elation."

That try came after seven minutes when Smith slipped a well-disguised inside pass to Steward, who then left Kurtley Beale clutching air with a killer step.

England had most of the attacking initiative but failed to cash in on some good opportunities as Farrell and O'Connor popped over a succession of straightforward three-pointers.

Australia wing Tom Wright was sin-binned for a high shoulder hit on a rampaging Jamie George after 30 minutes but England failed to make their numerical advantage pay as another penalty each made it 16-12 at halftime.

O’Connor’s fifth immediately after the restart briefly closed the Wallabies to within a point but a second yellow for prop Angus Bell gave Farrell three more points.

Again though England failed to press it home before his return as the emptying of both benches took the momentum out of the clash.

With Farrell off injured, Smith added a further penalty to make the game effectively safe and the home crowd got the lift they desperately wanted when Sam Simmonds broke up a final Australian attack in his own 22 and fed Blamire to trundle home.

The man who barely gets a start at Newcastle has now scored a remarkable six tries in his four test appearances.

After thumping Tonga last week, England complete their autumn campaign against South Africa while Australia, beaten by Scotland and struggling to overcome some big-name absences, play Wales desperate to avoid a hat-trick of defeats.

"We got hammered in the penalty count. We just made too many errors, dumb penalties that put us under pressure," their coach Dave Rennie said.

"It was frustrating. There was a lot of character and at 16-12 we fought hard. If we’d strung a little more phase play together... but you’ve got to be disciplined and you’ve got to be accurate - we were neither tonight."