Scott Robertson set to coach Barbarians against All Blacks team 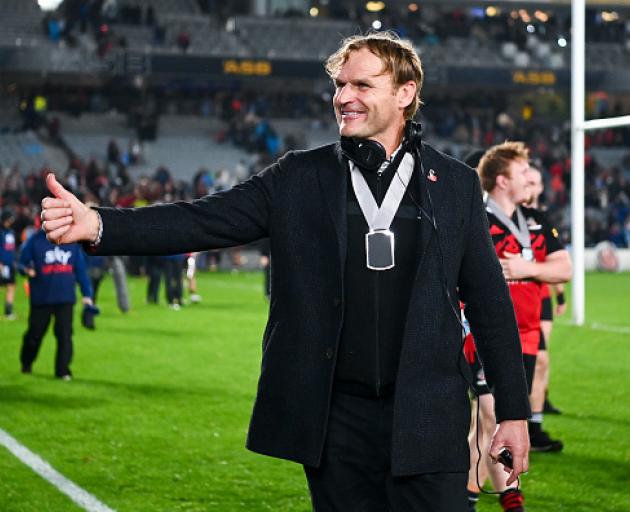 The Barbarians are set to benefit from Scott Robertson's incredible coaching success over the past six years. Photo: Getty Images
Crusaders coach Scott Robertson has been named as the coach of the Barbarians team set to face off against an All Blacks XV in November.

The decision to appoint Robertson to the role, as a co-coach alongside Ireland and Munster legend Ronan O'Gara, comes amidst speculation that he could be in the running to replace an under-pressure Ian Foster as the man in charge of the All Blacks.

The All Blacks XV, formerly known as the Junior All Blacks, is yet to announce a head coach but it's unlikely to be Foster himself, given Robertson was offered that role in 2020 and turned it down.

However, the fact Robertson has set himself up to do battle against a New Zealand representative team in the coming months is intriguing timing since it would appear to make any appointment to the All Blacks coaching team unlikely - though not impossible, given it is a co-coaching role.

Robertson himself is overjoyed with the chance to coach what is an iconic UK team.

"Rugby throws you great opportunities and coaching the Baa-baas has to be one of the best there is," he told the Barbarians' official website. "I am proud to help the incredible club and add to its history."

The match will take place at Tottenham Hotspur Stadium in London in what will be the first International rugby union match at the ground and is part of a three-week global tour for the All Blacks XV; playing in North America, the UK and Europe.

The side will play Canada on October 29 with two other fixtures to be confirmed against a national team from a developing rugby nation and a second XV team from a Tier 1 rugby nation.

Scott Robertson enters the match in red-hot form, having guided the Crusaders to their sixth title in as many years after the team beat the Blues 21-7 in the inaugural Super Rugby Pacific final at Eden Park in June.