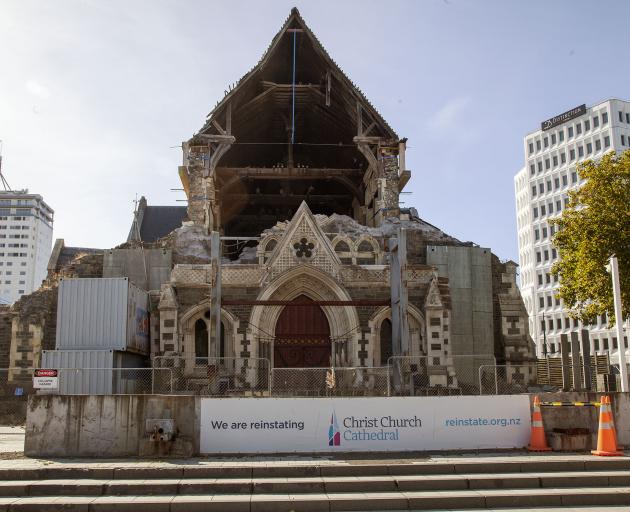 But additional enhancements to bring the cathedral's facilities up to higher standards than they were before the 2011 earthquake are needed and will increase the cost.

The exact cost of the restoration is not yet known but will be at the end of this year.

Said a Christ Church Cathedral Reinstatement Project spokeswoman: "We can confirm that the project will cost more than the $104 million estimate.

"We are not just putting back everything as it was.

"The reinstated cathedral will look very similar to the pre-quake cathedral, but most importantly [be] stronger, with base isolation, offering greater comfort, and the ability to use the space more flexibly for both spiritual and civic functions.

"The cathedral, tower and spire will look much the same as they did pre-quake. The tower will have a lift and stairs, compliant with current standards. The materials for the spire will be determined as part of a later design stage," she said.

The project has about $100 million in funding from grants and pledges, including from Christchurch City Council and the Government.

Part of the cost of the restoration will be covered by donors from across the world but the Covid-19 pandemic has caused fundraising to drop. One donor has pulled out as a result.

"We are conscious that many New Zealanders and people abroad are financially impacted by Covid-19 and our thoughts are with them. We are working with key supporters to help ensure we navigate through this period with sensitivity and pragmatism," said the spokeswoman.

The fundraising campaign is in its first phase, with efforts focusing on building relationships with those who will donate potentially large amounts.

Said the spokeswoman: "Then comes the public phase of the campaign where fundraising becomes very visible and the community is actively involved. We aim to move to the public phase next year."

The current $11.8 million construction phase is under way and involves stabilising the building. It will take up to two years and is fully funded.

The next phase is strengthening and reinstatement and funding for this will need to be in place by late 2021.

The next milestones for fundraising are in mid-2022 for the ancillary buildings and mid-2023 for the tower.