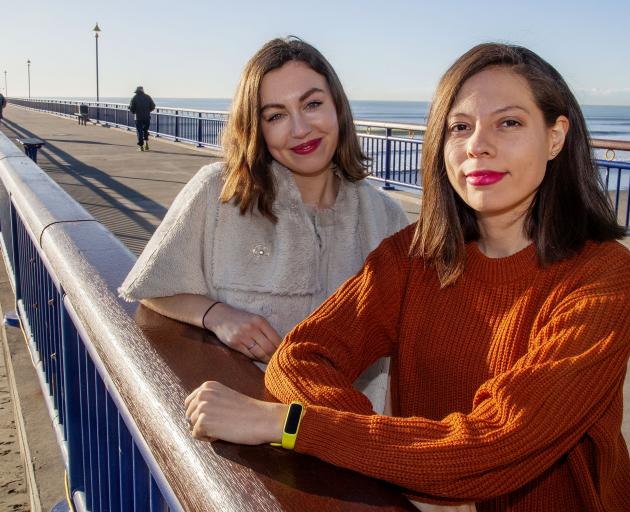 A film showcasing New Brighton’s beauty and resilience by Claudia Stewart (left) and Tabitha Palacios is in the running for a people’s choice award at an international film competition. Photo: Geoff Sloan
Two Christchurch creatives have joined forces to showcase the best of New Brighton on the world stage.

We got the Sunshine, a film by Claudia Stewart and Tabitha Palacios, is in the running for a people’s choice award at global film competition, Musicbed Reopen Challenge.

Filmmakers were challenged to share their stories and hopes for the future, shedding light on “reopening” the world after Covid-19 in a better place than what it was before, especially with cultural and economic changes to come.

“When you join a neighbourhood like New Brighton, it’s more than buying a house. You’re joining a community of people that will support you and that helps each other do life together," said Stewart, who lives in Opawa.

“Early on we knew New Brighton would be great visually, but also the deeper messages of hope, community, creativity and supporting local were exceptionally demonstrated by the community.”

She said they chose the suburb due to the beauty of its beachside nature, focusing on its rich heritage and history of community and resilience, especially after the February 22, 2011, earthquake and now Covid-19.

With everything that the community had gone through, the beach was the one thing that remained a constant, bringing people together through its beauty.

“We believe our greatest asset is our people, and community initiatives such as the Food Pantry and Blanket Bank are a great example of how sharing resources can fill those financial gaps some may face,” she said.

The project was filmed and edited in about three weeks after the nationwide lockdown was lifted.

“During the lockdown it did get lonely for some, and we realised that we should be out there connecting with our neighbours, sharing ideas and nurturing those relationships,” said Stewart.

“It’s important to connect with people who have common interests to share ideas or even to start a business. Together we can get through this and make up for what we have lost.”