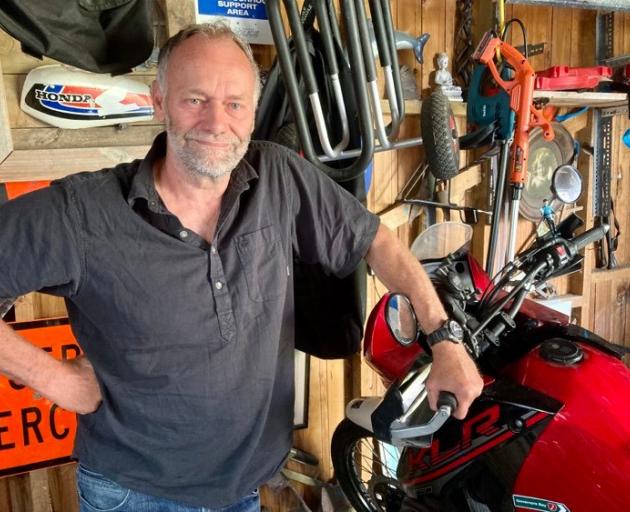 George Lockyer downplays his own garage after travelling throughout the country to document others. Photo: Chris Barclay
George Lockyer seems surprised to be asked to leave the kitchen and wander down the brick pathway to his garage, which the part-time author admits, is nothing to write home about.

And the Londoner is well-placed to downplay the appeal of the building at the foot of his Governors Bay property, a standard structure that houses the usual conglomeration of tools, gym equipment and machinery, including two motorbikes.

After all, the 62-year-old has travelled the length and breadth of New Zealand, often on his Kawasaki, to document some of the country’s most eclectic garages for his fifth book: Kiwi Garages - Inside New Zealanders’ happy places.

A brickie and stonemason by trade, Lockyer grew up in a two-up two-down Borough of Hounslow council estate in Isleworth, so garaging was a foreign concept until he moved to Newtown in Sydney’s inner west in 1988. It still took another dozen years until he had one at his disposal.

Back home, garages were reserved for the privileged – those up the Twickenham Rd in leafy, well-heeled Richmond.

“You walk from the council estate in Isleworth into Richmond and suddenly you’re in a different world. I didn’t know anyone who had a garage.”

He certainly does now. 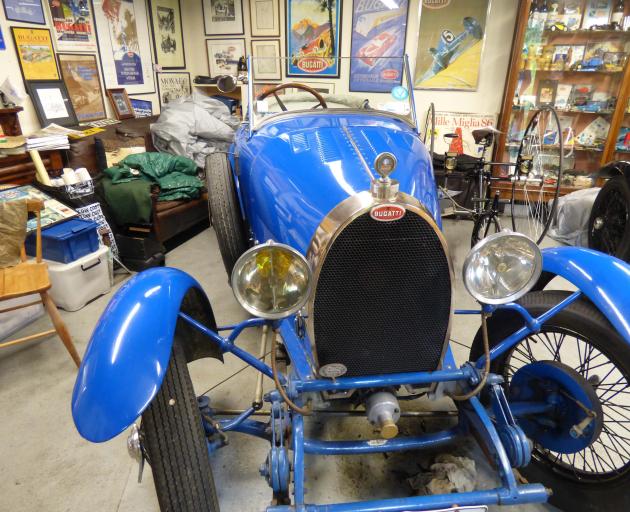 The avid motorcyclist relied on friends, mates of a mate and internet search engines to source material for 28 chapters, including images.

‘Red Fox’ was an anomaly among the interviewees; she was the only one who requested her details stay under wraps, other than to reveal the “unassuming” garage/dungeon is at the top of the South Island. 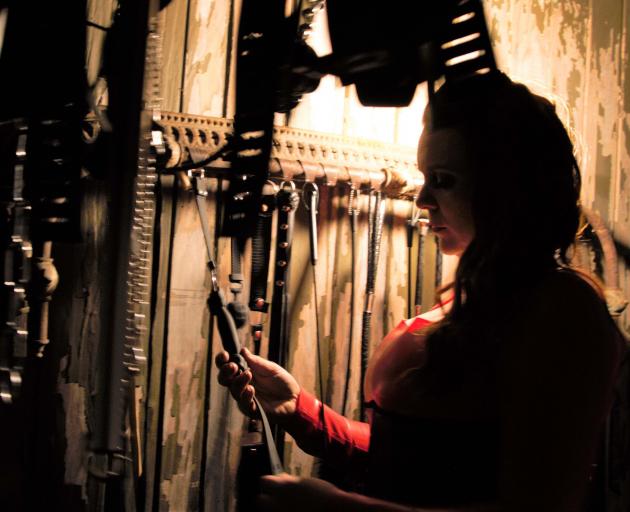 “It was a relation-of-a-relation, of a friend-of-a-friend, she made all these phone calls and put me in contact with her,” Lockyer said cryptically.

“I texted her, she sent me her email address and she was all for it.”

Each chapter was vetted by the subject, mainly for security reasons as the collections are not just valuable from a personal perspective.

“There’s a very expensive bottle collection, you wouldn’t believe some of them are so expensive, some of them are 20 grand each. I said to the guy (who was reticent about his location being publicised) ‘How about I just put you live in rural Canterbury?’ I always ask about names as well,” Lockyer said. 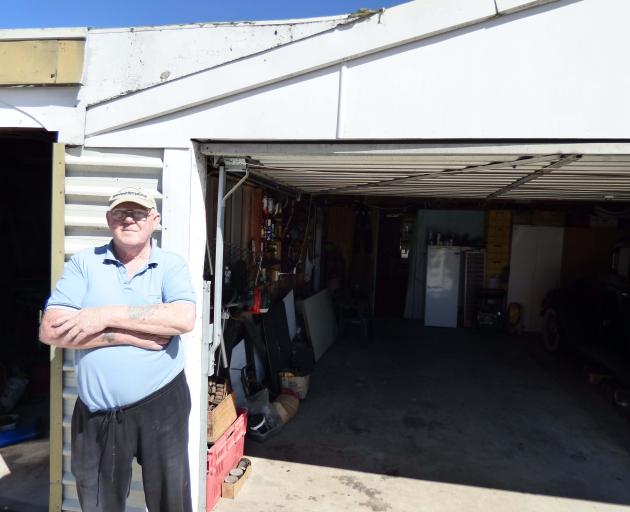 Dennis Gooch has more than 2500 spark plugs in his collection. Photo: George Lockyer
One name stood out for Lockyer: Raoul Lealand, the ‘mad’ inventor from Taupo.

“He was just fascinating, he’s a genius really, the stuff he made in his garage . . . everything he made was from junk, just rubbish, he made three steampunk motorcycles and they all go. It was unbelievable, the talent of that guy.

“Right at the end he showed me his electric chair. He put the crown on, started pedalling and he said it puts 30,000 volts through you (at a low amperage). He said school-kids love to have a go.”

A fellow motorcyclist helped link Lockyer up with Lealand. Google was another useful ally.

“I found vintage car clubs, doll clubs, sculptors, there’s pages for artists. There’s always a president of this or that so I email them,” he said.

While that tactic worked to track down David Smith’s radio room in Havelock North, the model railways community weren’t exactly on the same wavelength.

“The train collectors were very cagey. I did speak to a few clubs, they said ‘We’ll put it out on our newsletter but don’t expect any response because our guys are very secretive’. They were right.”

The surprises were not limited to Red Fox’s paraphernalia or the shock factor to Lealand’s minimally powered contraption. 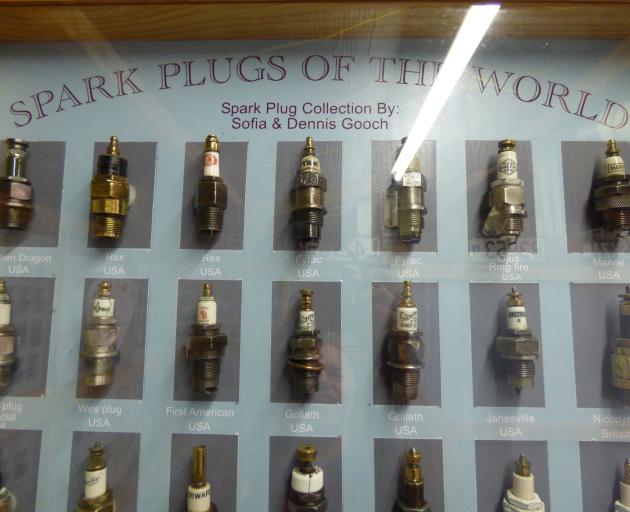 “It was amazing because a) why? and b) you had no idea about the complexity of spark plugs, how many there are. Every one had a story. He’d pick one up and say ‘This is from the first Mercedes Benz’,” Lockyer said.

He was mindful of including women in the collection, though it was a challenge, prompting a disclaimer in his introduction.

“I have tried to include as many women as possible in this project, but the fact is garages seem to be, for the most part, the domain of a male,” he wrote.

Other than ‘Red Fox’, Nelson sculptor Fiona Sutherland and potter Many Garguilo provide the female perspective. 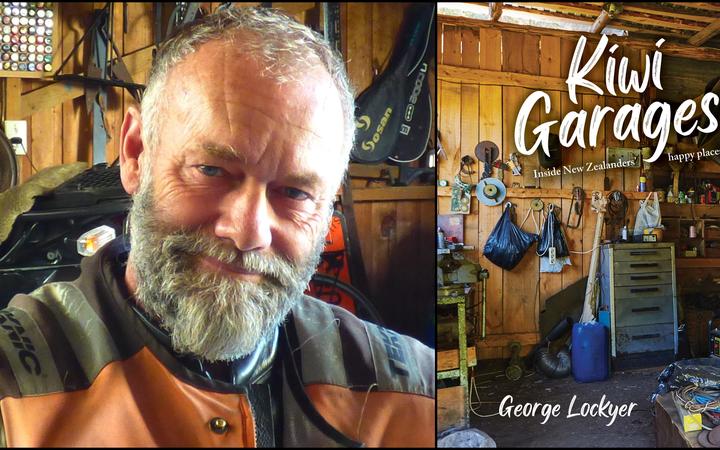 George Lockyer and the cover of his new book. Photos: RNZ / Supplied
There was another touchy subject for Lockyer to explore: What happens to these collections when the owners pass on?

“I like to think I establish a bit of a rapport after an hour of talking. At the end you’d say ‘What happens when you pop your clogs?’

“I think most of them have sons who want to carry it on. It’s 50:50 probably. Half of them, their sons and daughters will inherit it and they’re keen to maintain it, the other half are just going to flog it.

“With some of them, you just get that vibe that you’re a bit too personal by asking that question.”