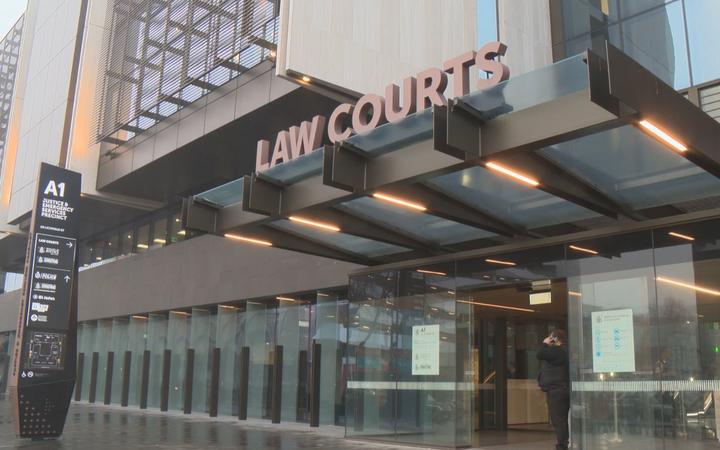 Eighteen overseas news organisations plan to cover the sentencing of Brenton Tarrant in the High Court in Christchurch later this month. Photo: RNZ
A senior journalism lecturer is urging the foreign media to respect strict reporting restrictions for the sentencing of the gunman who carried out the Christchurch mosques' attacks.

Brenton Tarrant will be sentenced in the High Court in Christchurch beginning on Monday, 24 August.

In March this year the 29-year-old Australian admitted he was the lone gunman who murdered 51 Muslims at two Christchurch mosques on March 15, 2019.

As well pleading guilty to 51 murder charges, he also admitted 40 charges of attempted murder relating to the attacks at Masjid Al Noor and Linwood Islamic Centre and pleaded guilty to one charge of engaging in a terrorist act laid under the Terrorism Suppression Act 2002.

Eighteen overseas and 11 New Zealand news organisations plan to cover the sentencing which cannot be reported live, and only under daily embargoes.

Justice Cameron Mander notified media this week that live reporting of the sentencing hearing was banned with coverage of the hearing embargoed until the midday and end-of-day adjournments during what was set down to be a multi-day hearing.

"On the surface this looks like a strong hamstringing of the media. It reality...it is censorship but it's necessary censorship.

"We're in an unprecedented era here and we've seen overseas how mass shootings have been an epidemic and someone has to do something to stop it and this is one step. It's unprecedented but it may need to be done."

During the Grace Millane murder trial several British publications named her killer, despite a suppression order.

Dr Strong said it remained a concern, particularly because of the speed in which news was distributed online, but she hoped methods by which reporters could cover the sentencing remotely might prevent rule breaches.

The court had made provision for overseas media and victims and their families who could not enter New Zealand due to the Covid-19 pandemic to view the hearing remotely.

However, they must agree to the reporting restrictions and additionally to not copy or capture the digital stream in any form.

"My real worry is the overseas media and I urge them not to be crass, and respect that we're trying to forge a new step in trying to cull mass shootings, because we know that it becomes what's known as 'dark fame' - some people, that's what they want even after they die - they want to be known for being a mass shooter and worse than anyone else."

Dr Strong assumed overseas reporters would have to register with the court to get access to the online link, which even though it was an agreement, would be hard to police.

"Once it's out, there's no jurisdiction but a really high ethical one throughout the world for journalism is that if you agree to certain regulations to get information, that you agree to the conditions around that."

She said while mainstream media largely respected the rules, once information broke through the barricade and reached social media platforms, then a freefall occurred.

"Yes, that's true, so it really comes down to who is going to get that link and there are ways of controlling that and you'd have to be pretty amateur in this day and age not to know the restrictions you can place on something like Zoom and who can connect to it - and that would be those who agree to the conditions."

Dr Strong said some mainstream media were so eager to get a "scoop" they would risk violating ethical standards but she hoped they would not do that in this case.