Terror attack: How police and other agencies reacted 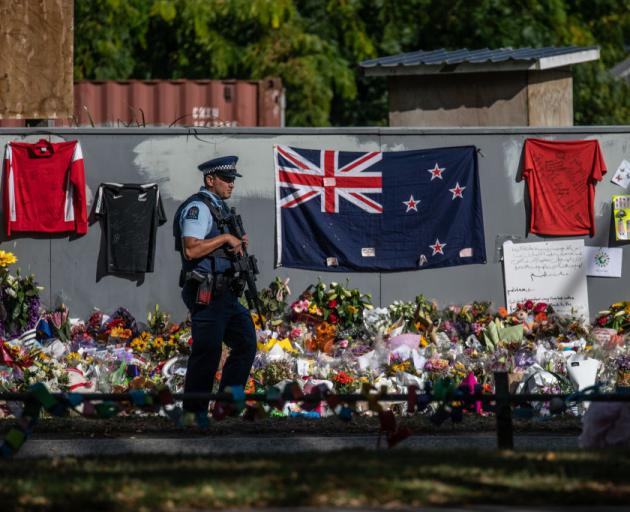 An armed police officer patrols outside the Al Noor mosque. Photo: Getty/Carl Court
The March 15 terror attack was the largest and most complex police operation in New Zealand’s history. Last week, police published its annual report for 2019, which revealed the full extent of its response to the event. Sophie Cornish reports

Dubbed as New Zealand’s darkest day, the March 15 terror attack, resulted in a significant deployment of workers both from around the country and overseas.

The FBI, Australian police and more than 1000 police staff from outside of the city were involved in the response, known as Operation Deans after a gunman opened fire at Al Noor Mosque and the Linwood Islamic Centre.

The accused gunman, a 28-year-old Australian man, is expected to face a two-month trial in June, after he pleaded not guilty.

In addition to Canterbury staff, police deployed 1072 police personnel from other districts, including 137 staff from Wellington, 114 staff from the Central District and 324 staff from service centres and national headquarters.

Their roles involved community reassurance, intelligence collection, investigations, and planning and logistics both in Christchurch and at the national headquarters in Wellington.

Of this 1072, 500 additional uniformed officers from around the country were flown into the city. 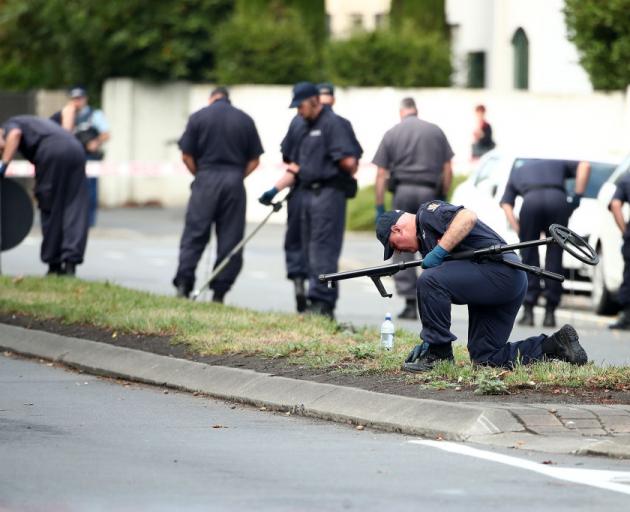 Police search for evidence on Deans Ave near the Al Noor Mosque after the terror attack. Photo: Getty/Fiona Goodall
They were tasked with guarding the hospital, burial sites, the mosques and the prayer and memorial services.

Outside of Canterbury, hundreds of additional armed officers guarded mosques and Islamic centres throughout the country, on a 24-hour-a-day roster.

Nationally, this totalled 825 hours per day or equivalent to a little over 100 full-time staff, for just this role.

“Staff from all corners of police volunteered to be a part of the response – not just front line officers and investigators, but support staff who planned rosters, managed agency liaisons, conducted wellness and safety checks and set up computers, log-ins and phones,” said the report.

St John deployed 50 staff to triage, treat and transport dozens of patients whose injuries ranged from minor to those with critical gunshot wounds.

Agencies set up make-shift offices to specifically to address the needs of victims and their families. 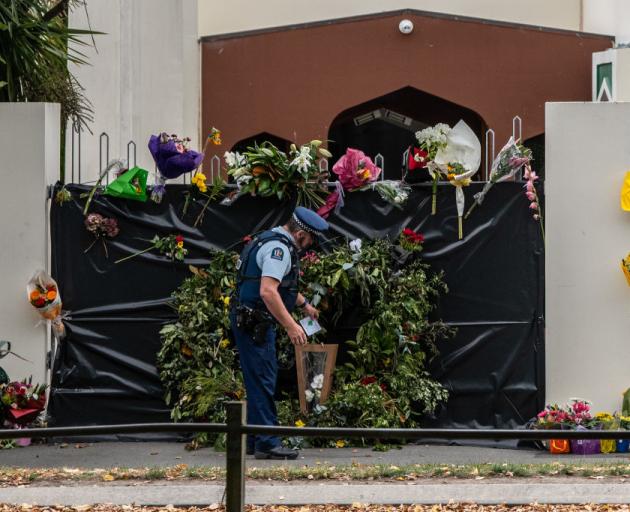 A policeman places flowers on the gates of the Al Noor mosque. Photo: Getty/ Carl Court
“We also received international support from the FBI and the Australian Federal Police,” said the report.

“From their experiences in the United States. It was purely around assisting police to understand the context of it in New Zealand’s environment,” he said.

Additionally to the response, police said a large number of resources were committed to identifying individuals of concern to New Zealand’s safety.

“We have seized a number of firearms as a result of our inquiries and work is ongoing,” the report said

About 900 police staff, alongside NZDF personnel and a significant number of staff from the Australian Federal Police assisted in with the security required at the National Remembrance Day Services held on March 29, in Christchurch, Auckland, Wellington, Dunedin and other locations.

More than 1000 extra police staff were deployed to Anzac services at 374 locations across the country, the following month.

Major security operations were in place for visiting dignitaries, including the Royal visit by Prince William. 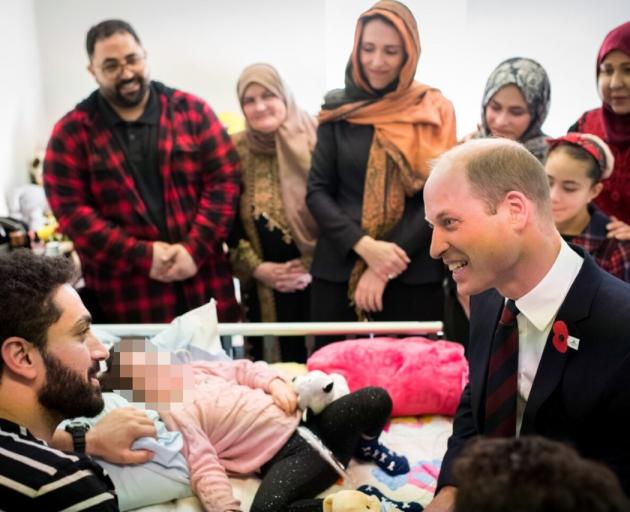 A significant police security operation was launched for visits from dignitaries, including Prince William, after the March 15 terror attack. He visited victims in hospital. Photo: Kensington Palace
Operation Whakahaumanu, which means to ‘revive and restore’ was undertaken, with a focus on restoring the health of communities across the country.

Police evidence-based team researched international practices on post-event recovery and provided insights into which methods would be best suited.

“The activities have now become part of everyday policing,” said the report.

Within days of the attack, police partners, Eagle Technologies, Intergen and Media4Learning turned a few sketches from a piece of paper into a fully functioning app within 48 hours.

Police staff were able to access the app, CheckPoint, for quick and easy access to resources to support visits and interactions with our communities.

The attacks resulted in one of the most difficult and comprehensive disaster victim identification operations ever carried out in New Zealand.

“Returning the bodies of victims to their families was a crucial but challenging phase of the operation,” the report said.

“Unusually, an informal list of victims was shared with the families early on, due to the extraordinary circumstances, and because we were not always able to release the bodies of the deceased within the traditional Muslim time

frames for burial,” the report said.

Wellness checks of first responders was also a priority.

In the first few days following the attack, almost 1400 Canterbury-based staff and communications centre staff were contacted to check on their well-being.

During the initial response and first three weeks after the shootings, 762 consultations between police’s wellness advisers and affected staff took place

“On-site clinical psychologists had 223 one-on-one psychological first-aid sessions with staff in Christchurch, and 380 trauma referrals were made.

“Through partnerships with subject matter experts, supported by international best practice, a medium and long-term response has been developed to ensure police staff remain psychologically fit.

•A Royal Commission into the terror attacks has been extended by nearly five months and will receive an additional $3m in funding, it was announced yesterday.

•1072 police personnel: from other districts were deployed, including 137 staff from Wellington, 114 staff from the Central District and 324 staff from service centres and national headquarters.
•500 additional: uniformed officers, of the 1072, were flown into the city from around the country, tasked with guarding funerals, burial sites and more.
•825 hours: per day was spent nationwide by armed officers guarding mosques and Islamic centres, on a 24-hour-a-day roster. This equates to a little over 100 full-time staff, for just this role.
•40 firefighters: and personnel from Fire and Emergency New Zealand helped in police’s communications centre.
•50 staff: from St John were deployed to triage, treat and transport dozens of patients.
•533 personnel: deployed by the New Zealand Defence Force (NZDF) along with 13 aircraft, and armoured mobility assets to assisted in the response.
•900 police staff: alongside NZDF personnel and a significant number from the Australian Federal Police assisted with security at the National Remembrance Day Services.
•1000 extra police staff: were deployed to Anzac services at 374 locations across the country.
•4934 visits: to places of worship, education, gun clubs and ranges by officers in the aftermath.
•48 Hours: was the amount of time it took to create a fully functioning app to help police. It was built from only a few written sketches.
•90 disaster victim identification officers: along with assistance from NZDF disaster victim identification specialists worked in “extraordinary circumstances” which included releasing an informal list of deceased victims to families early on.
•1400 Canterbury police staff: and communications centre staff were contacted to check on their well-being, in the first few days.
- 762 consultations: between police’s wellness advisers and affected staff took place in the first three weeks.
- 223 psychological sessions: were had with on-site with clinical psychologists and 380 trauma referrals were made.
- 60 million: people were reached through police’s social media in the first 48 hours.