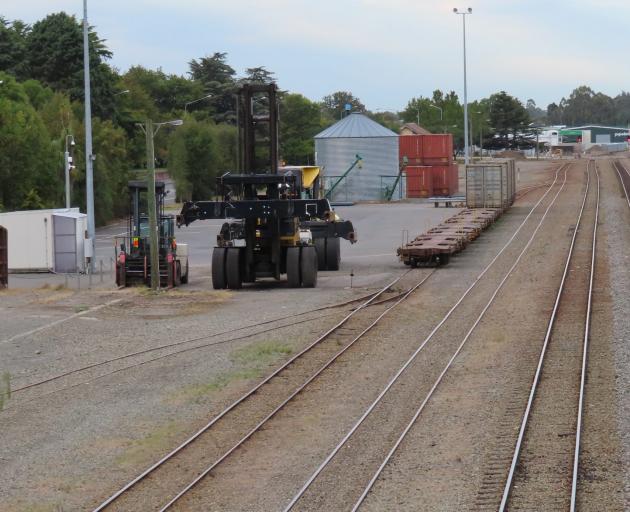 Ashburton's rail freight hub off West Street. Photo: Supplied
A new Mid Canterbury company has taken over KiwiRail’s container site in Ashburton, the first step in a big plan to relocate it to Fairton.

Fairfield Freight Hub, owned by the Wareing Group, took over container operations on March 1 and aims to grow rail freight volumes from about 500 container movements a year to 6000 in the short term.

The operating agreement paves the way for serious talks between KiwiRail, Fairfield Freight Hub and the Ashburton District Council to explore moving to a new container terminal in Fairton, on the site of the old freezing works.

That site could see 20,000 container movements a year, as mainly farm produce is moved to market.

KiwiRail’s Alan Piper said such a move would also encourage greater use of rail and reduce the number of trucks on the roads.

Ashburton Mayor Neil Brown said it was an exciting plan.

The agreement would ensure there was an ongoing container terminal in Ashburton, which would be good for businesses moving goods and help ease congestion on roads.

It also gave confidence to the next phase of discussions.

He said relocating the site would reduce traffic congestion in central Ashburton as trains could pass through the town without stopping to pick up containers and blocking crossings.

Wareing Group spokesperson Mark Wareing said the current container site on West Street would remain open until the new freight hub was ready for use.

“We’ve been working closely with KiwiRail and the Ashburton District Council to streamline freight volumes in and out of Mid Canterbury,” he said. “We’re looking forward to collaborating with all parties once final agreements have been signed off on the move to Fairton.”

An existing rail siding at the old freezing works site would be re-engineered.

He said the company was working to grow rail use in the region. “Helping our exporters and freight partners move more freight by rail makes sense both from a business and sustainability perspective and we hope this will stabilise the supply chain issues our clients are facing.”