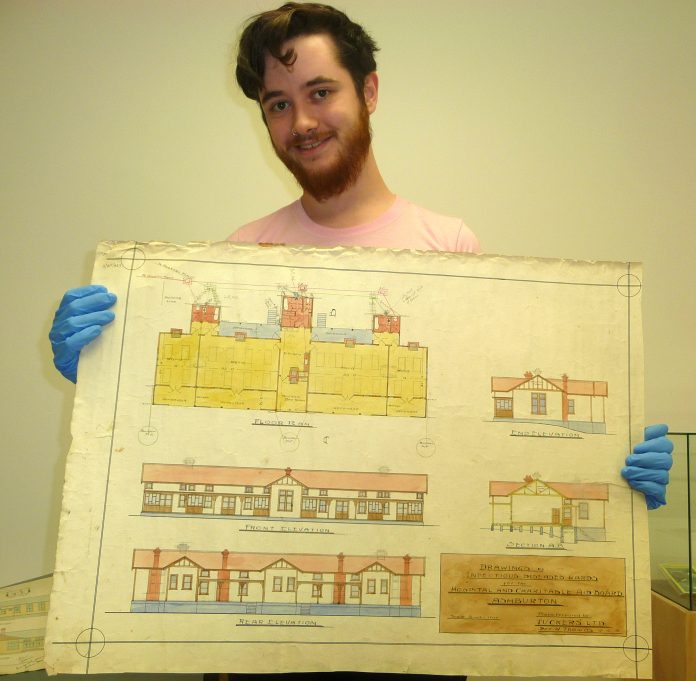 Ashburton Museum archives officer Connor Lysaght with Billy Thomas's drawings of the infectious diseases wards for the Hospital and Charitable Aid Board Ashburton in 1916. Photo: Ashburton Courier / Supplied
The next exhibition at Ashburton Museum will showcase a small section of design work from well-known Ashburton architect William “Billy” Thomas.

The Billy Thomas Archive was donated to Ashburton Museum by Rodger Bradford, who in turn was given items by Thomas’ former business partner Hank Ward in the mid-1980s.

The designs provide information about a number of local buildings Thomas worked on and offer an insight into the way that people used to live.

Thomas was born at Wakanui in 1891 and is particularly known for the Cape Cod style homes he designed from 1923, some of which still stand locally today.

Not all of Thomas’ designs were grand, some were modest two-room cottages.

The collection also includes his drawings of public buildings such as halls, churches, business premises and shops, and also the Ashburton Hospital and Ashburton Borough Council buildings.

The designs show the architect’s attention to detail and the care he took in his work.

Ashburton Museum acting director Maryann Cowan said some of the drawings were beautifully hand coloured, while others carried signatures or annotations by inspectors and tradesmen, the men that Thomas worked with in his illustrious career.

She said the use and names of rooms were different in Thomas’ day.

Houses no longer included a dairy, scullery, drawing room or maid room, or a designated room for coal.

In his earlier designs, Thomas sited toilets at the back porch, but in later designs the bathroom included a toilet.

His kitchens were often smaller rooms and his designs included garage forecourts, alterations to buildings and the now demolished back area of the Ashburton Club and MSA.

She said the archive was a great resource for people researching their buildings, as well as those looking for insights into how buildings were constructed in the mid-century period.