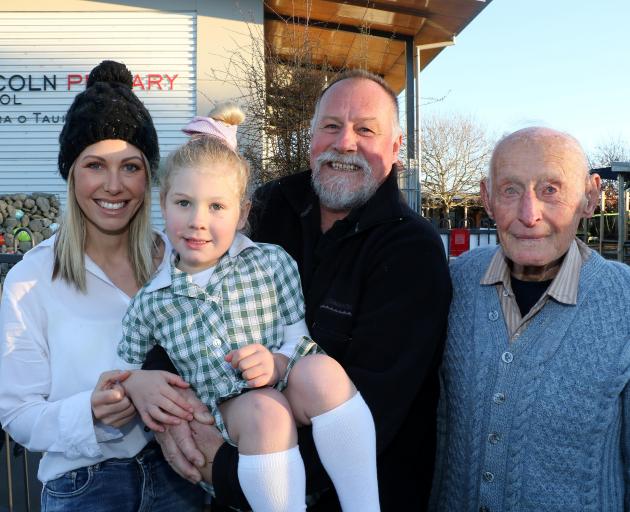 Conrad Eilken was one of Lincoln Primary School’s original pupils when he enrolled in 1929. His great granddaughter, five-year-old Iris Norton, had her first day at the school on Monday. Her mother Haylie Eilken and grandfather Ian Eilken (also pictured) also attended the school. Photo: Star News
Memories of Lincoln Primary School going back to the 1920s were recalled this week as a local family moved into its fourth generation of attendance.

Lincoln’s oldest living resident to have been born in the town, 97-year-old Conrad Eilken, was proud to see his great granddaughter, five-year-old Iris Norton, enter through the school gates for her first day on Monday.

“I knew every person in every house in Lincoln when I was a kid,” Conrad said as he remembered his childhood days.

The school was at the same site. It had three classrooms, with only two in use, one for primers and one for standards.

Converting a rugby try on the school field was done by kicking the ball over a specific section of fencing, out onto Boundary Rd at one end or into the neighbour’s paddock at the other end. Retrieving the ball from the road was not a problem.

"There was not a lot of traffic in those days. Mr Henly (a local farmer) used to go past in his old Fiat car, and that was about it,” Conrad said. 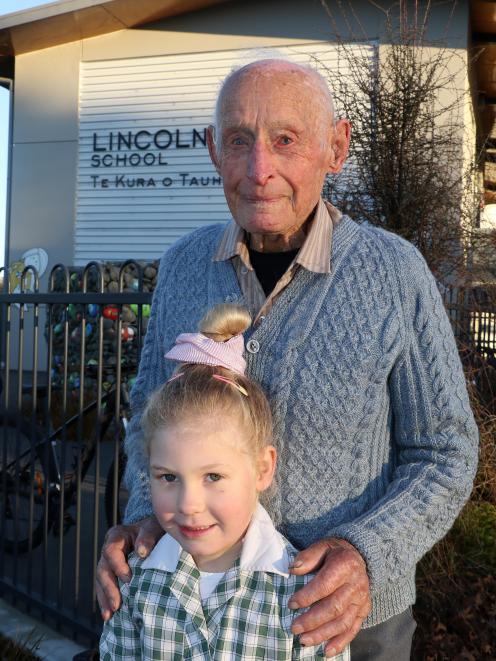 Conrad Eilken and his great granddaughter, five-year-old Iris Norton. Photo: Star News
The road was shingle, and conditioned by a horse-drawn grader.

The town had a train station, and pupils would catch the train to Hornby for school dental clinics.

When they were not in the dental chair, they could be powering the dental drill by moving one of their feet up and down on a treadle.

Conrad recalled one occasion when fellow pupil Rex Moir was in the dental chair, and he was working the treadle relatively slowly, thinking he was being kind to his friend.

“The dentist said go faster with the treadle, I thought I was going as fast as I should!”

Lincoln Primary School’s roll was only about 50. Today, it has grown to more than 600.

Iris was excited to be attending on her first day, having been impressed by what she saw on previous school visits.

“I like all of it,” she said when asked what was her favourite thing about the school.

They said they were proud to see the family’s attendance move into its fourth generation.

“It’s nice for our family, because we were one of the first families in Lincoln,” Haylie said.