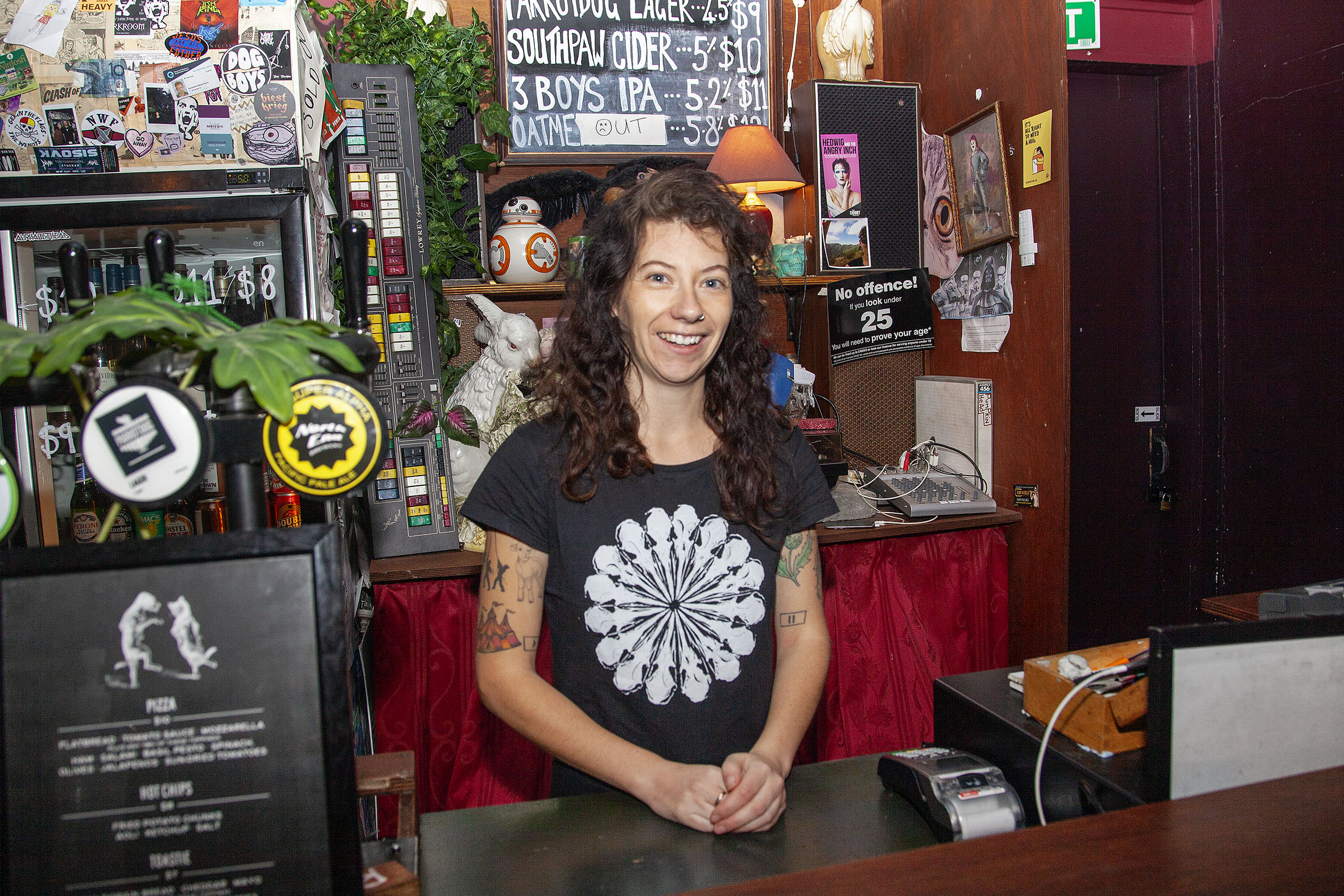 Feather Shaw co-owns Darkroom and is helping more young people from diverse backgrounds become involved in the city’s arts scene. Photo: Geoff Sloan ​
Feather Shaw recently started a full-time role as co-owner of Christchurch venue Darkroom. She has been heavily involved in the arts scene as a performer and support person. Matt Slaughter spoke to her about her goals to support city musicians and artists in this role and her background in creative arts.

Your real name is Emma, why do you use the name Feather?
I’m quite a little human and I was very, very light as a baby and a toddler and I was light as a feather and then it became a nickname and then when I got older and started using it as a stage name, when I started doing burlesque and cabaret and stuff, it just was natural to use Feather.

What do you want to achieve for the Christchurch arts community during your time as Darkroom co-owner?
Our venue is a really small space and it’s quite forgiving. It’s the kind of place where an emerging band can play to 20 people and do those kind of really low risk [shows]. The space is still going to feel full and okay if only 10 or 20 people come to your gig. A lot of more established artists played some of their very early gigs here. So, Yumi Zouma played their first-ever gig at Darkroom under its old management when it first opened in 2011, people like Marlon Williams, Nadia Reid and Aldous Harding have played there over the years and I think it’s a really important stepping stone in getting to a place of higher success or producing more work as a performer of any medium, is having those accessible, little spaces to start out in. We provide that space as a small venue, but then, my business partner and I, we’ve worked in various event management and venue roles and performance and backstage and logistics and administrative roles within the arts, that we’re like, wow, we’re sitting on quite an incredible skillset here that we want to share with others free of charge to help them develop, I suppose, the admin skills to back up their creative talents. In particular, we have a real focus on reaching out to young adults, so emerging artists, people who are maybe still students or in their late teens or early 20s. Also, we want to really focus on making sure that we provide space for diversity, so it’s not all, kind of, straight, white men on the stage. It’s like are we seeing indigenous artists, people of colour, LGBTQI+ artists? And, for me, as a woman in the scene, it’s really important to have female and non-binary representation on the stage as well. 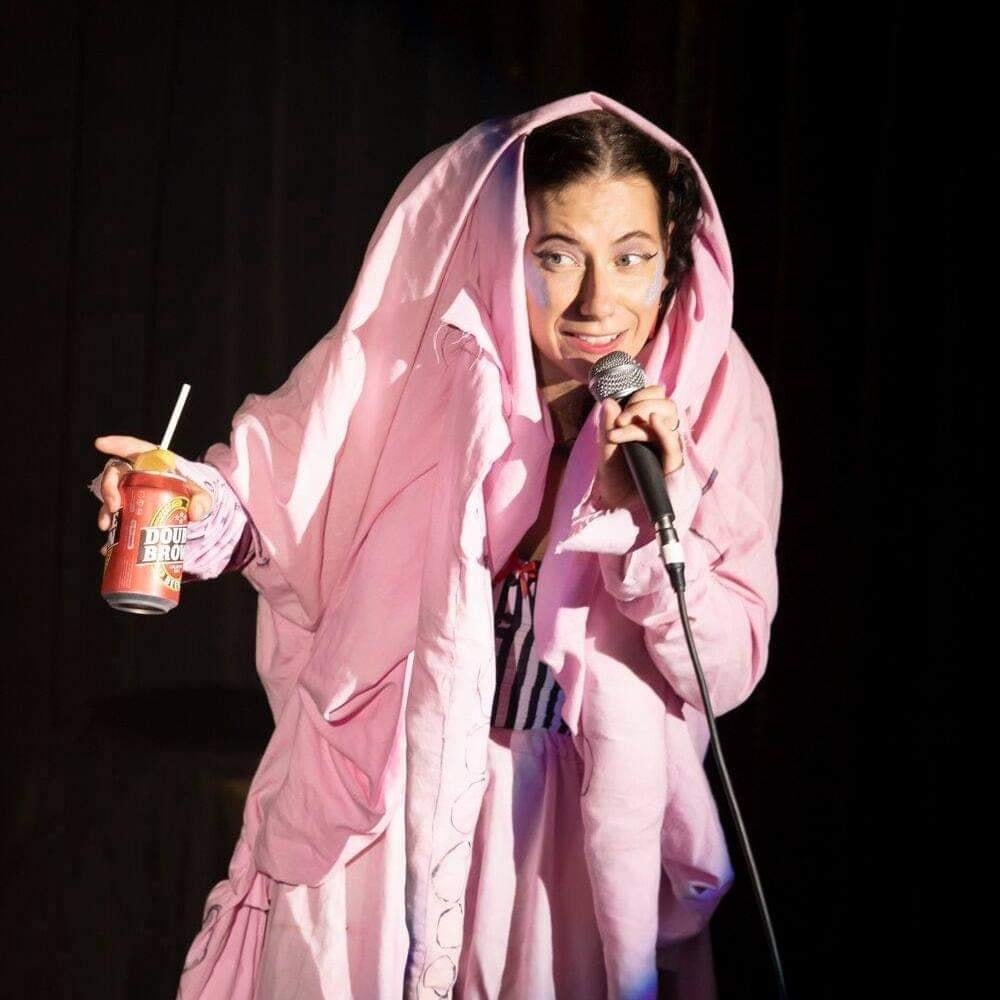 Feather Shaw is a performing arts all-rounder and has done stand-up comedy, burlesque and cabaret. Photo: Supplied
What is your background in creative arts?
I’m from Ōtepoti, Dunedin. That’s where I grew up and went to high school and university. I did a theatre studies degree down there and I actually only moved to Ōtautahi, Christchurch about three years ago. Since being up here, I’ve done a bunch of different things, I’ve studied contemporary dance at Hagley College, I worked at the Court Theatre as a stage manager and follow spot operator, I worked in some backstage roles at Isaac Theatre Royal, I worked at Hang-Up Entertainment in logistics for big touring shows pushing road cases and hanging lights and stuff like that and then the job at Bromley Community Centre, which was event and community development kind of stuff. In terms of a performance skillset, I do stand-up comedy, burlesque, cabaret, lots of event hosting, I MC quite a bit, dance, circus, theatre, I’ve written and directed plays, so [I’m] kind of a performing arts all-rounder, I guess.

What are some of the most memorable things you’ve done as a performer?
One of my most recent ones that I’ve been really excited about was my first experience with making videos and online content. During lockdown, I did a social history series called Woolston Walkies, because I live in the suburb of Woolston. Every day I visited a different location and it was kind of funny and goofy. I’m out for my daily exercise walk and we’re going to the old fish factory, the old gumboot factory. There were all these underlying themes of, like, poverty and that it was a low socio-economic area and that the river’s really polluted, but the river used to be a really important kai gathering resource for local iwi pre-European colonisation. We were exploring industrialisation and big factory layoffs and factories closing down and stuff. Over 25,000 people were reached through the posts, they were viewed between 200 and 2000 times each video, my likes and engagement on my artist [Facebook] page increased by, like, double. I went from kind of having 500 fans to, I’ve got about 1200 now and I was getting fan mail. Some of my other favourite [moments] probably have been, I did a solo show about mental health and my dad passing away about five years ago now and a couple of years after his death, I kind of wrote a one-woman play, storytelling kind of thing and toured that around to Dunedin, Christchurch and Auckland and all of the shows sold out and all of them got standing ovations.

Have you performed with anyone famous or noteworthy?
In terms of comedy, I’ve opened for or been on the same lineup as the likes of Ben Hurley, Nick Rado and Cori Gonzales-Macuer, who was in What We Do in the Shadows. I opened for Cori independently at a show in Dunedin some years ago and then with Nick Rado and Tarun Mohanbhai and Ben Hurley, we were involved in a pilot for a silly, little TV series, web series thing called Flat Gigs Dunedin and we filmed a comedy show just in a grungy student flat in Dunedin. 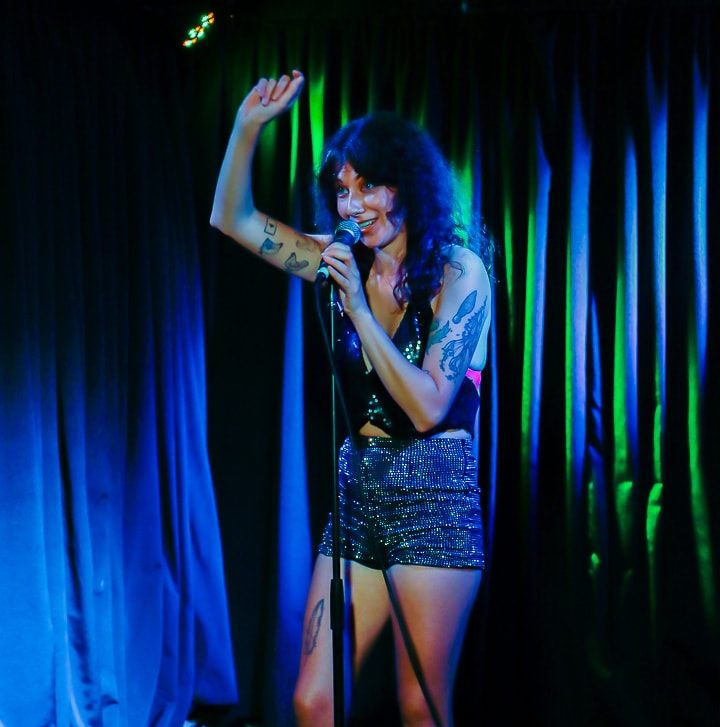 Feather Shaw. Photo: Supplied
Have you had any embarrassing moments on stage?
I think I’ve been pretty lucky generally speaking, but working backstage at Court Theatre as an assistant stage manager on the summer musical, Chicago, there were some moments of just absolute chaos when something would go wrong and I’d be hidden on the side of the stage with a roll of duct tape taping back a set piece together or whatever while trying to hide from the audience view.

How supportive has your family been of your creative endeavours?
I grew up pretty normal. I grew up in a pretty bogan family and we grew up pretty poor and we grew up pretty bogan but my parents were always really relaxed, like, there was never any pressure to have to succeed academically or have to want to have children and buy the house and have the mortgage and be a doctor or an astronaut or whatever. As a kid, I really wanted to be a rubbish truck runner. I think what has helped me a lot is that my parents never really forced me into things. My dad has passed away now but he was my absolute biggest fan with comedy and cabaret, he would come to all my shows. My mum lives down in Invercargill and she loves what I’m doing and is really supportive of it all as well. My family has absolutely backed me. 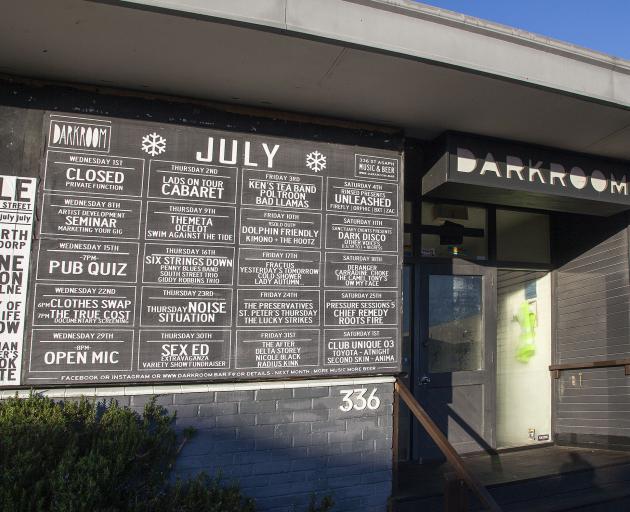 Darkroom on St Asaph St. Photo: Geoff Sloan
Tell me why you decided to leave your previous job to start co-managing Darkroom full-time?
I was working 20 hours a week, just a part-time job which was enough for me to live off, at Bromley Community Centre. I was the programme support worker there, so I largely helped facilitate all the community groups like low impact exercise for elderly people, toddlers playgroups for parents and, like, pre-schoolers and then, all the community events – the big fair, the big Matariki celebrations, market days [and] all sorts of bits and pieces. I really liked that line of work. Then my business partner Nick and I bought Darkroom and because it was a pretty scary venture going fully into self-employment in the beginning, I decided that I could keep both jobs, so still do my 20 hours a week at Bromley and then do another 20 [or] 30 hours a week running Darkroom. I did that for a year, kept both jobs, and, after a year, Darkroom was in a financially stable enough position that I kind of weighed things up and thought I can take my skillset from Bromley, which is kind of community development, and apply that to my job running a venue.

What impact of the Covid-19 pandemic on Darkroom? And tell me about the fundraiser that happened to support the venue?
It was a really uncertain time not knowing how long it would take to contain and work towards eliminating the virus, not knowing is this going to be four weeks we’re out of action, three months, six months? I don’t think Darkroom was ever at risk of closing, that wasn’t an option for us. We started thinking are their grants? We started to think is there some funding or grant money that we can apply for and we had a look around and then we saw that some other venues had had success with crowdfunding. We’d never done it for anything before and we were like, okay, let’s do one. For ours, we made $16,000, our goal was only $10,000. 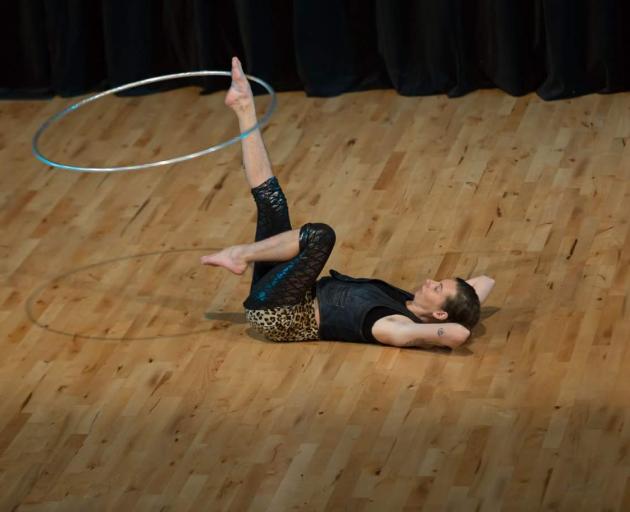 A life-long passion for wildlife