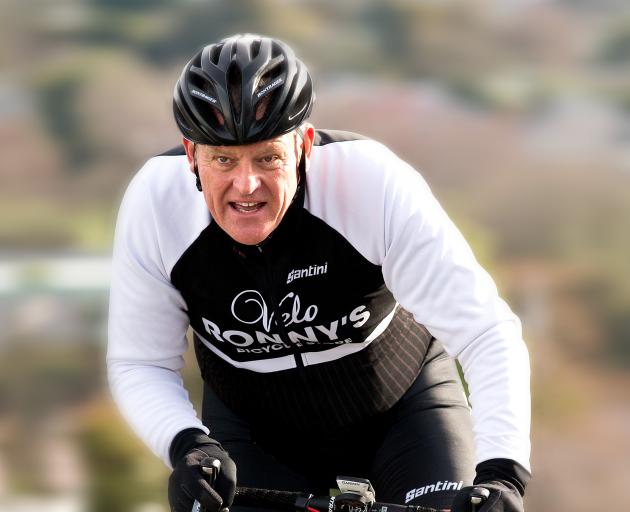 Craig Adair enjoys getting out on the bike two to three times a week.
Before winning a Commonwealth Games gold medal, winning the ‘king of the bridge’ title was how Craig Adair defined a successful day’s cycling.

In his early years, while attending Christchurch Boys’ High School, Adair and four of his close friends rode together fromIlamto school. Just before reaching school they would race their RayleighTwentysto the bridge onKahuRd. The daily king of the bridge would be rewarded by calling the shots for the day.

“The other four would be your servant for the day . . . you’d go to the tuck shop stand in line if the winner wanted a pie. We did all sorts of stuff, even if you wanted your shoe laces done up,” said Adair.

After six months of the novel race, something the school’s headmaster said in an assembly about one of the boys would inspire Adair to get serious about the sport.

“He said: ‘Is Mark Nicholls in the assembly.’ We thought he was in the s**t . . . he stood up and then the headmaster said can everyone please clap their hands for Mark, he is the South Island cycling champion well done Mark . . . we all looked at each either and thought we beat him most days to the bridge, this cycling must be easy,” said Adair.

The group went onto form a school team which dethroned Shirley Boys’ High School’s long stranglehold on the Canterbury schools time trial dominance. They also finished second at the national competition in Levin where they narrowly lost to Auckland Grammar.

“We loved it because we could go out on a Wednesday at lunchtime for sports. Everyone else would be at rugby or soccer practice and we’d just ride out the school gates. We didn’t do much training, we’d go and play pool or something,” he said.
Adair was doing an apprenticeship at a bike shop and riding on the weekends. After claiming a number of titles at the national championships, he was then selected for the 1982 Commonwealth Games in Brisbane where he would win gold in the 1km time trial.

Due to having done little competition in the race category Adair was seeded 35th for the event meaning he watched 34 other riders go after he had set his time.

The following year Adair finished fifth in the 1km time trial at the WorldChampionships, but would later be upgraded to fourth after a West German rider was later disqualified for drug cheating.

“I managed the New Zealand Olympic team at Beijing in 2008 and the manager of the English team at the time was a guy called Heiko [Salzwedel] . . . he said to me ‘oh I know that name’ and I said, yeah worlds 83, you were the East German coach . . . he said: ‘Oh yeah fourth.’

Then he put his hand out, I shook it and he said you won because everyone was on the gear,” said Adair.

In 1984 Adair finished fifth in the same event at the Olympic Games in Los Angeles. After completing his events early in the games he enjoyed time watching his fellow New Zealand athletes and was also partial to the Olympic village parties and even stealing the odd security golf cart for a joyride.

Following the games he pulled the plug on competing at the top level at just 20 and with his best years ahead of him.

“I didn’t really want to do it all again because it costs you a lot . . . I didn’t have any backstop or education and I knew that. I had done my apprenticeship at the bike shop and I thought I should come back and use that the best way I could which was opening a bike shop,” he said.

After returning, Adair created Craig Adair Cycles which grew to three shops in Christchurch, five in Auckland, one in Dunedin and one in Nelson. However, the business went into receivership in 1994.

“It was too big too quick . . . I suppose it keeps you real because up until then everything was going fantastic,” said Adair.

In 2014 Adair was declared bankrupt following a number of failed business ventures.

One of his proudest moments in cycling came in 2008 as the manager of the New Zealand Olympic track cycling team which won a silver with Hayden Roulston in the individual pursuit and bronze in the team pursuit with Sam Bewley, Roulston, Jesse Sergent and Marc Ryan.

“I felt better about that than anything else I’ve ever done.”

“I actually like it now more than I did then. No pressure I can go out and enjoy myself, you don’t have to kill yourself, you can go at your pace and enjoy it,” he said.

Following the February 22, 2011, earthquake Adair was given an award by the city council for his role in evacuating a high rise building. He is still involved with the aftermath of the earthquake each day as the sales manager for My Insurance Claim – an Australian-based firm which goes against insurance companies and help people with their earthquake claims.

“We help people with their earthquake claims. I get more out of that than I did in any bike shop. I had issues with my own earthquake claim and I know now how to get the money for the clients,” he said.