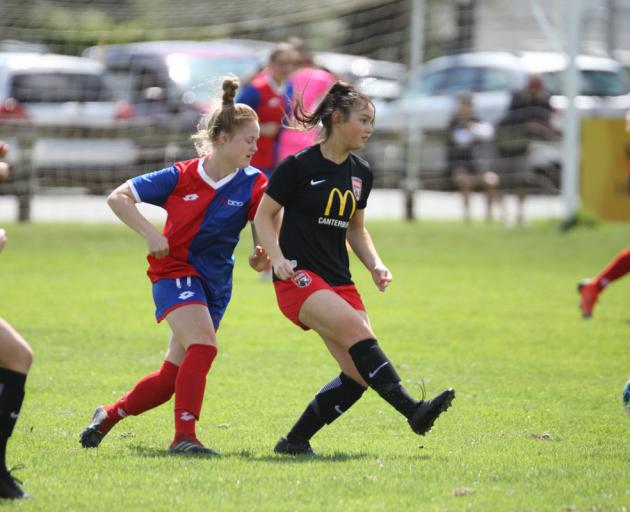 Macey Fraser scored Canterbury's final goal in their 5-0 rout of WaiBOP on Sunday. Photo: Lawrence Gullery
Canterbury United Pride are yet to concede a goal in their defence of the National Women's League after a 5-0 thrashing of WaiBOP in Cambridge on Sunday.

It looked like it would be a long afternoon for the hosts when Rebecca Lake headed home a corner for Canterbury early on. But it wasn’t until nearly an hour into the match that the Pride finally had a second, with Britney-Lee Nicholson poking home from close range.

A pair of rapid-fire goals then finished off WaiBOP. Nicholson side-footed her second just a few moments before Tahlia Herman-Watt fired in Canterbury’s fourth. Macey Fraser also got her name on the scoresheet from the penalty spot late on as Canterbury returned to the top of the table after four rounds and last week’s bye.

“The girls took their time to dissect WaiBOP’s defence but I think we’d tired them out a lot by the 70th-minute so we managed to be successful on the goal-scoring front,” said Pride coach Alana Gunn.

“We managed to have a lot of the possession and we capitalised on that in the end which was really pleasing to see.”

Her WaiBOP counterpart Nico Girard was pleased with the discipline shown by his players and is looking forward to their continued development over the coming weeks.

“We went in with a game plan and I think you could see that there was a bit of purpose to what we did,” he said.

“So there were some positives from that but there’s obviously some things we have to work on. We have an organised shape and the thing to work on in the future is to progress forward from that shape. The girls are quite resilient and I think they understand that we’re going through a process, which they’ve bought into.”
Meanwhile, Auckland were made to work hard for their three points by Southern United.

The southerners were yet to be defeated prior to their trip north and harbour title ambitions of their own. But they headed back to Dunedin empty-handed after a 4-2 loss.

Britney Cunningham-Lee put Auckland in front after just a couple of minutes but Southern were back on level terms by the 30min mark after a headed equaliser from Ruby Anderson. The hosts got their noses back in front just before the break when captain Stephanie Skilton found the net from long-range, but again Southern came back with a header, this time provided by Kirsty Hayr.

Any hopes the visitors had of taking home at least a point were then undone in a 2min period. Cunningham-Lee shot from outside the box for her second before Tessa Leong made the points safe for Auckland by poking home a Skilton pass.

“It was a hard game, Southern were a tough team to break down in the first half,” said Auckland coach Nic Downes.

“But we held our ground and managed to put in two goals in the second half. It’s always good winning at home and to do that in our first home match of the season is exactly what we prepared for.”

Northern enjoyed a more comfortable afternoon at their new home of Allen Hill Stadium in Devonport, Auckland, which is quickly becoming a fortress after two consecutive wins.

Central had not picked up any points from their first three games and that seemed unlikely to change after finding themselves 3-0 down by half-time. Rene Wasi, Chloe Knott and captain Saskia Vosper were all on target to put the Lights well in control but Central did threaten to make a game of it when Natalie Olson pulled one back in the second half.

Normal service soon resumed for Northern, though, as Kelli Brown, Ava Pritchard, Dayna Stevens and Arabella Maynard all added to the tally to make the final score 7-1.