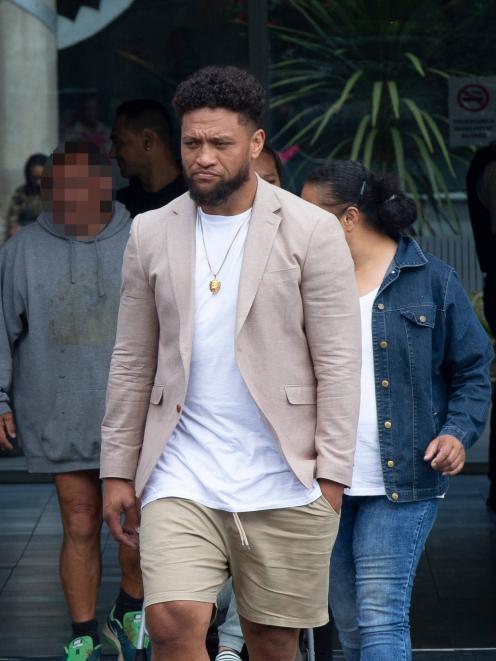 Manu Vatuvei outside the Manukau District Court after an appearance for charges of importing and supplying methamphetamine in December 2019. Photo: Leon Menzies
Retired rugby league player Manu Vatuvei has pleaded guilty to importation of methamphetamine.

The former Warriors winger and reality TV celebrity, 35, admitted the crime while appearing at Manukau District Court on Wednesday.

The charge carries a maximum penalty of life in prison. Vatuvei is set to be sentenced in December.

The plea nearly brings to an end to a nearly two-year legal saga, including 18 months in which he was identified only as "one of the biggest names in New Zealand sport" due to his ultimately failed fight for name suppression.

Vatuvei - listed in court documents by his full name, Manu Mapuhola Mafi-Vatuvei - was one of four people arrested in 2019 following a joint investigation with Counties Manukau police and Customs into methamphetamine supply.

He was charged with importing, possessing and supplying methamphetamine, which carry a maximum penalty of life imprisonment, in September, October and November that year.

Vatuvei kept his name suppressed from November 2019 until May 2021, when he revealed himself as the defendant in a video post to Instagram.

Name suppression was initially ordered to protect an ongoing police investigation, but in November 2020 - one year into the case - prosecutors no longer sought it. Vatuvei, however, attempted to have the suppression order continued anyway.

His lawyer argued to the District Court and later to the High Court that the rugby star would face extreme hardship if named and his fair trial rights would be jeopardised. But his application was declined after Crown prosecutor Jessica Pridgeon argued that being well known in and of itself didn't mean the defendant would suffer extreme hardship.

"In 2019 I was charged with importation, possession and supply of methamphetamine," Vatuvei said in his social media post the night before his suppression was set to expire. "All these charges are accusations and I'll be fighting my innocence for these charges. I know there will be a lot of questions that are wanting answers but I've been advised from my legal team that that's all I can talk about."

He had been scheduled to go to trial this month.

Affectionately nicknamed "the Beast" by fans, Vatuvei played for the Warriors from 2004 to 2017 - the team's top try scorer for many of those seasons - before spending his final year of professional rugby league in Europe with the Salford Red Devils.

During that same time, he represented New Zealand at 29 test matches, including the team's triumphant 2008 World Cup, during which he set a tournament record for most tries in a single match by a New Zealand player. As a result, he was named international winger of the year. He also represented Tonga twice in 2017.

In 2018, Vatuvei fought in his first and only professional boxing match as an undercard for Joseph Parker, but he hung up the gloves after discovering a brain cyst.

He then transitioned to dancing, winning reality TV series Dancing with the Stars in June 2019, just months before his arrest.

His court case is not the first time Vatuvei has faced public controversy.

In 2016, Vatuvei was one of five Warriors players who were dropped to reserve grade and stood down from test selection as punishment after they admitted taking pills and energy drinks on an unsanctioned late night out in Auckland.

"We're all embarrassed by what we did," he told the media after taking a week's medical leave. "We've got standards in our team and something that myself, having been at the club for a long time, it was not something that I liked to do.

"To all the members and sponsors, (I'm) sorry to have put you in this position."

In 2018, Vatuvei found himself at the centre of unwanted attention again after he appeared in a video promoting the Head Hunters gang. When approached by the Herald at the time, Vatuvei said he had no idea he'd be featured in the video.

"I was just there for a family day for a few friends who asked me if I could come and support it and join in with the kids," he said. "I'll always do anything for the kids – that's why I went along."

Asked if he had friends in the Head Hunters, Vatuvei said: "I've got heaps of friends everywhere – there are some in gangs and there are some who aren't in gangs."