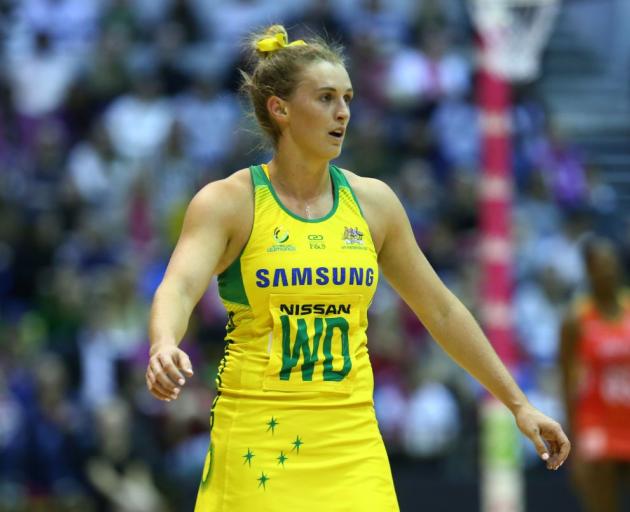 Gabi Simpson is back for the Diamonds for the first time since 2018. Photo: Getty Images
A lot has changed since Australian Diamonds' player Gabi Simpson played a test against the Silver Ferns more than two years ago.

As a consequence of Covid-19, the Diamonds went through 2020 without any international tests.

The Diamonds have a new coach and in an extended Constellation Cup squad of 18 - half are potential debutants.

The squad has two days in quarantine in Christchurch and Simpson said it was exciting to be on an international tour.

"Particularly coming over here to New Zealand, just so grateful to be able to fly over those mountains near Christchurch and seeing all the snow and it's a beautiful place to be so we're very lucky," Simpson said.

The last time Simpson met New Zealand was in the Constellation Cup in October 2018, when the Ferns were rebuilding after the disastrous Commonwealth Games campaign earlier that year.

Simpson said New Zealand were a far stronger side now.

"The way that New Zealand have developed as a squad has been pretty incredible to watch unfold. They're very strong, their depth is there now and they're really great as a unit so very much stronger than they were back in 2018.

"They obviously have lost a few of those experienced players throughout that period of time as well so that'll be interesting to see how that unfolds. But they've shown so much growth across this period of time and they're looking pretty fierce at the moment."

The Constellation Cup in October 2019 turned out to be Maria Folau and Laura Langman's final swansongs. The Silver Ferns will also be without hugely experienced defender Katrina Rore for next month's series, as she's pregnant with her first child.

Two of the four tests in that 2019 series came down to one goal and Simpson is expecting nothing less.

"There's going to be a bit of cat and mouse I would suggest. If you look at the teams compared to the 2019 World Cup both sides are significantly different so I think there will be a little bit of finding a little bit about each other and with that comes I would suspect a lot of close games. And plus it's Australia verse New Zealand, they're always tight."

Australia is missing talented shooter Steph Wood and defender Emily Mannix as they recover from surgeries, while dynamic shooter Gretel Bueta is on maternity leave.

While it's one of the least experienced Diamonds teams in recent times, Simpson said Australia's domestic league, which attracted some of the best netballers in the world, was the perfect training ground.

"If you look at the Super Netball league and how many caps each of those players have in their own teams back there, they are actually quite experienced. So yes in terms of international caps we are probably less experienced than we have been in the past but they've got a lot of brains in them I can tell you, a lot of maturity."

Simpson was vice captain the last time she played for the Diamonds in January 2019. A few months later the 40-test cap player just missed out on selection for the World Cup.

The series is an opportunity for the 28-year-old to regain a regular place in the side but she said it would be incredibly competitive to get out on court.

"Particularly when we've all travelled together, the training sessions are unreal because you go out and you just cannot take a backward step because the competition is so high.

"I guess having a couple of years away I've just been able to focus in on the Queensland Firebirds back in the Super Netball league. Just playing some hard yaka Aussie style netball, that's the real one on one. If I get a chance in this tour that would be fantastic but as long as I've done everything that I can then that's all you can worry about."

Simpson, who captains the Queensland Firebirds, will be a strong candidate to emerge as a contender during the series.

Simpson said Marinkovich, who replaced Lisa Alexander last year, was bringing her own style to the role.

"It's very much embracing everyone's strengths and utilising them as a group. At the end of the day everyone in this Diamonds squad can play netball but it's how we're going to play that netball together that's going to get us to improve and become the best in the world.

"That's kind of the style that she brings and we're really embracing that so it will be great to get out on court and see if we can put some things together that she's brought to the table."