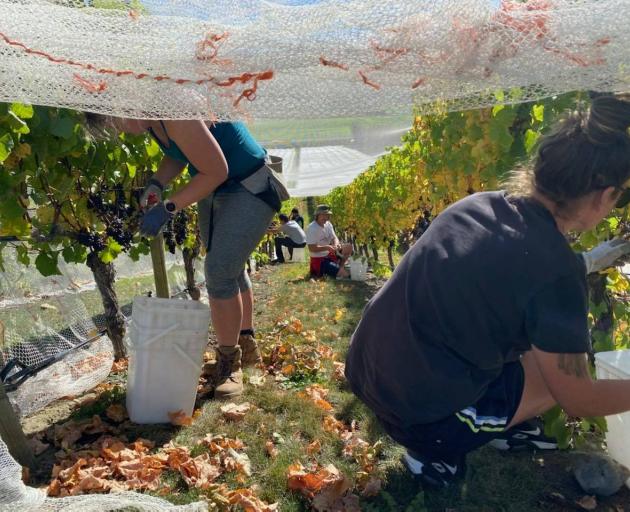 Staff members hard at work, harvesting grapes at Ostler Wines. PHOTO: SUPPLIED
Waitaki winemakers have been among the lucky ones this year, reaping a solid harvest despite a challenging year for New Zealand growers as a whole.

“I think us and Central [Otago] were the only ones that were sort of up … We’ve actually had a pretty good run here in the Waitaki. It was a good harvest.”

Ostler co-owner and managing director Jim Jerram said there was a widespread problem with some frosts in the spring, which caused “major reduction in crops” in some South Island regions.

“We had cold dumping frosts rather than radiation frosts – very hard to fight. There were a couple of them in October-November … Marlborough is well down, the lowest it’s been in some years, and Waipara was badly hit,” he said.

“The Waitaki was affected, but nothing like as badly .. shall I say, it did a little

Weather-wise, it was a “season of everything, really”, Dr Jerram said.

“It started off with major drought – the winter drought last year, going into the spring, then the frosts, and then an excessive amount of norwesterly wind, and then floods in the New Year.”

There was a cooler than usual January followed by a “pretty good autumn. So overall, I think everyone was pretty happy with the quality and mostly with the quantity of fruit from the Waitaki this year.”

Ostler had its wines made in Cromwell by contract winemakers VinPro, and Dr Jerram said they were looking very good when he visited earlier this month.

Mr Ballantyne said the biggest challenge facing Waitaki grape growers this year, was the staff shortage. Closed borders due to the Covid-19 pandemic meant it was difficult to find staff to harvest the fruit.

“It was a struggle for a lot of people really, but we got there in the end,” he said.

“We’re trying to come up with a plan of how to work together a bit more and build a local team.”

A contractor, for whom Mr Ballantyne worked, had been called in to help, along with a group of Vanuatuans who they had managed to “get through the system” and were based in Cromwell, he said.

“I think they’re even being shipped up to Marlborough, to help Marlborough pruning, because the whole industry is struggling. The sticking point is whether they’re skilled workers or not, but the Government doesn’t think they are.

“They are skilled workers, because there’s a big difference between someone who’s done it for three or four years in a row, and someone who’s walking off the street.

“It basically takes a year of training to get them up to speed, and that’s if they’re good. A lot of people, it’s a lot harder work than they expect. Some people sort of go, romantic than this’.

“It is good work. But you do have to work – you don’t sit there drinking wine all day.”

“So if Marlborough has a bad year, everyone has a bad year. But they probably have better wine than normal, because they had less volume.

“You sort of want the volume, but you want that good wine too. It’s trying to find that happy medium.”

There had been high demand globally for wine, which was exacerbating the supply issues.

“So normally, a year like this would be OK, because they’d still have stock. But apparently all the stock is almost bought out, the demand has been so great.

“It’s actually been a very good year, when it comes to sales of wine … it’s a pity we don’t have the same volumes again,” he said.