By Simon Henderson
0 Comments
Church worship has a new meaning for a young rodeo fan.

Jenna Jowett (3), of Outram, has fallen head over heels for rodeo champion Sam Church, of Palmerston.

Her mother Tracey Jowett said it all started when Jenna met Mr Church at the Waikouaiti Rodeo earlier this year.

Jenna "adores him", and loved all things to do with the rodeo rider.

"She holds it by one ear and rides it on the trampoline." 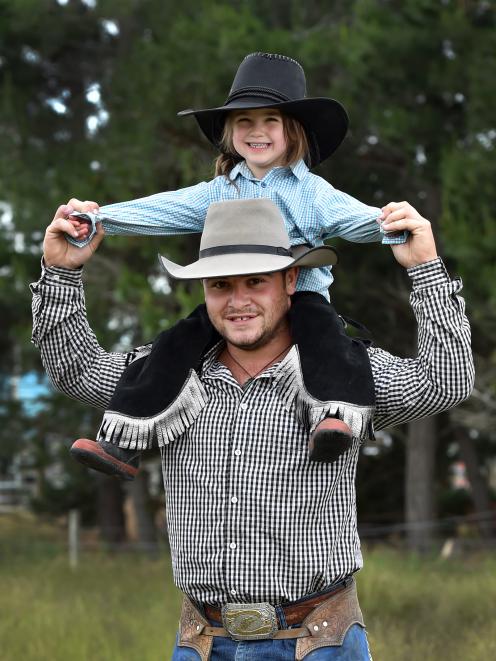 Jenna asked for some chaps to wear just like her hero, so her parents searched online.

They were struggling to find ones for children, so they contacted saddler Eddie Todd, of Hampden.

As it turned out, Mr Todd had made chaps for Mr Church. He made a special black and silver pair for Jenna.

Mr Church said he was surprised — "it was a bit out of the blue" — but he was also proud when he heard he had a young fan.

The Church family has dominated events on the rodeo circuit for decades. Sam’s father, the late Dion, won 15 all-round titles from 1985 to 2004 — the same number as his father, Merv, who is widely regarded as the father of modern rodeo in New Zealand.

Sam had been riding "since before I could walk".

"I had my first competition I think when I was about 4 or 5 years old."

He was flattered to think he was a role model.

Riders had to be "a bit crazy" but if Jenna decided she wanted to be a rider "I’ll be there to help her along", he said.

Jenna met her cowboy hero at the Maniototo Rodeo yesterday, and although she was rather shy, enjoyed spending a short time perched on Mr Church’s shoulders.