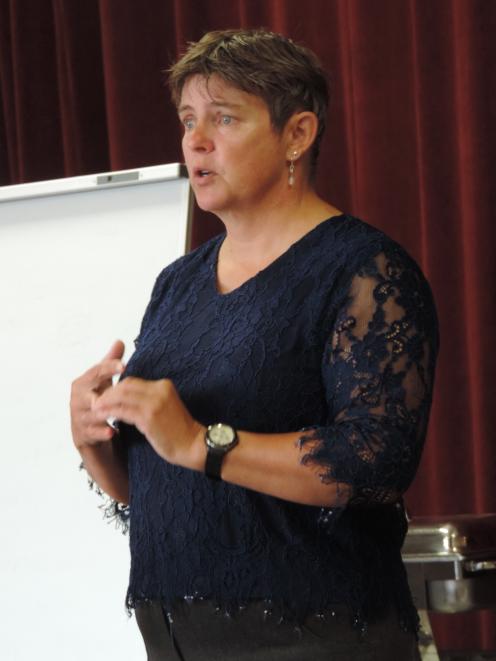 The national Rural Women New Zealand president spoke in Oamaru this month at a workshop called ''A Leading Voice''. Organised by local Rural Women members, it aimed to help women gain confidence, express themselves, and network with like-minded people.

Ms Gower said women's input to the farm and household should be recognised by their peers and family.

And women should take the words ''just'' and ''only'' out of their vocabulary when describing themselves.

She outlined her progression from a ''quiet farm girl with not a lot of self-confidence'' to a leader who influences global policy-makers.

The Lincoln University-trained wool classer encountered setbacks as a woman in a male-dominated industry.

''I learned to suck it up and prove myself by showing what I knew, then educate others.''

Joining Young Farmers and taking part in its activities was ''really good for demonstrating capability''.

After her daughter was born, Ms Gower followed her mother and grandmother into Rural Women. Members ''welcomed, supported, and tolerated me and my children''.

''They recognised I had skills and an attitude that could help the organisation. I'm very grateful to them.''

She went on to the Kellogg programme and Agri-Women's Development Trust Escalator course, became a regional Rural Women representative, then national president.

She has met with the Prime Minister, attended United Nations discussions on empowerment of rural women and girls, was a delegate at the Associated Countrywomen of the World gathering in Australia, and spoke at an international leptospirosis conference.

She warned of the ''imposter syndrome'' that leads people to talk themselves out of roles because they think they won't be good enough.

Ms Gower said relationships and reputation were everything when it came to being a leader.

''It takes time to build up. One little bit of mistrust and it may be ruined. Be true to who you are. You don't have to be liked, but you need to be respected. Forget about the one person who doesn't like you. It's more important to be respected and understood for what you stand for.''

Knowing how to relax and recharge your batteries was another crucial skill.

After receiving a standing ovation, Ms Gower was asked how Rural Women could attract younger members.

She recommended drawing newcomers to a community into the social support network and encourage them to develop their skills and confidence.

''Have activities, go for coffee, start talking about issues. Use Facebook pages to put issues out there. You'll get engagement that way.''