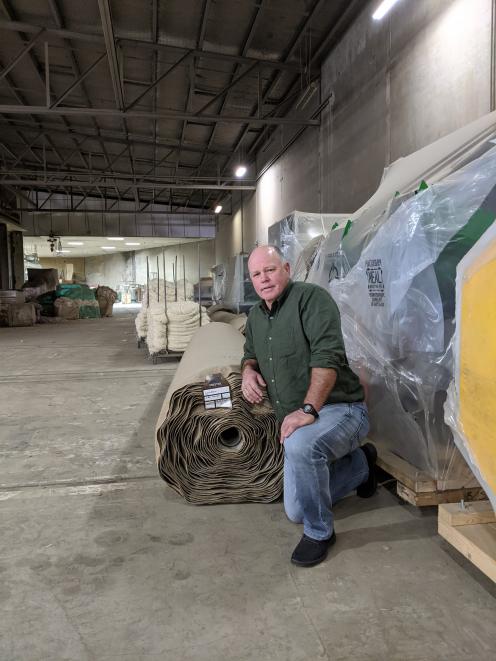 A wool classer and third-generation farmer brought up on his family’s 2200ha property at Paerau in Central Otago, Mr Laurenson said the quality of wool had always been at the forefront of his thinking.

Passionate about the wool industry, he now farmed a 170ha property in Fairlie with Lynsey McIntosh.

"As a wool grower, I think if you cannot use what you grow then there is something wrong.

"It is the same as growing meat and not eating it or being a dairy farmer and not drinking milk.

"I want to put wool that I have grown, on the floor because I know it is good quality and want to utilise it," he said.

With a new 50% equity partner coming on to the Paerau property, Mr Laurenson decided he wanted to spruce up the homestead and use his own wool to do it.

"I have always been interested in using my wool and wanted to walk on something I grew.

"I have had jerseys made out of our wool before, wanting to utilise what I have put years of breeding into.

The farm fleece to farm floor carpet initiative was created.

Farmers just needed to supply shears to NZ Yarn, and it would manage the process.

Mr Laurenson said one batch of yarn would make from three to four house lots of carpet.

He called for a stronger connection between town and country.

He would be interested in getting people out to his farm from cities, in a bid to educate how wool was grown, shorn and all of its potential uses.

"There has been a lot of information put out there that stock are harmed when they were shorn and I say we need a lot more education in New Zealand around it, people in the city need to know more about wool.

"I would be keen to get some people down to the farm that are interested in putting wool carpet in their house, to host them and have them there at shearing time.

"Thirty years ago most people in cities would have an aunt or uncle on a farm and would spend holidays with them but it does not seem to happen now. I think there is a lot of good to be told in what we are doing."

He cringed every time he heard there was a house fire and loss of life.

"If wool was used a lot more in upholstery, carpet and for insulation, houses would be a lot safer.

"It is so frustrating that what we produce is not being used. If there is a time to strike, it is now, with the anti-plastic bag movement happening."