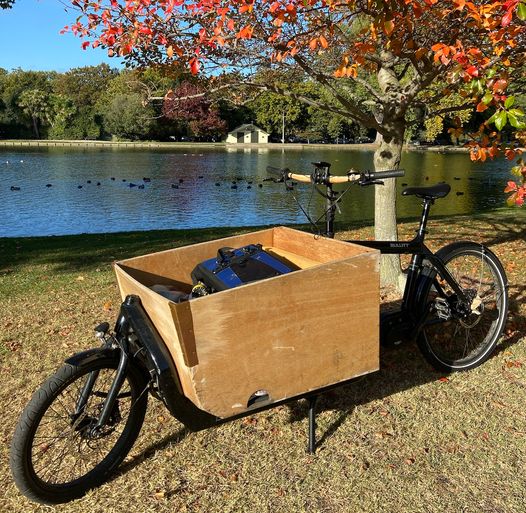 The bucket bike when Al Duncan first brought it to Christchurch from Wellington just over four years ago. Photo: Supplied
The owner of a unique cargo bike that was stolen from his garage is overwhelmed by the supportive response from the community. 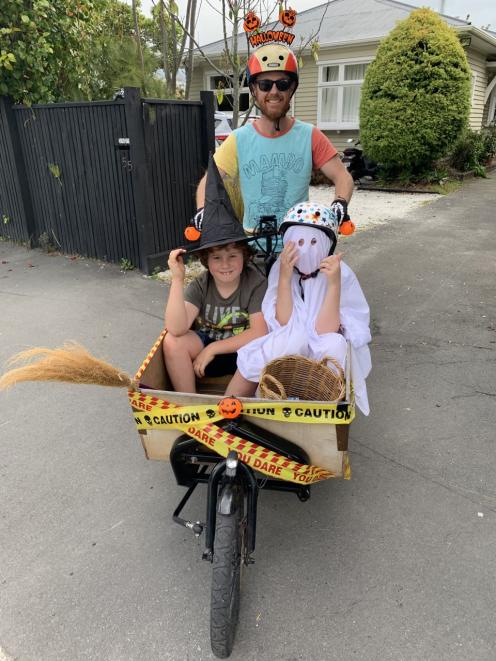 Al Duncan with Neema and Malo. Photo: Supplied
Al Duncan’s bucket bike was stolen earlier this month from his home in Waltham and after nearly three weeks of no sightings, he has decided to replace it.

Duncan bought the bike from Bicycle Junction in Wellington and made the bucket box in his friend’s workshop, after measuring his children to make sure they would fit.

Every morning, Neema, 10, and Malo, 8, would climb in for what many would say is a unique ride to school, 30min across town to Burnside.

However, earlier this month, Duncan left a garage door opener in his unlocked car, which was parked up his driveway.

When he returned that night, he noticed his car was unlocked, so locked it without thinking much of it and put his bike in the garage.

The next morning his garage door was wide open and his bike was gone along with power tools, cycling gear and hiking packs.

He said someone must have taken the garage door opener out of his unlocked car during the day and returned that night to steal his belongings.

“It’s not the kind of bike you can throw in the back of a car and take off because it’s got a really long wheel base so you need a long van or trailer to pick it up and take it somewhere,” Duncan said.

Duncan phoned police to file a report straight away but after not hearing anything back and contacting his insurance company, he has decided to replace the bike.

The bike originally cost Duncan $8000, with extra costs to build the bucket box, but now the price has hiked up to $13,000 due to supply chain issues and inflation, something Duncan is willing to pay to get it replaced.

Al Duncan taking Neema and Malo (front) to school. Photo: Supplied
Duncan was “blown away” by the support he received online about his stolen bike and has more than 30,000 views on his LinkedIn post and more than 100 likes on his Facebook post.

He had received comments from members of the community saying they’ve seen him ride through the city with his kids.

“When you’re on a bike like that and you’ve got kids in it you get people giving you a wide birth and people winding down their window and talking to you at traffic lights and just real engagement with people around you so it’s been really noticed in the community.” 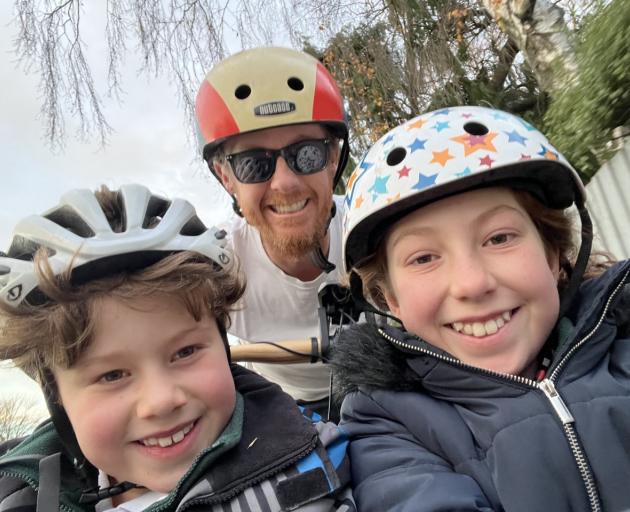 Al Duncan built the bucket box to take his children to school. Photo: Supplied
Duncan said the bike was a big part of time spent with his children, taking it to Little River for a camping trip and taking selfies in it together each time they ride.

“I’ve got four years of pictures of them growing up in the bucket so it’s really close to my heart.”

Duncan said he was nervous to tell Neema and Malo the bike had been stolen but said while they were “gutted” they handled it well and his friend has even let them use his, which is a similar model.

“There’s been a beautiful response from people and I’m really grateful for that,” Duncan said.

“To be burgled is a pretty horrible feeling but to have that love and support around instantly from the community has been uplifting and helps you remember the positive things rather than focusing on the negative.”