'Makes no sense': Move to rule out road repairs in city's east 'frustrating' 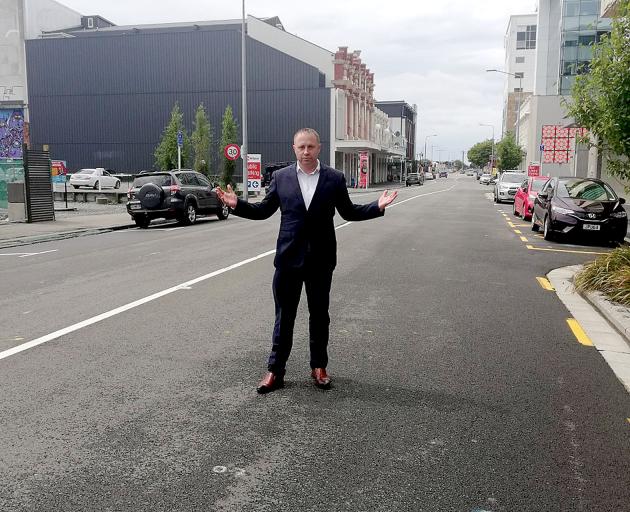 Yani Johanson on Gloucester St in the central city. Photo: Supplied
A local councillor says it was "frustrating" to see work to fix some of the most dilapidated streets in Christchurch's east has not been included in the Annual Plan.

Linwood Ward city councillor Yani Johanson said the decision to rule out his amendment to Christchurch City Council's Annual Plan to fix roads in the east "makes no sense".

The plan has been finalised with funding allocated to various projects around the city.

Johanson had put forward specific streets, which were assessed and costed over the last two years as part of the Capital Acceleration Fund process, in Bromley and North Linwood.

The streets he put forward were Hay, Jollie and Thomas Sts in Bromley, and McLean, Norwich, Carnarvon, Worcester and Dacre Sts in North Linwood.

However, they were ruled out because improvement requirements were unable to be assessed within the timeframe - between the draft amendment being provided and the council meeting - a city council spokesperson said.

"On the face of the potential amendment, even without that assessment being available, the change to the budget would be significant and material requiring consultation," the spokesperson said.

"The council was not able to lawfully make this decision without that further information and without consultation."

Johanson said: "It seems completely contrary to what the whole point of a draft Annual Pan is, which is to listen to people, consult people and respond to the feedback you get."

Johanson said he couldn’t understand why basic roading issues in the east had been ruled out, when the city council was willing to spend $3.4 million on "gold-plating" the central city.

Mayoral candidate Phil Mauger was also disappointed the amendment was ruled out.

Mauger said he thinks it is unnecessary at this stage to spend money digging up a road like Gloucester St in the central city which is perfectly fine while others in the east aren’t.

"We’ve got to get our priorities right ... Yeah, I’m disappointed."

Johanson said other projects needed to be weighed up but "we should be focused on fixing the basics, which came out clearly in the submissions to the city council".

"People want the broken streets in the east fixed, they’re sick of waiting.

"They feel like council’s spending a huge amount of money on other things."

Johanson said said he will be pursuing city council staff and following up on getting roading in the east repaired to a suitable standard.

"To get things done in the east you just have to keep fighting and battling away, and I’ll continue to do that."