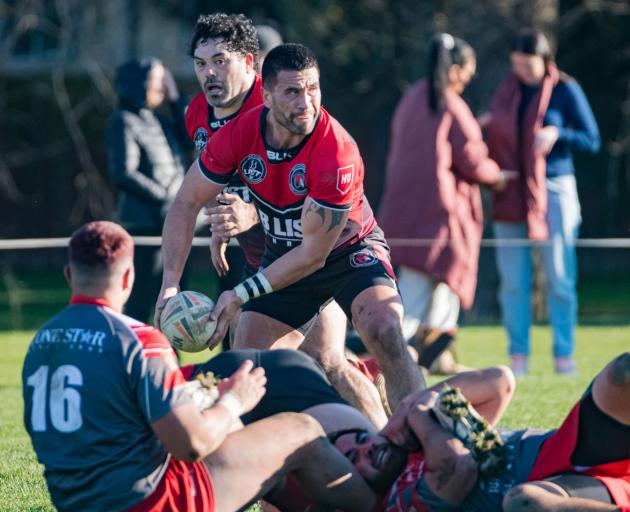 The Hornets have been a revelation under new coach Walter Wilson, continuing their impressive season with a 24-16 victory over the Keas, who needed a late converted try to narrow the margin.

With one round of the regular season remaining tomorrow's clash between confirmed semi-finalists Hornby and Halswell will also influence who claims the Massetti Cup as top of the table before focus turns to securing the Pat Smith Trophy.

Celebration Lions currently occupy the fourth play-off berth, though they face a tough assignment against a Keas side keen to make amends for a sub-par effort at Halswell.

Last year’s beaten grand finalists, the Northern Bulldogs, have been blessed with a final round encounter with winless Papanui, leaving them to rely on Linwood not to suffer rare back-to-back defeats.

Halswell drew 16-16 in their first round clash with the Panthers and head to Leslie Park secure in the knowledge they cannot finish worse than third after several lean seasons.

“Neither of them (Hornby or Linwood) have beaten us yet so you’d have to take some positives out of that,” said coach Walter Wilson, who relished the win over Linwood.

“The boys just backed themselves, it’s been a while … 2014 was the last time our premier side had beaten Linwood. It’s more a belief thing than anything else. We’ve slowly been building week by week.”

Halswell will lose three talented juniors - twins jack and Tom Campbell plus Sofi Taumalolo to the South Island under-18s tournament in Invercargill, though Wilson has benefited from the return to the club of several veterans.

Josh Everett and Toi Sepuloni are back from Australia and Linwood respectively while former Halswell hooker and Canadian representative Brad Austin made his season debut last weekend after a long injury lay-off.

“He’s been sorting himself with an old injury. He’s done a lot of work to get ready. He kept telling me at the weekend ‘my lungs are good’,” Wilson said.

“It’s no accident we’re doing well when you’ve got blokes like that coming back.”

Hornby effectively ended the Eastern Eagles gallant campaign with a 38-26 victory, the Bulldogs climbed back into play-off contention with a 32-18 win over the Celebration Lions while Sean Spooner celebrated his 300th premier grade game in style as Riccarton beat Papanui 46-12.

Spooner, who debuted for Papanui in 2002, won five grand finals with Hornby before the halfback joined the Knights last season. His brother Gene also scored while fellow veteran Justin Lynch notched a hat-trick.

"I wanted to be a leader and try my hand at something different," the 37-year-old said of his move to Riccarton.

"It was a new challenge to really test myself at the back-end of my career."

Marist Albion needed a last-minute try to eliminate HSOB from the title race and they endured another nail-biter with Christchurch before progressing to a semi-final with champions Lincoln University, a rematch of last year’s final.

They protected a 18-15 lead for the final half hour of a defence-orientated clash. 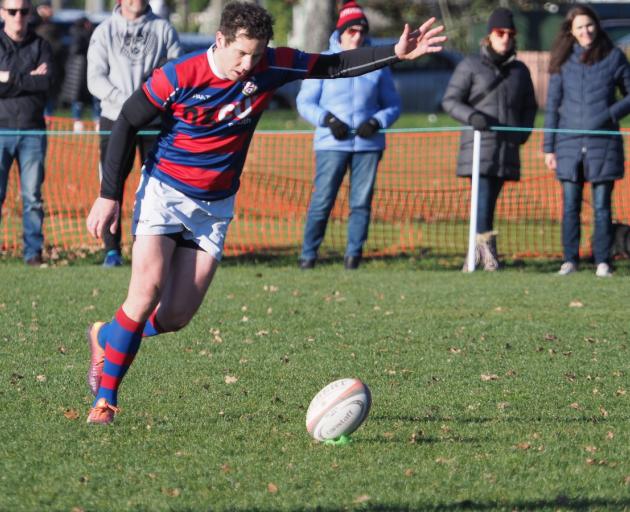 Former Highlanders Super Rugby title-winning first five-eighth Marty Banks nailed four penalties for Sydenham in their sudden-death victory over Linwood. Photo: Bill King
Sydenham will play Burnside for a place in the July 25 final after they beat Linwood 24-20 in another tense match-up.

Cashmere Technical bounced back from their last round loss in the Mainland Football premiership by claiming their fourth round tie with Christchurch United 3-0.

Garbhan Coughlan, the premiership’s golden boot winner with 12, scored twice including the final goal of the match from the penalty spot in the 27th minute to book a quarter-final berth when the next phase of the Cup is held on July 31 to August 1.

The premiership champions now switch focus to the eight-team Southern League, which gets underway tomorrow.

The top two teams after the one round competition qualify for the inaugural National League Championship, along with the top four clubs from the Northern League, top three from the Central League and the Wellington Phoenix reserve team.

In the women’s equivalent of the Chatham Cup, Coastal Spirit St Albans Shirley crushed Dunedin Technical 8-0 in the quarter-finals of the Kate Sheppard Cup, Britney-lee Nicholson led the rout with four goals.

In the women’s competition Marist suffered their first loss of the campaign when they were beaten 2-1 to slip to third on the standings.

Harewood’s men were even more impressive, triumphing 3-0 to now also lead the regular season table by a point after 10 rounds.

Marist have a bye this weekend, with Harewood and Carlton Redcliffs drawn against each other in the game of the round.

Harewood and Carlton Redcliffs also meet in the pick of the men’s fixtures.

Christchurch's premier netball competition had a break last week and resumes on Tuesday.